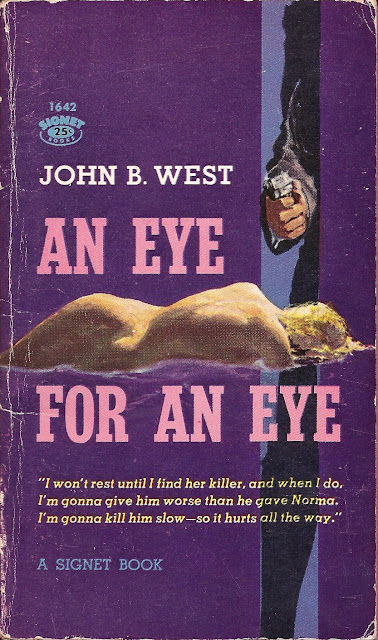 Here's how Signet introduced readers to their new author:

JOHN B. WEST was born in Washington D.C. and educated at Howard University and Harvard University. He holds five academic degrees. Dr. West is a specialist in the prevention and treatment of tropical diseases, and he has a general practice in Liberia, Africa. He also owns and operates the Liberian Broadcasting Company, is President of the National Manufacturing Company and President of the Liberian Hotel and Restaurant Corporation. An Eye for an Eye is his first book. 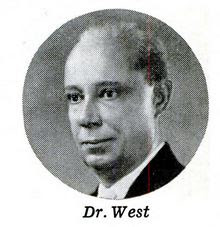 How many paperback readers were sufficiently culturally literate to recognize what "Howard University" and "Liberia" signified? Did they realize they were reading a hard-boiled detective novel by a black man? It probably didn't matter, because West manages the feat of writing an utterly generic crime story in a presumably lily-white milieu, with no reflection whatsoever of his own experiences as a relatively privileged black man. A doctor's son, he first went to Africa in the early 1930s, where he became a special public health advisor to Emperor Haile Selassie. After returning to the U.S. and earning an M.P.H. from Harvard, he became the first black man to be appointed a district health officer in New York City. He went to Liberia during World War II as a major in the Army Medical Corps and stayed on after the war as an important figure in that country's public and private sector. The nearest thing I could find in his biography to a detail relevant to his detective novel career was that he recommended a family friend, Kansas City policeman Leon Jordan, to take over the police force in Monrovia, the Liberian capital. But if West paid special attention to police work it doesn't show in An Eye for an Eye. In this first of five novels produced before his 1960 death in a traffic accident, he gives us the generic tough but fair cop willing to give his detective the benefit of the doubt sometimes, as well as the hothead who hates the shamus's guts for some reason and longs to have him put away. You've seen them hundreds of times if you've read books like these. 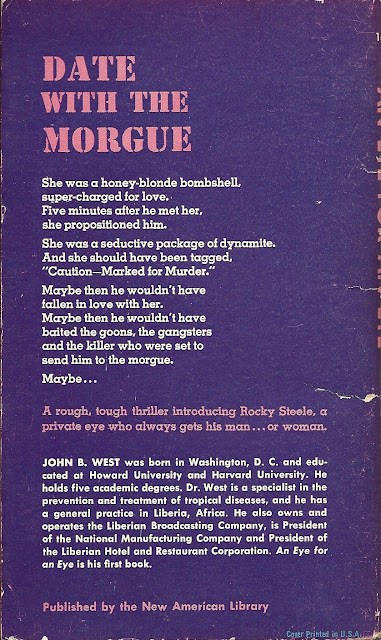 The shamus himself is Rocky Steele, ex-prizefighter and more recently the winner of the Congressional Medal of Honor for valor in the Pacific theater of World War II. He remains a sort of celebrity whom people often recognize from his fight days, but he struggles, as do all of his kind, to keep his office afloat and his pretty secretary paid. A big payday is promised when he's hired to protect Norma Carteret, a sexy heiress, from a kidnap threat issued to her father by extortionists. Rocky takes the job despite a phone warning from a rough voiced man, hereafter "Rough Voice." His first night on the job he bangs Norma. The next day she's dead. Naturally Rocky's a suspect, but naturally Rocky's a better detective than the police, though it takes some roughing up by gangsters to clue him in that he should be looking for the bullet that killed Norma. After roughing up some gangsters they clue him on some names that put him on the vengeance trail, for he has sworn to avenge Norma blood for blood.

An Eye for an Eye is a bloodbath in the Mickey Spillane style. Rocky Steele is fond of gut-shooting people for maximum suffering when they deserve to die, and of course as a private dick he takes frequent beatings himself. Steele's detective method usually consists of learning things from stoolies or beating them out of goons. Those in the latter category that he doesn't kill are soon dispatched by their unforgiving employers. These violent encounters are punctuated with comic-book level tough-guy dialogue as the mystery unravels with blunt monotony. Occasionally, however, West will come up with a scene that at least has some camp value. One such moment comes when Rocky, with secretary Vicky in tow, visits the gay bar ("Fairyland," a cabbie calls it) run by one of his informants, Benny the Dyp. Benny (the "Dyp" is for "dypsomania") will tell Rocky that the man he's after killed Benny's brother back in Chicago, and he will urge Rocky (who needs little urging on this subject) to kill the man, but also to make sure that the man knows before he died that Benny ratted him out. It's in his desire for revenge for his brother that Benny seems to Rocky (he narrates, natch) to almost be a man. Meanwhile, Vicky receives some unwanted attention from the sapphic contingent.

Vicky was taking it in stride now. She could see from the exaggerated masculine swaggering of the half-females and the overdone switching of the half-males that were were in a joint for the third sex. And the fourth. All the men in the place were drooling as they watched me with my arm around Benny, and all the women were giving Vicky the once over....

Vicky was getting the works, too. A wrestler in pants, with two bumps on her chest big enough to hide behind, had slipped up on Vicky's blind side and was giving her the once over with a pair of hands that knew what they were looking for. I could almost see the shivers running up and down Vicky's back. This was gonna be a new experience for her. And I had a hunch it was gonna be a new experience for the wrestler, too. Vicky was frozen stiff, and that was an incentive for her newfound playmate, who sensed virgin territory to be conquered. But she didn't know Vicky. Under that sleek, clinging dress that made her look as soft as the two peaches that stood out on her chest, there lurked a familiarity with judo and jujitsu that I'd taught her. and what she didn't want to give, nobody got. Benny saw it coming, too, and he tittered some more.

The wrestler cooed something in Vicky's ear, and got the best backhand slap in the kisser I'd ever seen Vicky dish out. The wrestler's eyes blazed and she made a grab for Vicky's shoulder, and then mild hell broke loose. Vicky caught her by the hand, and the first thing anybody knew the wrestler was flat on her flat backside, looking up at Vicky from under a table, with a knot rising on her head. I couldn't help laughing out loud. From that point on. Vicky figured to be safe in that joint. Poor Vicky was as red as a sunset in Moscow.


For the record, however, the only "fags" in the novel are Rocky's cigarettes. There's something that'll always be funny about that scene, but at least West meant it that way that time. The scene I found funniest of all is almost certainly unintentionally hilarious. A sub-boss, Tanner, has the drop on Rocky and is busy taunting him when a "well-stacked" woman sneaks into the room. Rocky recognizes her as someone who had given him some info a short time earlier, and he suspects now that she sold him out to Tanner. When she first catches his eye Tanner thinks Rocky is trying to distract him with a variation on the "Look! Behind you!" gag, but he's not going to fall for it. He thus remains arrogantly oblivious as a mortal drama plays out behind him. I'll spare you the full length of it and start in the middle. The broad, clearly hurt bad, approaches Tanner but faints twice in the first paragraph. Here's the second.

She moved again. Slowly -- so slowly -- she pulled herself up once more to stand beside the chair. I could see her better now -- it was like cold clay, and there were blue welts under both eyes. Her hand was pressed against her left breast. She held onto the chair and took a deep breath like it hurt, then she leaned against the chair and slid to the floor again. My pulse was hammering in my ears. I couldn't see why Tanner didn't hear it. She couldn't keep coming like that. She was making it on sheer will power, and it couldn't hold up -- not long enough for her to make that last ten feet. Only ten feet now between me and death. She sat on the floor beside the chair for a minute or two, like a woman in a daze, then she started to pull herself up again, and every muscle in my body was pulling with her. She couldn't make it any more. She slid back down again, exhausted, and my hopes slid with her, but she didn't know how to quit. She came toward us on her hands and knees, every movement spreading pain across her face.Four feet from Tanner's stool she washed out again, flat on the floor, her pale face buried in the warmth of the rug. It was all I could do to keep from trying to make it over the goon with the gun to help her, but I waited, working overtime to keep staring at Tanner so my eyes wouldn't give her away. Every nerve and muscle in my body was tense as a violin string. It was a full five minutes this time before she moved again, pushing to her knees and crawling on toward Mike Tanner's back. Three feet. Two. She stopped. One foot!...


The poor woman needs to make it all the way because she has no gun, and must press her lipstick against Tanner's back to make him think she's packing. I dunno: maybe you found this genuinely suspenseful, but I couldn't help visualizing the scene, imagining it all playing out in a single take and how melodramatically ridiculous the dame would look staggering and stumbling around while this idiot Tanner, enthralled by Rocky's hypnotic gaze, doesn't notice. Apparently he couldn't hear her falling over the roar of Rocky's pulse. There are many ways in which West proves himself a bad writer, from the questionable time management of his plot -- it always seems like a lot more time has passed than Rocky claims -- to his embarrassing renderings of Irish brogue and drunken slur (change every "s" to "sh" and you've got it), but this one takes the cake. Chester Himes he is not. And yet I suppose it was transgressive in some mild way for a black writer to imagine the adventures of a white man, or especially to imagine him making love to a white woman. Believe that or not, you might still believe that West's success as a mystery writer, however tragically short-lived, put him in the vanguard of racial progress just as the Civil Rights movement was gaining strength, for in Signet and its readers he had found an apparently undiscriminating audience.

Posted by Samuel Wilson at 8:07 PM