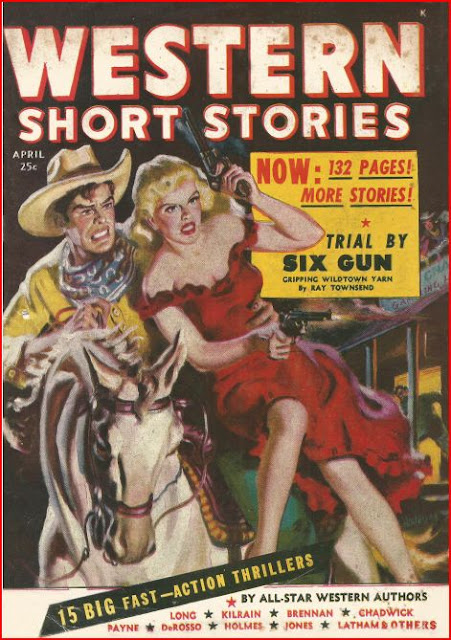 Western Short Stories was one of the titles published by Martin Goodman, the man behind Marvel Comics. In 1949 Goodman called his company Interstate Publishing Corp.; it would have different names at different times. Robert O. Erisman edited their western titles. Goodman's pulps are said to have been low-payers but Erisman could still scare up a decent list of writers for one of his bimonthly titles. This April 1949 issue has such reputable contributors as H. A. DeRosso and D. B. Newton, among others. Clem Yager's name wouldn't have meant anything to western fans because "A Saddlepard for Satan" was his pulp-fiction debut. The FictionMags Index credits Yager with only seven stories total, most for Goodman. Biographically all the Index can say about Yager is that he flourished, so to speak, in the 1940s and 1950s. It's possible "Yager" was a pseudonym for one of the other contributors, since editors and publishers didn't want any author's name to appear twice in one issue. If that's so, I suppose he could be Joseph Payne Brennan, who appears in the same issue as Yager a total of four times, including an issue of Thrilling's Texas Western to indicate that Yager wasn't a Goodman group house name. But it could be that Yager had only a handful of stories in him. His first effort isn't half bad once you get past the overly melodramatic title that was typical of western pulps. 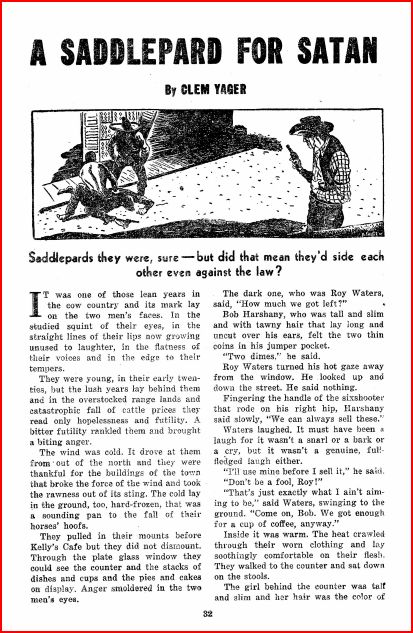 "Saddlepard" is a short piece, only four pages, about hard-times cowboys forced by poverty to desperate measures. "It was one of those lean years in the cow country," it opens, "and its mark lay on the two men's faces." Bob Harshany and Roy Waters are down to their last two dimes, but Roy's too "touchy" to accept charity from the girl in the cafe. As Bob tells the waitress, Roy doesn't want to be like his "no-good drunken bum" of a father, "always beggin' a handout." Roy would rather rob a saloon instead, but the real story is Roy's moral dilemma. He tries to talk Roy out of his plan but Roy pulls a gun on him and warns him not to interfere. Feeling helpless, Bob waits for the inevitable disaster. But when he hears the shots, "In that brief instant Harshany's decision was made. Gone was that stubborn faith of his. He knew only that he had an obligation born out of years of friendship and, right or wrong, he, Bob Harshany was going to stick by his partner." Yet when Roy sees him yelling, "I'm with you, Roy," he opens fire on Bob. Finally Bob has to return fire to save his own life, mortally wounding his best if not only friend, who lies raving against Bob's interference in his plans. The ending gets a bit corny once Bob realizes, by looking into Roy's "pleading" eyes, that his friend is denouncing him in order to confirm his innocence to the public, which shows plenty of presence of mind for a dying man. It makes you wonder whether Roy made a snap decision to die by Bob's hand, plausibly or not. It's an awkward effort to salvage a sort of happy ending out of an awful situation, but overall Yager does a good job quickly establishing the hard times and the two men's desperation without getting overwrought about it. I'm still making my way through this issue, which is available online through Yahoo's Pulpscans newsgroup, and with most of the bigger names still to come I'd say it was the best entry I've read so far. We'll see how that holds up.
Posted by Samuel Wilson at 4:11 PM