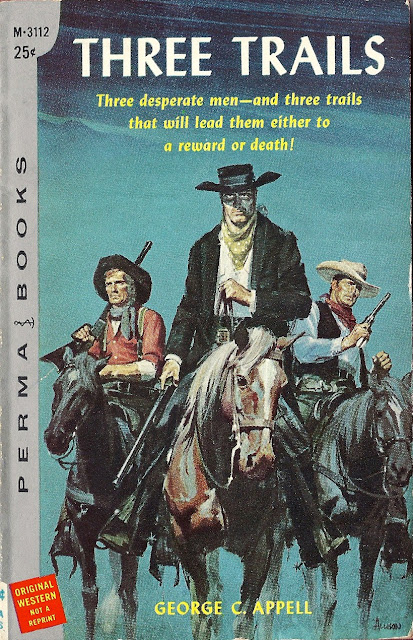 As it happens, Appell's first published story appeared in Collier's in 1944, but apart from a couple of stories in Esquire he was a pulp writer from then on, working the western mags until almost the bitter end of the era. Like many pulpsters he moved into paperback originals (and the occasional hardcover) as the pulps lost favor. I liked most of the stories and novelettes of his that I've read, so I was eager to give one of his long-form works a try. Three Trails is a grim tale of a manhunt spiraling out of control. At the behest of a federal commissioner, a corrupt marshal assigns three deputies to capture Shad Kruger, a gunman who's worked on and off as an enforcer for the marshal. Naturally he assigns his three most expendable men to the task. Kendon Sheppard is a rival to the marshal, even though his father was a marshal who died under questionable circumstances with a cloud of corruption over him. Preacher Cole, a layman despite his name, simply hasn't proven useful to the marshal, failing to use his personal popularity to promote his boss's political career. Buford "Chink" Lee, is sort of like Kruger, acting as the marshal's muscle in shady dealings at the other end of the territory and probably knowing too much about those dealings for his own good. The novel gets its title from the deputies' plan to arrive in Cold Spring one at a time, by different routes, so that if Kruger gets wind of one of them coming, the other two have a chance to intercept him if he leaves town. Since that plan quickly falls apart, the title more accurately describes what we'd now call the character arcs of the three deputies. 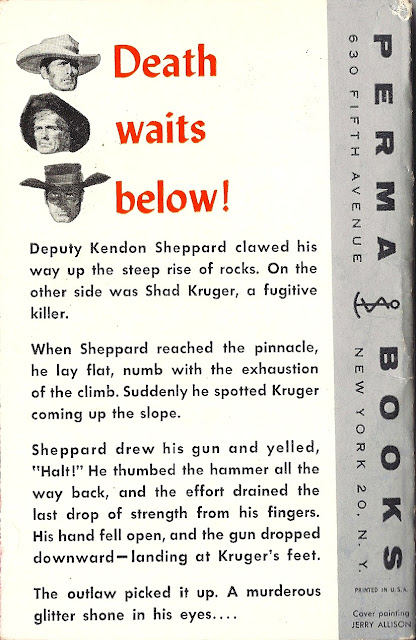 The deputies aren't really equal as artistic creations. By far the most fascinating of the three is Chink Lee -- he's white but his eyes slant a bit -- who we learn once rode with the James Gang and, in this reality, betrayed them at Northfield. Lee is a tale-spinner who likes to talk of his father the war hero who knew General Grant, but he's pretty much trash. He's ruthless and mostly unrepentant about it, but his cunning sometimes runs ahead of his brains -- or would it be vice versa? His plan initially is to find some way to get all of the $20,000 reward promised to the deputies for himself. His first step is to convince Preacher Cole to travel with him instead of taking his own trail, the idea being that Cole will walk point and probably get shot while Lee swoops in to nab Kruger. That marks him as a bad guy in our eyes for a while, and he never fully evolves into a good guy, but what makes him fascinating is how Appell brilliantly describes Lee's erratic, contradictory personality. At different points he rivals Sheppard for a doctor's daughter and lusts after Cole's wife, but his heart ultimately belongs to Trixie (she prefers "Tricia" and "Buford") the sickly saloon girl. Lee's plans change on the fly over the course of the novel, and for the most part the changes seem plausible rather than contrived. Sheppard and Cole pale by comparison. Sheppard has a standard vengeance/redemption plot, with a long-term motive to clear his father's name, and he has little personality beyond that. Preacher Cole is described as looking like a worried Abraham Lincoln, inspiring me instantly to cast Royal Dano in my dream movie version. His role is basically that of an anxious family man who knows this will be his last job for the marshal one way or another, and that the reward for Kruger is his only hope of providing for his family and proving himself a man. He's not the sap Lee initially takes him for, since the commissioner secretly ordered him to spy on Chink, but his self-doubt defines him until he discovers what he's capable of under pressure. If Sheppard and Cole aren't as compelling creations as Chink Lee, the three deputies' interaction with each other at least keeps everyone in the same room.

One reason Chink Lee's plans keep changing, apart from the influence of the woman nearest him, is that the plan to capture Shad Kruger quickly goes to pieces as the deputies proceed from disaster to disaster. They're concerned from the start that Kruger will have men with him in Cold Spring, but it's not until they get there that they realize how horribly outnumbered they are. In short order they find themselves under siege in a hotel room. Their best option seems to be Lee's harebrained scheme to lure one of Kruger's men, a rival of Lee's for Trixie's affections, into getting captured by negotiating with him for Trixie's safe conduct out of the hotel. This actually works until Chink learns that while he and Trixie were negotiating more of Kruger's men got into the hotel room and disarmed Sheppard and Cole. This predicament climaxes in a horrific gunfight, with Lee using his hostage as a human shield and Trixie suffering collateral damage. Now our deputies are holed up in a hotel room full of dead men and the dying Trixie. In an absurdly macabre touch, the deputies find Trixie's handbag after she expires and apply her mascara to their faces in a desperate effort to disguise themselves -- inspired by Chink, in a fog of mourning, drawing cat whiskers on his face the way Trixie used to -- before they try to escape via a dumb waiter to the basement. They go through the remainder of the novel looking like bad stage actors, and that may have been Appell's way of commenting on the improbability of their escape and eventual victory (not for all three, however) over Kruger, which comes with the destruction of Cold Spring by fire and a tense chase through the wilderness before things are settled for good. Three Trails anticlimaxes a bit after the exit of a major character, but it's a dark, dramatic western well worth reading. Appell goes overboard a little early on spelling out every character's motivation, but once he has a handle on them he builds tension and momentum effectively. He slips up on detail every once in a while, most noticeably when he describes two exit wounds in Trixie's back but has Preacher contemplating probing for the bullets three pages later, but that's something an editor should have caught. In creating character, mood and suspense, Three Trails is a clear success that has me looking forward to reading another Appell in my collection later this year.
Posted by Samuel Wilson at 3:54 PM