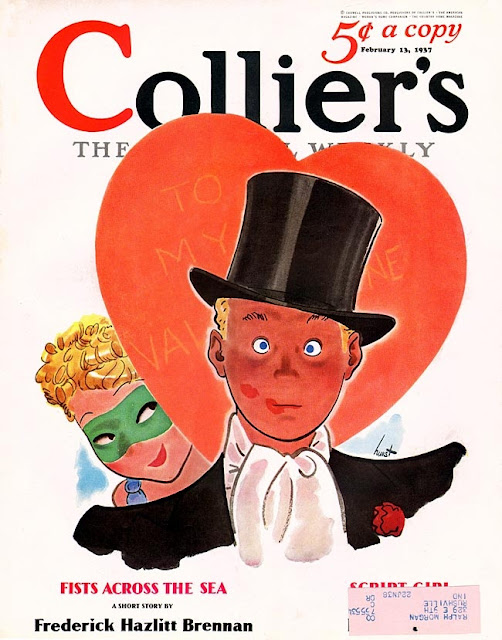 A Valentine's cover by Earl Oliver Hurst fronts a Collier's with plenty of pulpish content. Ernest Haycox makes his typical contribution with the penultimate chapter of the serial Deep West, while Sidney Herschel Small closes out his historical series about the Bartlett family of Asia traders with the modern-dress piece "Orient Packet." This issue's short-short story ("Complete on this Page") is by Robert Ormond Case, a veteran pulpster who got his start in Western Story back in 1923. He stuck to Street & Smith for about a decade before making his first slick sales to The Country Gentleman (from the publishers of The Saturday Evening Post)in 1931. He made his Collier's debut with a short-short in 1932 and managed to land something in the National Weekly about once a year after that. Case didn't really hit his stride in the slicks until the 1950s, when he published several serials in the Post. His last pulp story appeared in a 1951 Blue Book. This issue's "Expert Witness," which might have come in at 2-3 pages in a pulp, pins the fate of an accused murderer on his old friend's ability to measure time without consulting a clock, though we learn that his stunt isn't as prodigal as jurors might believe. Hugh Wiley traveled a different path, turning to the pulps relatively late in his career after starting out in the slicks. For Collier's he created a character almost tailor-made for pulp; James Lee Wong was that magazine's answer to Earl Derr Biggers' Charlie Chan, whose adventures first appeared as Post serials. Wong was popular enough to inspire a Poverty Row movie series that missed the point of the character by casting Boris Karloff to play him. Wiley's idea was something more like the opposite of Charlie Chan: a handsome young man so thoroughly Americanized (though he can play the traditional scholar when he pleases) that he can virtually pass for white as "James Lee." Monogram finally smartened up and cast Keye Luke as Wong for the final film in their series, while Wiley brought his character to Blue Book in 1940, his debut there appearing almost simultaneously with Wong's last Collier's story.  Frederick Hazlitt Brennan was a slickster all the way, apart from a 1945 Argosy story when that magazine arguably didn't count as pulp anymore, but his comic tales for Collier's about the brawling sailors Linn and Dunnevan wouldn't have seemed out of place on rougher paper. Finally, Octavus Roy Cohen was all over the pulps in the 1910s but by the end of the decade had become a regular with The Saturday Evening Post, one of his most popular features being a black-dialect series about Florian Slappey. He started appearing in Collier's regularly by the mid-1920s and tended to do longer stories there like the serial I Love You Again, Part III of which appears in this issue, and which was made into a 1940 film vehicle for Myrna Loy and William Powell. As always, check out all the contents of this issue in inglorious black and white at unz.org.
Posted by Samuel Wilson at 12:50 PM