They March From Yesterday 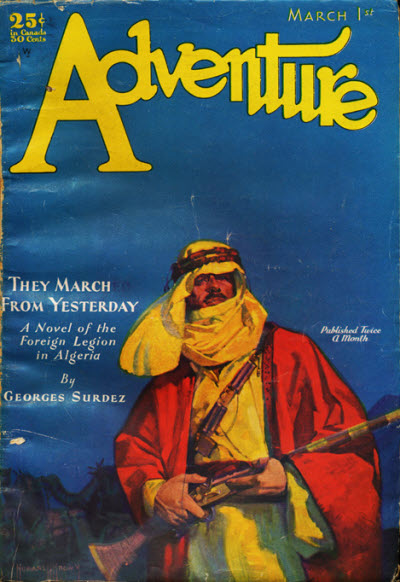 In the golden age of Adventure, when Arthur Sullivant Hoffman was the editor, star writers like Georges Surdez could publish something like a genuine novel of 60 or more dense two-column pages in a single issue. Later editors may not have liked to see one writer take up so much space, even in a 192 page magazine. That might explain Surdez's "They March From Yesterday," which totals 56 pages, being split between the March 1 and March 15, 1930 issues. Having read both parts, thanks to Foreign Legion fan Jack Wagner's Mon Legionnaire blog, I suspect that Surdez may have been asked to pad his story into a two-parter. The story in its basic form follows the American Peter Kempton, who joins the Legion under the name Edouard Maguil to escape the gangsters who killed his stepfather back in New York City. As one might expect in such a story, one of those gangsters has joined the Legion himself to escape the law. This gives Surdez an opportunity to refute the legend, exploited by other writers, of the Legion sheltering fugitives from justice. Contrary to "the most false among the false tales told of the Legion," if his superiors learned Legionnaire Recki's true identity they'd turn him over upon his government's request. What really protects Recki, alias Siskow, is that "if there was scorn for the assassin, there was scorn for a denouncer." In other words, no one likes a snitch. In fact, Kempton/Maguil finds himself almost liking Siskow/Recki because the onetime criminal is so guileless in his homesick desire to befriend anyone who speaks English, and especially a fellow American, even after he learns Maguil's true identity. "Recki, endowed with human speech, was nevertheless an animal," Maguil thinks of him, "Here was a fortunate organism in which remorse finds no place." Yet Recki proves a sympathetically enigmatic character, willing to risk his life alongside Maguil on a rescue mission because they'd agreed to let the fortunes of battle decide whether Maguil will be around to denounce Recki, or whether Recki will be around to be denounced. 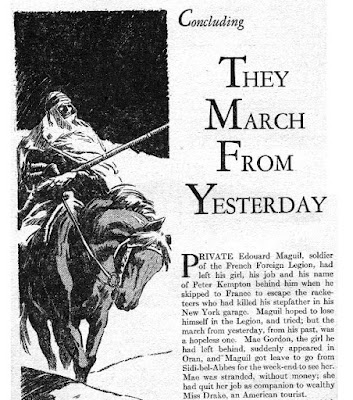 Unlikely male bonding is at the core of Legion pulp, but smack in the middle of "Yesterday" an episode that reads as if Surdez was trying to break into Fight Stories. On leave, Maguil is trying to raise money so his American girlfriend, who had foolishly come to Africa looking for him, can go home. Two Legion "buddies" talk him into entering the ring to replace an American contender in a bout with a local hero. "They'll want to see an American take it on the chin for a change," the promoter says of the local fans, but a Legionnaire is no mere pug and, despite a cliffhanger ending the first installment, Maguil wins the fight, only to be robbed by his deserting buddies and left to be framed for murder. He's court-martialed, acquitted and returned to the Legion, ending the story's superfluous middle section. The rest of it on either side is all right, though its more a sequence of set pieces than a truly novelistic story. You get a long march through the desert, the distance measured by telegraph poles and a big battle scene in each installment. By the end you get the feeling that Recki interested Surdez more than Maguil, who is almost a generic hero toughened and refined by Legion duty and discipline. Surdez is always very readable, and the Foreign Legion genre as a whole intrigues me both in its mostly unapologetic imperialism and its rite-of-passage aspect of manhood discovered through ordeal. "They March From Yesterday" isn't top-flight Surdez, but Surdez himself is nearly always top-flight pulp, and this wouldn't be a bad introduction to him.

The March 1, 1930 Adventure is available in its entirety online through Yahoo's Pulpscans group, but the Mon Legionnaire blog has Part One of "They March From Yesterday" as a separate file here. Wagner scanned Part Two from his own collection and made it available here.
Posted by Samuel Wilson at 7:21 PM