'This is Russia. You can jump into the sea or get a Cossack lance through your gizzard -- no other choice.' 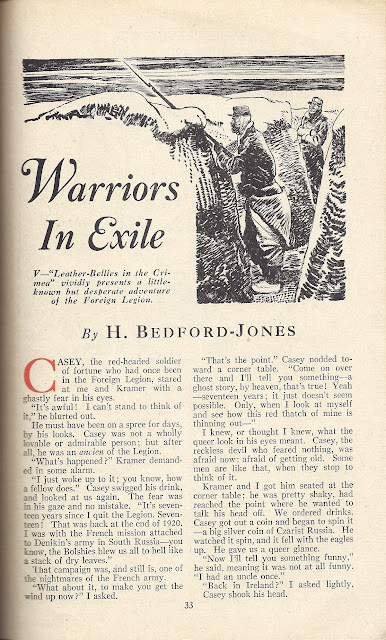 H. Bedford-Jones was one of the more plausible claimants to the title "King of the Pulps." Versatile in many genres, and under many names, he perfected the gimmick of creating themed series of stories. Blue Book published many of these series, under HBJ's own name or using his favorite alias, Gordon Keyne. These anthologies often ranged all over history, but the "Warriors in Exile" series had a more narrow focus on the French Foreign Legion. "Leather-Bellies in the Crimea" (Blue Book, October 1937) reads a little like one of Theodore Roscoe's Thibaut Corday tall tales, introducing an element of the supernatural into an otherwise conventional Legion story. Like many of Bedford-Jones' anthology stories, the meat of this one is the story within the story. He often wrote in a once-removed style typical of an earlier era, in which we have to be introduced to the narrator of the main story as a character in a framing device. The narrator is Casey, a retired Irish Legionnaire and, predictably enough, a drunk. He recounts an eerie experience he had while serving with the Legion in support of the Whites against the Reds in the Russian civil war. In the Crimea Casey encountered a big man who was the spitting image of his long-lost uncle who had served in Russia with the Legion during the Crimean War in the 1850s. Sight of this surprising figure inspires a vision that Casey takes to be an actual episode from the life of his Uncle Teague, and this is the true meat of the story, told by an omniscient narrator rather than present-day Casey.

Teague Casey isn't a good fit with the Foreign Legion. He'd started out with the British Army, apparently, but had deserted. "He was the type of man who rebels at discipline; and he was in the most highly disciplined corps in the world, as he had found to his sorrow, Little they cared whether he were a British deserter or not -- they needed every man they could get." On the other hand, "A Legionnaire, as he had found, could get away with anything." He has no trouble sneaking out of camp to fraternize in a nearby Russian village where the food and drink are better, where a Cossack peddler speaks English suspiciously well, and the peddler's daughter is pretty. The peddler is happy to get stray Legionnaires drunk and pump them for information about their troop strength, but his daughter is smitten with Teague and warns him to call "tails" any time her father invites him to wager anything on a coin flip. The peddler proves a good sport about this and warns Teague, who plans to desert once more, to play sick at his post next morning. Hung over, Teague nevertheless forgets to do this, for otherwise Bedford-Jones could not describe the battle so vividly. Teague can't help but distinguish himself in combat, earning a promotion, but he deserts anyway.

This seems like a simple story without a moral, but there remains the question of whether the story is true. Present-day Casey's two interlocutors debate whether it's possible for him to have had an authentic vision, or whether this was all a drunken yarn. They finally determine that it probably was the truth, since Casey had included a detail very few people (apart from H. Bedford-Jones and anyone who read the same sources he had) would have known, namely that Legionnaires in the Crimea wore wooden sabots rather than proper boots. Since Casey isn't "the sort to probe into [the Legion's] history and traditions," the agree patronizingly, he must have seen a ghost, or possibly the then-still-living and very old man. These stories (HBJ's, that is) seem tailor made for radio anthology shows, and it wouldn't surprise me if he'd tried to get such a thing going at some point. I'm not sure why he or Blue Book needed this excuse to write stories, but the gimmick seemed to work for them, as he kept at it (in Short Stories as well) until his death. Sometimes the framing devices are worse than superfluous (e.g. the recurring narrator of "Famous Escapes," a deaf-mute convict who somehow communicated the details through sign language) but the stories themselves are usually good samples of Bedford-Jones' effortless, often-engaging style. You might get impatient for the actual story to start, but once it did it usually was pretty good.
Posted by Samuel Wilson at 5:54 PM