"Strange indeed were the ways of the umlungu!" 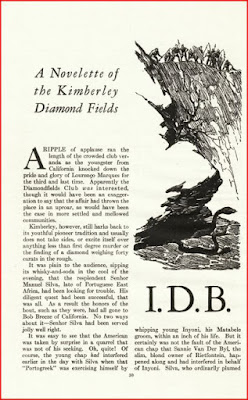 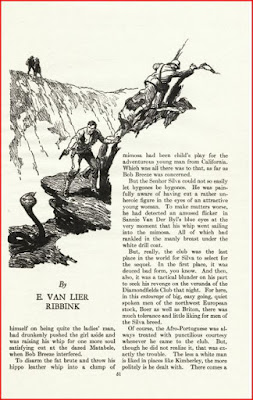 I. D. B. stands for "Illicit Diamond Buying." In pulp days, that meant taking diamonds out of South Africa without going through the De Beers company. In pulp fiction, the most famous illicit diamond buyer was L. Patrick Greene's "Major." Who was E. Van Lier Ribbink to poach on Greene's ground? Was that even a real name? It certainly was. Ribbink wrote a handful of stories for Adventure and Everybody's Magazine, but his real calling was journalism, a profession in which he rose to an editorship. His few stories draw on his South African background. "I.D.B." (Adventure, March 1, 1930) is only incidentally about diamond buying. Its hero, Bob Breeze, is the typical guileless American seeking his fortune in South Africa. He gets entrapped into buying a diamond illicitly by a personal enemy, the sleazy "Portogreek" Manuel Silva ("for thus are men of a certain degree of swarthiness styled in Africa"). Bob makes an enemy of Silva by intervening when the Portogreek beats one of his Matabele servants. Silva conspires with a corrupt policeman to set Bob up by having an old native offer the American a diamond, with the promise of secret knowledge of a rich mine. The judge recognizes how Bob has been tricked, but the best he can do for the young American in court is impose the minimum sentence of six months in prison. He doesn't even stay a whole day. The Matabele man he'd rescued earlier is now working for a brave, virtuous Boer lady, who has sent him to break Bob out of prison. In classic H. Rider Haggard fashion, this young man is a prince of his tribe, sent out to earn his own way and learn something of white ways before inheriting power. He thus can guarantee safe conduct for Bob, the girl and her trusty right-hand man in his father's kraal. The chief in turn promises his protection against the pursuing policeman and Silva, whom he'll throw off the good guys' trail with something like the same diamond trick they pulled on Bob. The Matabele think they've worked things out perfectly for their new white friends, but when Bob learns that his enemies are headed for a snake-pit death trap, to the amusement of his protectors, he can't permit it to happen. "My God, we can not let them do that," he says, "It's unspeakable. Those fellows may be scoundrels and criminals, but they are human beings. We've got to stop it." To his credit, he doesn't say, "but they are white." His noble sentiments don't stop the irredeemable Silva from death by snakebite, but the British policeman is saved with great difficulty. Inyoni, the Matabele prince, accepts this with a shrug. "Strange indeed were the ways of the umlungu," he muses of his white friends as he goes to the rescue with them.

The most interesting thing about "I.D.B." is its careful observation of racial hierarchies. Beyond the obvious differentiation of black and white, there's a clear feeling that "Portogreeks" like Silva are inferior to the Boers and British (and Americans) while the Matabele (and Zulus) are acknowledged as a higher order of native, despite their proclivity for E.C. Comics style justice. This race-consciousness grates on modern sensibilities but Ribbink's story at least has the virtue of honesty about the subject, rather than the idealistic, err, whitewashing of the subject in some modern genre fiction. Ribbink doesn't have L. Patrick Greene or The Major's panache, and Inyoni is a poor substitute for Jim the Hottentot. But it's still an interesting read if only as a document of South Africa as pulp consciousness imagined it.
Posted by Samuel Wilson at 7:39 PM