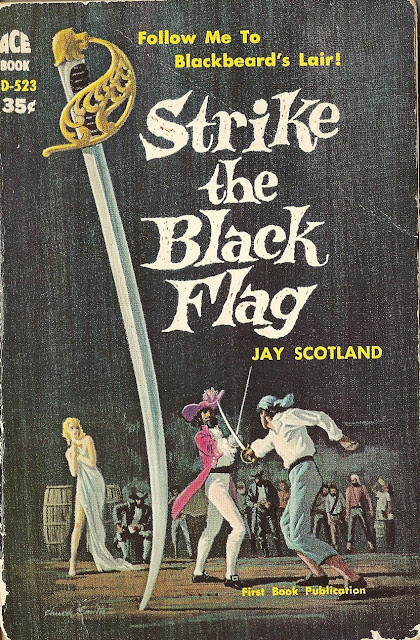 John Jakes, who turns 85 this year, is one of the last-surviving writers to appear in an actual pulp magazine, if not the last living western pulp writer. He broke in while still a teenager and was successful enough to have his name mentioned on some magazine covers. Yet when he remade himself into a historical novelist at the end of the pulp era, he was told that his name was to bland for the genre. Little did that editor know that John Jakes would become one of the most successful brand names in historical fiction during the 1970s. In the 1960s, we got "Jay Scotland." One of his subjects was the last days of piracy in Jamaica in the early 18th century. This happens to be the subject matter of one of my favorite current TV shows, the Starz series Black Sails, now in the middle of its final season. The gimmick of Black Sails is that the historical pirates of Nassau interact with characters invented by Robert Louis Stevenson, making he pirate saga a prequel to his beloved novel Treasure Island. It takes creative license with the historical characters on the premise that their careers would be altered by the interventions of both the Stevenson characters and entirely original characters invented for the show. For instance, Edward "Blackbeard" Teach has just made his exit, but instead of going down fighting, as is understood to have been the actual case, he is captured, along with fellow historical figures Jack Rackham and Anne Bonny, and is put to death by keel-hauling on the direct order of real-life pirate nemesis Woodes Rogers. Jakes/Scotland takes similar license with history by introducing his own hero, Gideon Clark, and making him quartermaster for historical pirate Charles Vane, his exploits and those of others eventually changing Vane's fate. When I started watching Black Sails, I noticed that the Nassau pirates hadn't been used much in movies, though Anne Bonny provided a vague template for numerous female pirates. The Starz show has succeeded so well at making them tremendous antiheroes that I've been left wondering even more. Unfortunately, that makes it hard not to judge Strike the Black Flag's versions of these characters by what's been done on television, and to find the "Scottish" pirates somewhat wanting. 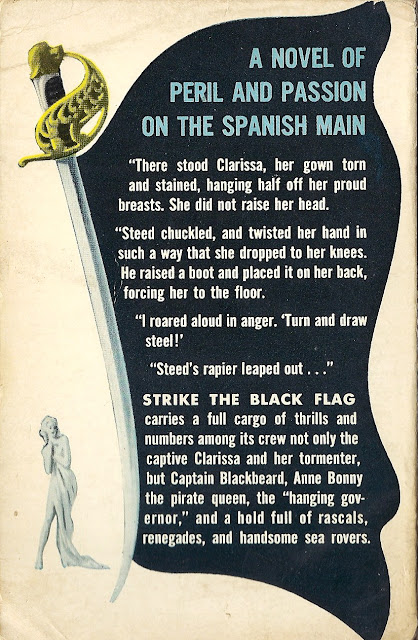 Jakes' Charles Vane is a dissolute brute with none of the thuggish charisma or redeeming heroism that Zach McGowan gave the character before his third-season exit. The historic Vane was hanged rather ignominiously, but the Black Sails Vane becomes a martyr embodying resistance to Redcoat tyranny. In Strike the Black Flag Vane is murdered offstage (apparently) by Clive Steed, the novel's main villain and a fictionalized version of Stede Bonnet, the dilettante pirate who consorted with Teach and Vane. As quartermaster of Vane's ship, Gideon Clark is a target for the ambitious Jack Rackam (to use Jakes' spelling), who again has none of the redeeming qualities of the TV Rackham. Historically Rackham and Anne Bonny were a pair, and Black Sails treats them that way -- sometimes with an extra woman thrown in as, apparently, in real life. Strike the Black Flag gets there eventually, but the immediate problem Bonny poses for Gideon Clark is as the likely avenger of her husband James Bonny, a member of Vane's crew whom Clark had to kill in self-defense. It's pretty universally acknowledged that Clark is in a world of trouble once Anne finds out what's happened. As a female pirate, and one who reportedly showed more courage and ferocity than Calico Jack Rackham, Anne Bonny has fascinated people for the last 300 years. Unsurprisingly in our time, Black Sails presents her as something of a superwoman, just about unstoppable in hand-to-hand combat. Just in last week's episode, forced to fight a burly, sledgehammer-wielding British marine with no weapons of her own, Anne manages to spark the liberation of her fellow pirate-captives with a couple of bits of broken glass, despite taking a terrible beating. Jakes' Anne is not quite this sort of female fury, but Gideon Clark would "sooner swim in a hurricane than face her....A woman who learns to live among men like us must have twice the craft and savagery of the male." Yet one someone finally attacks him, he's surprised to find that it's Anne, she of the "impudent breasts" and the "stormy grey beauty of her eyes." She's vicious with a dagger but vulnerable to a forearm to the jaw. The eventual alliance of Anne and Jack creates a problem for Gideon Clark's future, which Jakes leaves open-ended with a sequel in mind. I'd rather have that sequel than the actual book, since Clive Steed never manages to fascinate like the historical pirates.  Stike the Black Flag wraps up with Clark rescuing the novel's good girl Clarissa Harlow -- erudite Jakes named her after Samuel Richardson's epistolary heroine -- from Rackam and Clive Steed's clutches, while Blackbeard goes to his fate, only for a lookalike to scare off the Spanish fleet at a convenient moment. Black Flag strikes me as a novel written mainly for the money, but conscientiously so, as his Author's Note explaining the mix of fact and fiction testifies. I didn't find it very memorable, but it was doomed to an unfair comparison once I saw Black Sails first.
Posted by Samuel Wilson at 4:07 PM