"Shame rode her this morning, and in Burt stirred a peculiar compassion for her shame." 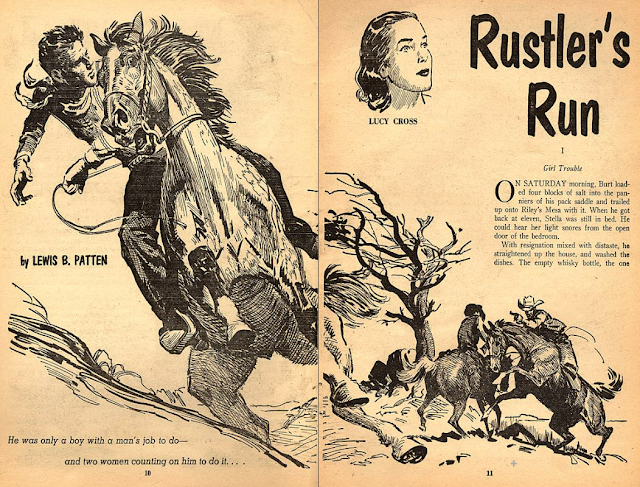 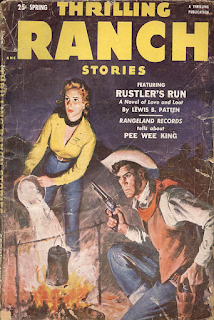 When the Thrilling Group acquired Ranch Romances in 1950, it had been publishing an imitation title of its own, Thrilling Ranch Stories, since late 1933. Thrilling Ranch wasn't the phenomenon Ranch Romances was; while the latter continued to be published twice a month as late as 1958, the best Thrilling Ranch could manage was a monthly schedule from mid-1934 through early 1938. Most of the time it came out bimonthly, and after Ranch Romances made it superfluous it finished its run as a quarterly from the summer of 1950 through the fall of 1953. Needless to say, many of the same writers appeared in both titles, including rising star Lewis B. Patten, whose "Rustler's Run" was the lead novelette in the Spring 1953 Thrilling Ranch Stories. Judging by his story alone, Thrilling Ranch had much the same content as Ranch Romances, tougher tales than the "Romance" (or "Ranch") label might suggest but with more consideration of human emotion. If anything, "Rustler's Run" tips more heavily toward romance than a lot of the Ranch Romances stuff I've seen. The genre plot about rustlers and their hidden passage in the hills doesn't seem to interest Patten as much as the sad lives of his two protagonist families and their redemption through merger. Burt Norden is a young rancher whose father's murder has broken his mother's spirit. Stella Norden has become a drunk desperately seeking companionship from any man who ambles along, bringing a shame on her family that she feels acutely whenever she sobers up. Burt resents his circumstances but can't bring himself to hate or break ties with his mother, even though her downward spiral handicaps his own social life. He hopes to court Lucy Cross, daughter of a neighbor rancher who has his own cross to bear in the form of a slowly dying wife. Burt has a rival in the form of "blocky and savage" Mitch Riorson, a thug from a family of thugs who conveniently turn out to be the mystery rustlers. Patten intercuts from Burt's fights with the Riorsons to the final days of Mrs. Cross, who in her moribund saintliness urges husband John to hook up -- she phrases it more delicately, of course, -- with her old friend Stella Norden so he won't be lonely and Lucy will still have a mother. The fist and gunfights are rote stuff but Patten puts more effort into the deathbed scenes and the tense mornings in the Norden home, maybe because that's what Thrilling Ranch readers expected and possibly because those moments of bereavement and regret, cliche though they also may be, came closer to home for him. The story effectively ends once it becomes clear that Stella, now cleaned up for good, will marry John Cross. That makes it okay for John to take time on the day of his wife's funeral to rescue Burt from pursuing rustlers, and it allows Patten to end the story quite abruptly, mentioning the offstage capture of the Riorsons and Mitch's hanging in a final paragraph. Of course, that might have been editor Fanny Ellsworth's axe falling rather than Patten's own decision, but it still shows where readers' priorities were presumed to be.
Posted by Samuel Wilson at 3:55 PM