'A little matter of blood. There haven't been so many Africans in Ireland.' 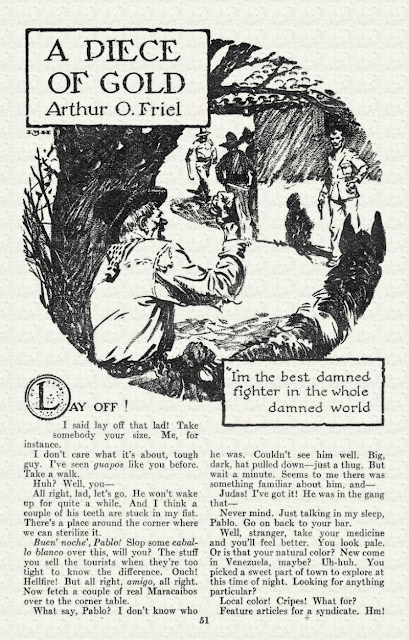 The man known only as Dugan was Arthur O. Friel's last major series character. The intellectual property of his author rather than a publisher, Dugan appeared in both Adventure and Short Stories during 1938 and 1939, if not later. He was one of Friel's typical American adventurers in South America, if more of a tough-guy loner than his predecessors. "A Piece of Gold" (Adventure, January 1939) finds him a hungry wanderer in Venezuela until he discovers a party of men roasting beef. He joins in uninvited and gets into a fight, which of course he wins. The situation seems to be defused by the appearance of the men's leader, a young "high class" Spaniard who offers him more meat to travel on, but Dugan only makes matters worse by offering to pay for it. The youth takes that as an insult and throws the coin away. Dugan takes that as an insult and throws the meat away. Eventually the two will reconcile and join forces to recover a treasure located in a house that once belonged to the young man's prestigious family, now belonging to the new tyrannical governor, but this tense early encounter is the most dramatic moment of the story. It seems all the more dramatic now for the racial charge Friel infuses it with. His narrator -- the typical raconteur who claims to know Dugan but may be Dugan himself for all I know -- makes a point of emphasizing that the young man, Lorenzo, isn't the typical South American trash. "Not a thick Indian slur in his voice, not a word left out or misspoken; not the common lingo of the llanos," he says, "And his face was like his talk: sharp, clear-cut, with straight black brows and straightforward brown eyes and a firm nose and chin." And yet Lorenzo is an inferior, at least according to Dugan's own hierarchy of blood:

Well, that's the way Dugan's built. Sort of temperamental. Take him right, and he'll give you his shirt. Get him wrong, and that's different. And the Irish, if you don't happen to know it, have better reasons to get proud than anything that ever came out of Spain. A little matter of blood. There haven't been so many Africans in Ireland.


The sentiment is deplorable in an objective way and yet almost admirable, on Friel's part, for a frankness in viewpoint that too often goes missing today. In any event, the story doesn't treat Lorenzo like an inferior; it only insists that on almost all points someone from down there is going to be outclassed by an American, and an Irish-American especially. That goes double for Pompeyo, the de facto head of the goon squad that's attached itself to Lorenzo, hoping to snatch the treasure for themselves. He's "A cheap plug-ugly who'd tried to be a prize fighter in Havana, probably, but hadn't made good. But, down here, good enough to beat up all comers, till an Irish-American came along. The story itself is a punchy, hard-boiled entertaining affair, and if anything the casual bigotry enhances the overall tone. In the end, by the way, Lorenzo offers Dugan a whole bag of gold, but our hero deems himself satisfied with a single coin and some food, accepting what the young man originally offered him. Money doesn't mean much if you're more interested in moving on than in settling down, and Dugan has more adventures waiting for him.
Posted by Samuel Wilson at 7:10 PM