Variations on the good German 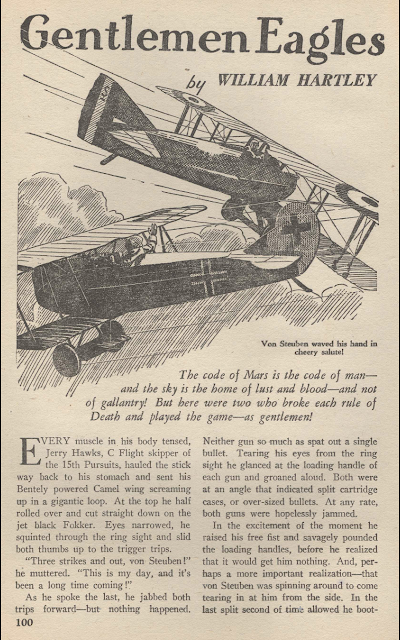 Let that be a lesson to me. In my last point I commented dismissively on Popular Publications' war-air pulp Dare-Devil Aces  based on a reading of approximately half of the January 1937 issue. Each story of the three I'd read featured stereotypical German villains and one-note gimmickry, leading me to deride the whole magazine as juvenile stuff. Having now finished the issue, I don't really think it much less juvenile, but I have to acknowledge it to be less monotonous in its overall content. Three of the remaining stories feature "Good German" characters, of which there were at least two sorts in this sort of pulp.  In C. M. Miller's "Eye of Doom" and the pseudonymous William Hartley's "Gentlemen Eagles" we get what might be called the sportsman, a relatively good-natured character who doesn't use the dirty "cold meat" tactics of more villainous Germans. In the Miller story the German isn't even the primary antagonist, but gets caught in the middle of a feud between two American airmen dating back to when all three were soldiers of fortune, more or less, in Latin America, the two Americans being on opposite sides of a civil war that cost the German a land investment. The suspense is twofold: will one American take vengeance on the other for having him flogged back then, or will the German take vengeance should his old American friend rat out his comrade as the one who cost the Kraut his plantation land? In the end there's no revenge and the German, even when taken prisoner, is just too good-natured to hold the one American's revolutionary antics against him. In "Gentlemen Eagles" the German is a chivalrous sport who withdraws from a dogfight when he sees that his American foe's machine gun has failed. The chagrined Yank bets his buddies that he can defeat this same ace within a certain time, and is forced to pursue the German to near the Swiss border in order to pick a fresh fight.This story is ultimately comic, the only one in the issue in which it can be said that no one really wins, unless you want to count it a win for both pilots that they're forced to land in Switzerland and taken prisoner for the duration, thus assured of surviving the war. It does count as a win for the American to an extent, since the German good-sportingly agrees to sign a statement confirming that the Yank brought him down at such-and-such a time so he can win his bet.

On a more serious if not mawkish note, O. B. Meyers' "Aces and Death" gives us a conscientious German, one more honorable than his commanders. This story invites us to see the American and German protagonists as near-exact counterparts, down to their similarly alliterative names, David Decker and Dagmar (isn't that a woman's name?) Denkert. The latter is forced down while on a bombing run against an Allied hospital housing a large number of German P.O.Ws. Denkert is shocked to learn that, contrary to German propaganda claiming that the Allies paint red crosses on ammo dumps, his target really was a hospital. He's naive enough to convince Decker to let him fly back to the German side so he can convince his superiors to stop bombing red crosses. When Denkert is predictably rebuffed and prevented from fulfilling his promise to return to the Allied side, Decker decides that he's just another treacherous Hun and is hot to shoot down his distinctive plane with a Z on the wing. Even after Denkert helps him escape after he's brought down behind enemy lines, Decker freaks out when the Z-plane appears to pursue him. The final twist comes after the American shoots that plane down, when a German plane drops off a message -- an omnipresent plot device in these stories -- explaining that Denkert's asshole commandant had used his plane to chase the American. As opposed to the more humorous stories with sportsman Germans, this one closes on a relatively grim note as Denkert reminds Decker that they'll be enemies once more should they meet again before the war ends. I still can't say I'm much impressed with Dare-Devil Aces, but I have to give credit where it's due for greater variety of content than I first assumed.
Posted by Samuel Wilson at 7:19 PM