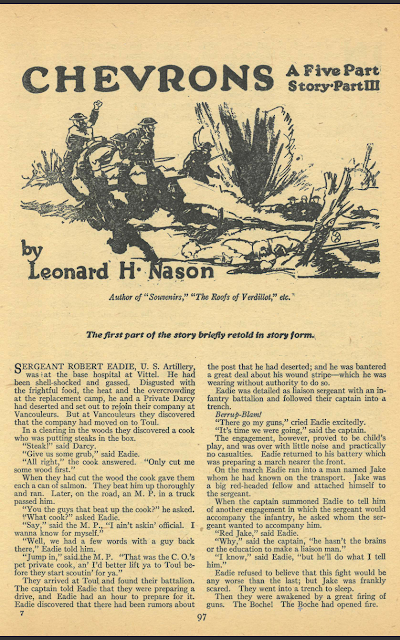 One of my rules for reading pulp magazines is to skip serial chapters, if I'm not going to see the complete story, unless they're first or last chapters. I've made an exception for the third installment of Leonard H. Nason's five-part war serial "Chevrons," from the September 8, 1926 issue of Adventure. I had a feeling that I'd be no more lost reading a middle chapter than I would be at any other point in the story, because being lost is pretty much the point of the whole thing. Nason may be the most underrated major writer in the Adventure stable. If so, that's probably because he dealt with the comparatively mundane subject of World War I, with the major exception of his 18th century picaresque serial The Bold Dragoon from 1925. Inspired by his own wartime experiences, Nason is above all a chronicler of the chaos of war. His stories typically deal with protagonists who get separated from their units and careen their way through battles bouncing off fellow soldiers in similar straits. Within the confines of Arthur Sullivant Hoffman's editing, Nason developed a hard-boiled style parallel to the detective writers at Black Mask, giving his characters angry, slangy dialogue that suits the hot-blooded cynicism of his stories and the uneducated eloquence of many of his soldier characters. Nason's war, retold less than a decade after the fact, is thoroughly deromanticized, as are its soldiers. His stories are episodic, virtually plotless apart from a protagonist's struggle for survival, so that part three of Chevrons is almost as artistically complete as any of his standalone stories, even if it leaves his protagonist Sgt. Eadie still in the thick of the action. On its own, the third installment is a coherent, convincing worm's-eye view of the war.

Call it cynicism or realism, but Nason is unafraid to show the American soldier in his ignorance, his selfishness, his sometimes cowardice and his often courageous resourcefulness. In this installment, Eadie, his sidekick Jake (responsible for our headline quote when confronted with a cartridge of Fumee Jaune) and an aggressive captain encounter "a half dozen gallant defenders of democracy who had huddled into a shell-hole and, having allowed the [German] advance to pass them, now began to timidly make their way out with every intention of breaking for the rear and safety." These draftees "don't see what good we can do by staying here and getting killed" after losing their officers, but the captain tells them, "You can stop a bullet from killing a better man!...This isn't the Russian army. You're a bunch of yellow ----." One of the draftees offers a characteristic response: "I'm not afraid of getting killed, but I am not going to be butchered. I'm no sheep; I'm an American citizen," and gets knocked "into a whimpering heap" for his trouble before the captain is killed by a falling shell.

"Where'd it getcha?" asked Jake earnestly.
"Never mind," said Eadie, "he's dead. I know by the way he feels."
Two or three infantrymen came cautiously over and watched Eadie fold the captain's hands and put his helmet over his face.
"What did he want to stand up like that for?" muttered one of them, "Can you tie that?"
"He wanted to show us he was braver'n us," replied another. "I tell yuh this place is a poor one to be brave in."
***
The man who had been knocked down by the captain now came over to the group.
"What outfit do you men belong to?" he asked.
"We're artillerymen," said Eadie, "from the Third Division."
"Oh!" cried the other. "The ---- regular Army! They shove us in here to crack the hardest nut in the whole sector just because we're men that can earn our living on the outside. These are the guys that want to shove us up against some more machine guns"
Jake was about to reply, but Eadie waved his hand to him to be silent.
"We don't give a ---- whether you go or stay," said the sergeant, "There's a barrage of military police in back of you that a rat couldn't get through. And if they get their hooks on you you'll wish you'd been killed up here. This isn't my first scrap. I know what I'm talking about. I wasn't shoved into the Army with a bayonet, nor shoved on to the front lines with another one. If you were any kind of man I'd lick you for what you said about the regulars, but as it is I'll give you a good kick if you open your mouth again. If it hadn't been for us you'd be wading around the Atlantic Ocean now to save yourself from being a Boche prisoner."
"Huh!" grunted the other sarcastically.


After the draftees head for the rear, Eadie observes, "There's a hero for you. He'll go home and be president of the Society of Veterans of the American Excavationary Forces yet. He's just the kind of a bird to shine in public life." But Jake answers, "I don't know but what he's right. We won't do no good to get killed. This outfit has run itself down like a kettled steer." And they still have stubborn, stupid or insane officers yet to encounter in this installment. I can't help wondering how the passage above went over with editor Hoffman, an early promoter of veterans' organizations like the American Legion, but the fact that counts is that he gave Nason his start in fiction and made Adventure his home base  -- he also appeared regularly in The Saturday Evening Post -- as long as he published in pulp. I find these conflicts within the conflict fascinating, along with Nason's inventively episodic approach to the war in general. His stuff is a highlight of any issue it appears in.
Posted by Samuel Wilson at 7:34 PM