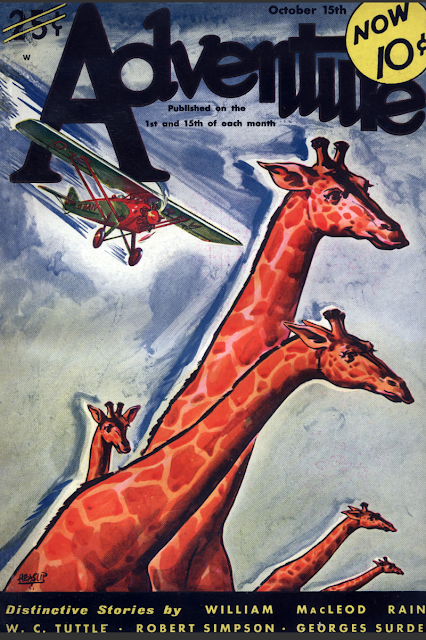 With the September 1, 1932 issue the once-mighty Adventure shrunk to half its former size, from 192 to 96 pages, while cutting its issue price by more than half, from a quarter to a dime. Considering that Argosy gave you 144 pages every single week for the same price, you wonder whether Adventure readers felt they were getting their money's worth. A casual reader probably was most disappointed, since in this particular issue, nearly a third of the content, 29 pages, went to serials. Gone was the traditional lead novel that in Adventure's golden age might have run for 60 or 70 pages. The longest standalone story in this issue is Robert Simpson's "The Crown on Crocodile Island," a mere 15 pages in length. This African story develops an interesting situation and is actually informative about the labor obligations imposed on tribal chiefs and the efforts made to evade them, but the climax is perfunctory and underwhelming, leaving you feeling there should have been more to it. 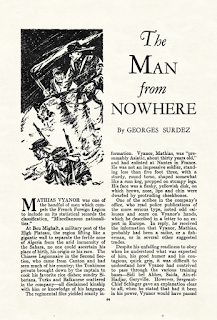 This number actually has two of my favorite pulp writers in it. Georges Surdez contributes "The Man From Nowhere," about a Foreign Legionnaire who can barely speak French and whose native tongue is known to none in the Legion's cosmopolitan ranks. It's basically a gimmick story that gives Surdez a chance to show off a different landscape from the norm by sending the Legion into the snowy mountains of North Africa. See the recent French film Of Gods and Men for a visual reference. The gimmick is that the mystery Legionnaire turns out to be an Inuit from Greenland who'd been brought to Europe by an explorer and gotten lost. By Surdez standards, a trifle. Robert Carse's "The Long Night" is a typical contest of wills aboard an aged windjammer between a young captain and a veteran mate, with the typical conclusion of belated mutual respect and teamwork in a crisis. There's nothing special about the story but Carse has a knack for infusing tales like these with a surly energy that makes them entertaining. 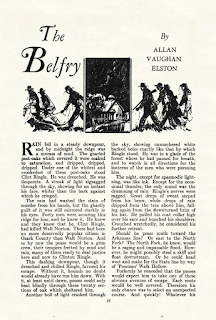 The best story this issue is Allan Vaughan Elston's "The Belfry," about a fugitive killer who nearly outwits an entire town of pursuers. The ingenious criminal hides in a tree as the posse passes him by, then follows discreetly behind them, walking in their footprints. In like manner he makes his way back into town and holes up in the church belfry, figuring that after a few days of fruitless searching the posse will finally give up so he can sneak out for good. This story works well as a thriller, establishing the danger our criminal protagonist faces at every moment, when the slightest wrong move can set the church bell ringing and give him away. It's the hallmark of a good thriller that you can't help sympathizing with if not rooting for the killer, even as you try to guess how he'll screw up in the end. The ending proves somewhat anticlimactic but Elston shows some real talent here.

Along with the serials by W. C. Tuttle and William McLeod Raine, there's T. R. Ellis's "Fences," about a rodeo rider turned auto racer, and two non-fiction pieces, including a good one from Carl Elmo Freeman that's part of a series on firearms history. The Camp-Fire letters column is a mere four pages, though that's still more than you'd see anywhere but in a science-fiction mag. Overall, Adventure in this period can't help looking and reading like a shadow of its former self. It'd put some more meat on its bones in 1933, going up to 128 pages, but it sacrificed frequency to do it, going from semi-monthly to monthly. The page count would fluctuate thereafter from a World War II peak of 160 pages a month to 112 pages every two months toward the end of its life as a pulp magazine. In short, better days were still to come for what had arguably been the greatest of pulps.
Posted by Samuel Wilson at 7:20 PM