'Your hoodlums split the scalp of a prettier girl than you to keep her quiet. Taught me how!' 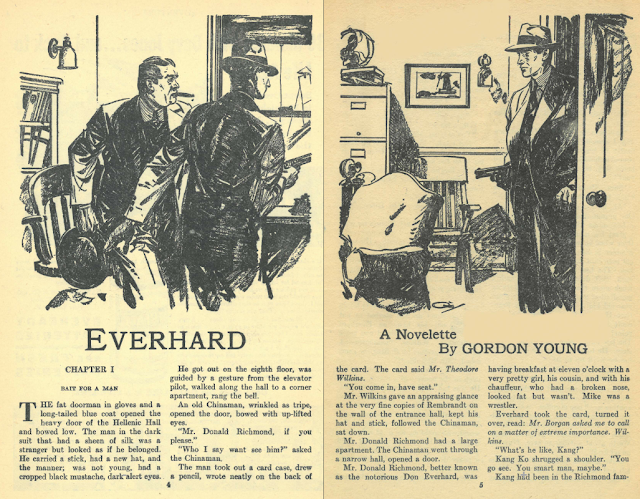 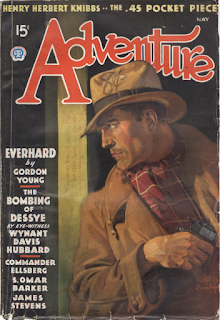 Created in 1917 for Adventure by Gordon Young, Don Everhard is recognized by some as fiction's first hard-boiled detective. That recognition is based on substance rather than style. Everhard, aka Donald Richmond, an oil-rich gambler and sometimes troubleshooter, has a grim, somewhat cynical attitude, but Young as a writer, especially early on, lacks the terse, staccato manner of the more generally recognized hard-boiled pioneers writing for Black Mask. Over time, their influence sunk in, so that by 1936 Young could talk the talk as well as walk the walk. The title "Everhard" (Adventure, May 1936) suggests that his novelette was meant as a kind of "reboot" for the character, and not necessarily the first since he, or his editor, had already given a 1933 novelette the same name. There had only been one Everhard story in between, the 1936 "Everhard" being the first in more than two years. He'd been mostly writing sea stories and westerns in the interval and presumably refining his style. The 1936 story re-establishes the hero's household: his sister Helen; his servant Kang Ko, a disciplinarian of long standing; and his chauffeur Mike, a professional wrestler who himself can talk the talk, cutting a mean promo to distract people while his boss does some sneaking, as well as walk the walk by breaking a crook's neck. Everhard himself is drawn to the aid of casino operators threatened by the unexpected release from prison of "Killer" Lynn, who has vowed vengeance on both the casino owner and Everhard himself. It develops that the threat to the casino is meant to draw Everhard out so Lynn and his mysterious employer Rinsko can eliminate him. It then develops, in an entertaining extra complication, that Everhard is being used as bait to draw out Lynn and Rinsko by a G-Man and his fanatical girlfriend, who fools Everhard so completely that he suspects her of setting him up for the gangsters to kill. That element of fallibility, the extent to which his own wrath at the gangsters leads him to blunder severely, makes Everhard a much more interesting and (dare I say?) likeable character than he was in previous stories I tried to read. In short, the 1936 "Everhard" read like a very promising restart for the franchise, but Young apparently was running out of ideas for his detective. Don Everhard only made two more appearances, in the November 1937 Adventure and in his only foray outside his home pulp, in a 1939 issue of Short Stories.  His heart may not have been in the genre anymore; he may have preferred writing, and fans may have preferred reading the exploits of his cowboy hero Red Clark, which continued for much of the 1940s, until Young's death in 1948. If anyone has read anymore Everhards worth recommending, I'll be glad to hear about them.
Posted by Samuel Wilson at 6:01 PM