'It's a yellow way to get out of a hole, Gatlin -- abandoning a white man in this country." 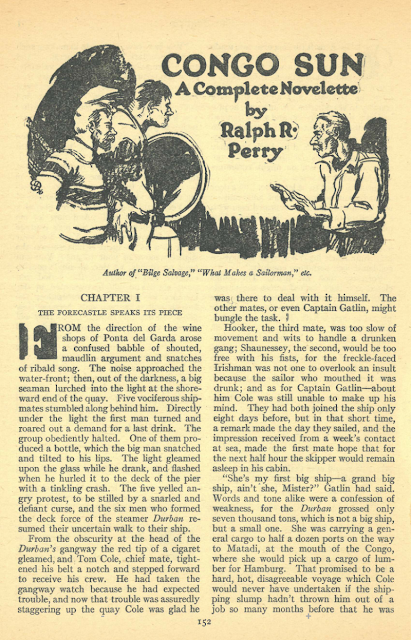 A common theme makes Ralph R. Perry's "Congo Sun" and W. Townend's "Red" appropriate bookends for the September 8, 1926 issue of Adventure. Both stories quite consciously attack the anarchically egalitarian attitude that "no one's any better than I am." In the Townend story, as regular readers will recall, a merchant-marine communist discovers his own superiority to the trash of proletarian London and emerges as a leader of men. In Perry's a frustrated first mate struggles to break the resistance of a crew of trash against an erratic captain. There's really a threeway struggle among First Mate Tom Cole, the hero, Captain Gatlin, who careens between cowardly indulgence of a malcontent crew and irrational rage against them, and Seaman Sutson, self-appointed ringleader of a bad crew of deckhands. Cole understands that someone like Sutson has to be brought to heel as soon as possible, but Gatlin fears the harm to his record should violence have to be employed against the crew. Cole doesn't necessarily think violence is the only solution, but while force may not be the only thing Sutson understands, forcefulness in manner may be the only other thing. As the ship heads up the Congo to pick up loads of lumber the equatorial heat gets to everybody and Gatlin grows increasingly intolerant of Sutson's goldbricking ways while Cole worries that it's too late to tame Sutson without violence. A sunstruck Gatlin has an alternative, which is to abandon Sutson and his buddies in a jungle town where they've been drinking the latest advance on their salaries extorted from the captain. While Cole feels that Sutson deserves such a fate, it still seems wrong to him somehow, and when Gatlin finally collapses from exhaustion, our hero uses his temporary authority to finally force the issue with the defiant seaman.

This isn't the sort of adventure thriller that Perry would write later in his Bellow Bill Williams series for Argosy. Instead, it's a character study of the shifting moods of mate and captain amid gradually increasing suspense as Perry delays the inevitable hand-to-hand showdown between Cole and Sutson. When that finally comes, Perry makes the blowoff surprising brief but unsurprisingly brutal. It works somehow; Cole breaking Sutson's arm is more abruptly decisive than the pages of knock-down and drag-out another writer might attempt. Despite the title, Perry has little to say about Africa or Africans, apart from noting, despite his characters' free use of the n-word, that native krooboys are more dependable workers than white trash like Sutson. In "Congo Sun" and "Red," pulp fiction seems to be preparing readers not only to pass the expected tests of courage and responsibility, but to take authority over others and prove that not everyone is as good as they are. Another way of putting it is that pulp, at least as published by Adventure editor Arthur Sullivant Hoffman, favors meritocracy over egalitarianism, or prefers a meritocratic egalitarianism that rewards talent and character regardless of class (see "Red") over an egalitarianism that stubbornly rejects all meritocratic distinctions. To look at it yet another way, modern critics may focus on how pulp affirms racial hierarchies, but pulp stories often require stiff-necked whites to bow before heroic characters as well, sometimes after struggles nearly as difficult as any empire's civilizing mission.
Posted by Samuel Wilson at 8:42 PM