'This probably was the last time he'd pick up something Trump brought him.' 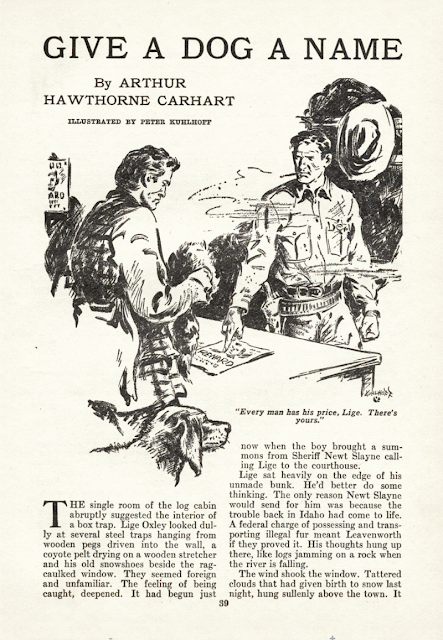 Arthur Hawthorne Carhart's "Give a Dog a Name" (Adventure, June 1943) is a cute mystery story in which a heroic dog discovers the crucial clue. Carhart, a western specialist, wrote something short and to the point. The hero, Lige, is reluctantly conscripted to hunt down a friend accused of murdering another man. The law has leverage over him because Lige is wanted in another territory. The authorities expect Lige's dog, himself a sort of outcast, to be able to sniff out the suspected man. The twist is that the dog leads Lige to the alleged victim, who had faked his death, making it look like his bloody body had been dragged to the rapids, in order to get away with robbery. The crucial clue is the victim/culprit's bloodstained shoe, which indicates that the shoe's owner had to have taken it off after he'd supposedly been killed. Good dog! The thing that makes this story worth a post to me, or at least worth some clickbait, is that the dog's named Trump. I could have used a lot of sentences to headline this post. For instance:

Trump was an ugly dog. Everyone thought so, except Lige.

Trump was about to be shot the day they met some years ago. The shepherd had seen Trump smelling a coyote-killed lamb. He believed Trump guilty.

Trump must have realized he'd been pulled out of a bad spot.

The citizens wouldn't care what became of Trump. He'd probably haunt back doors, scavenging food, until someone shot him or poisoned him and felt righteous doing it.

There was one way to do it. Kill Trump and then let Newt Slayne send a telegram to the law man up north.

Maybe if he could understand, Trump would rather have this happen than to have Syd caught.

Trump came back when called but then struck out in that wrong direction again.

[Or, if you really want to editorialize...]

"Don't try," said Lige, "From here on we both follow Trump."

This is all very sophomoric in what I hope is nonpartisan fashion, but I couldn't help myself. If anyone takes offense, I swear that if I find a jungle story featuring any sort of savage named Obama, I'll do the same thing.
Posted by Samuel Wilson at 6:17 PM