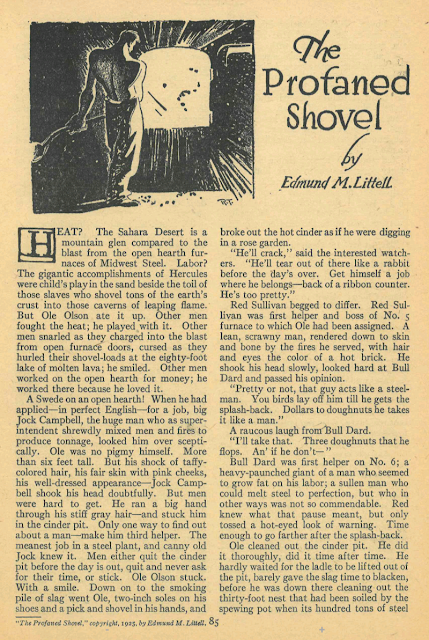 Pulp fiction often invited readers to ask, "could you take it?" That was the subject (or subtext) of stories comparable to today's tough-job genre of realty TV. The idea wasn't to question working conditions, but to aspire to coping with any circumstance. Edmund M. Littell's "The Profaned Shovel" (Adventure, January 30, 1926) is a case in point. Littell's hero, Ole Olson, is too good to be true. "Other men fought the heat" of the steel furnace, "but he played with it....Other men worked on the open hearth for money; he worked there because he loved it." Why he loves it so never quite becomes clear. Ole is an educated young man -- he speaks perfect English instead of the standard "yumpin' yimminy" dialect and is self-taught on the theory and practice of the industry -- yet he gladly becomes "a slave to the gigantic lamp of steel." But there's a serpent in his hellish paradise: Bull Dard, "a sullen man who could melt steel to perfection, but who in other ways was not so commendable." Bull makes a habit of hazing newcomers and makes a special case of Ole, perhaps because he's too handsome, too smart, too clean to be down among creatures like himself. "He's a purty boy, but he hurt his tummy," Bull sneers after Ole has a baptism of fire charging ferro. The novice inevitably gets his belly singed by molten splash-back, but while many quit after such an ordeal, in Ole's case "the test of the splash-back had uncovered a scar-bellied steel-man!" Bull's way of congratulating him is to slap him in the belly. Everyone lets Bull get away with his crap because he's too good a steel-man to lose. Complacent Ole simply has to go through a rite of passage that will climax when he finally stands up to the bully. Until then, his refusal to take offense only offends Bull more. The final straw finally breaks when Bull snaps the custom-carved handle of Ole's precious shovel. The narrator has explained that "to the man who lives with a shovel in his hand that tool must become an integral part of him.... Clothes might be burned, hide might be blistered, but an open hearth man's shovel must be guarded as precious." Bull breaking his shovel is all Ole can stand, he can't stands no more! The climactic fight, fist against fist, shovel against shovel, takes most of a double-column page, and with a big Swede fighting the mill bully, the outcome never was in doubt. Ole is eerily magnanimous in victory, to such a degree that a chastened Bull tries to quit his job, only to be dissuaded by his former foe, now his buddy. Their reconciliation is a practically orgasmic moment for all the workers: "A long sigh escaped from the tensely listening crowd, as though a blast of air had suddenly been released from the mighty blowers beneath them, a sigh more significant than the thundering applause of a cheering multitude," Littell writes.

"Shovel" was Littell's debut in Adventure and his first pulp story. That required him to introduce himself to "Camp-Fire" letter-column readers. "There, sir, is romance far too great for my poor effort," he says of the steel industry. The casual observer "does not see the gigantic work that goes on amid those man-made hells; the thousands of men who labor prosaically in the most spectacular surroundings ever devised by man. These men live and die as others. Their emotions may be dulled by fatigue, or blistered raw by the fires they serve, but they are all of the same stuff as the man who rides the cushioned steel Pullman on the rails they have made." He admits to some trepidation about submitting "Shovel," because of the industrial setting's "remoteness from the atmosphere which [Adventure's] stories generally depict....Certainly it is anything but one of the world's open spaces. But the courage of men is there, none the less." Littell needn't have worried. Given the steel-men's working conditions, the setting may have been more exotic or lurid than prosaic for pulp readers, but in the end, the superficial details aside, Littell told a story that could have been told in many different workplace settings, and probably had been already.
Posted by Samuel Wilson at 7:17 PM