'I ain't havin' no ginger-haired she-catamaran poachin' around here, savvy?' 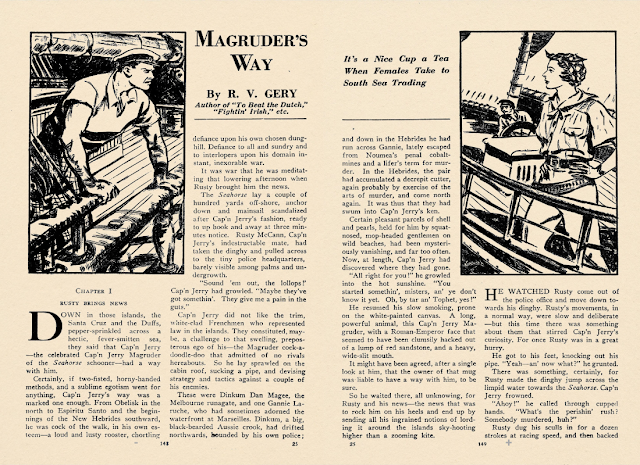 R. V. Gery was a British Navy veteran and ex-convict -- he did six months for fraud -- who settled in Canada and got into the pulp business. He started out as an Adventure regular but by the mid-1930s Short Stories had become his main market. "Magruder's Way" (November 25, 1937) is a title that tells only half the story, which is as much concerned with Red Heron's way as Jerry Magruder's. They're rival traders in the South Pacific, Magruder the established veteran, Heron the upstart interloper and a woman to boot. She's "poaching" on Magruder's normal trade with island natives and he doesn't like it. He expresses his disapproval in typical pulp male manner, warning her that "it'll be a spanked sit-upon for you -- and a single ticket to Sydney" when he catches up with her, "Go on down there an' get yourself marries. That's the lay for you!" Red Heron is a badass, however, and even more of a badass is her mate, the loyal but unscrupulous cockney Henry Jevons. The novelette evolves into a three-way battle as two villains, murderers and more literal poachers, an Australian and a Frenchman, make their play for anybody's boat. Magruder constantly underestimates Heron's ability to deal with this threat, perhaps because he sees how the stakes for her are higher than they would be for him.

Rusty [Magruder's mate] nodded again, sagely. 'They'll knock her off,' he observed. 'Sure's eggs!'
'Knock her off!' Cap'n Jerry almost groaned. Rusty's imagination was never his strong point. 'Ain't you been brought up to know the facts o' life, ye big ox? If t'was only that -- An' here, too, right smack-dab in the middle of my islands. Man alive, shut your eyes an' think for a minute -- if ye can thing -- what that couple'll do with her. Judas Priest!'
Obediently, Rusty closed his eyes, but when he opened them it was not with any lurid envisagement.
'It ain't any business o'yourn,' he said. 'Thought ye didn't like her.'
Cap'n Jerry drew a long breath and expanded it to the bottom of his lungs in a torrent of abuse that once again beat anything even Rusty had ever listened to.
'Like her!' he yelled finally. 'Why, ye blitherein' ape, what's that got to do with it? Like her? My soul an' body, I wish she was in everlastin' blazes this minute an' stying there. But that ain't it, ye lummox. She's here -- an' if them swine get a her, there'll be somethin' happen that'll give us all a black eye hereabouts for good. Give me a black eye, by Joseph, all up an' down the islands, just for lettin' it happen.


Magruder isn't wrong about the Frenchman's intentions, but so singleminded is he in his determination to defend Red Heron's virtue that he ends up inadvertently sacrificing his own boat to the bad guys, while Red ends up taking him prisoner on her own ship. She then proves herself a super sailor by giving chase to the villains in the teeth of a storm. Magruder finally joining her at the wheel as the captains discover common interests. She's ready to overtake the enemy and seize Magruder's abandoned ship for salvage, with Cap'n Jerry locked in a cabin, when Jerry recalls that the outsailed killers have an equalizer on board: Magruder's cargo of explosives. Gery moves smoothly into thriller mode as Heron closes in on her quarry, the Frenchman prepares to toss a bomb at her ship, and Magruder pounds hopelessly on the door to warn her. Finally he bursts through the skylight to save the day by literally batting the bomb away with his hand at almost the last moment. There's nothing like that to bring two people closer together, and the tale ends with thoughts of spankings mostly forgotten. It's an unpretentious, entertaining story, predictably heavy on accents but in a way fitting the overall lighthearted tone. I couldn't tell from the FictionMags Index whether Gery made a series of Magruder and Heron, but they struck me as characters worthy of an encore appearance.
Posted by Samuel Wilson at 3:25 PM