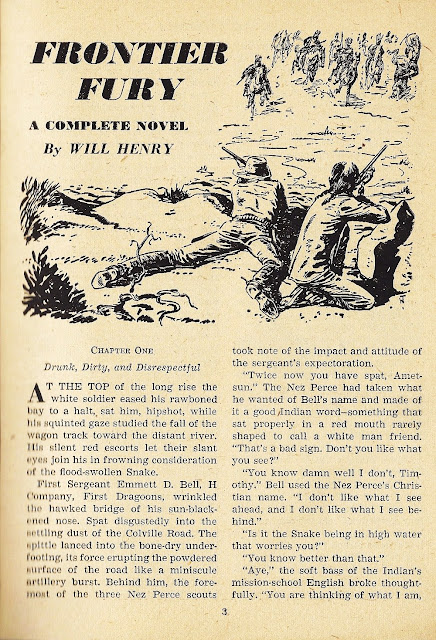 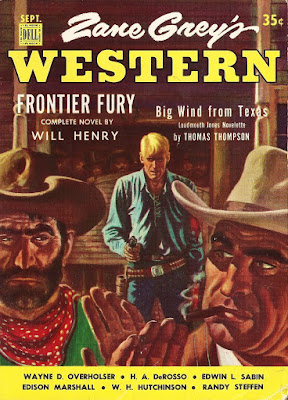 Last weekend while clearing some of my DVR queue I watched the 1956 George Marshall film Pillars of the Sky, a western vehicle for Jeff Chandler. When Sam Rolfe got a writing credit for adapting Will Henry's story "Frontier Fury," I said to myself, "I have that one!" In fact, I have it in its original form as an 82-page "complete novel" in the September 1952 issue of Zane Grey's Western Magazine. Published by Dell for approximately seven years (Nov/Dec 1946 to January 1954, mostly monthly), Zane Grey's was the most successful attempt at a western magazine in the digest format that would supplant the traditional pulp magazine. Originally highlighting abridged reprints of Grey's novels, the magazine increasingly highlighted original works by current writers from late 1950 forward. Henry W. Allen, formerly a story man for cartoon auteur Tex Avery, published most of his magazine fiction there under the pseudonyms "Will Henry" and "Clay Fisher." Editor Don Ward noted that "Frontier Fury" would soon appear in expanded form as a novel. It did so as To Follow the Flag, which makes it curious that Pillars of the Sky cites "Frontier Fury" as its source. Maybe Universal could pay Henry less, if anything, that way. I couldn't help wondering how the novel differed from the magazine piece, since the film bears only a minimal resemblance to the original.

"Frontier Fury" is based on an 1858 battle in the Pacific Northwest in which the U.S. Calvary took a beating, and it's mostly a battle narrative focusing on Sgt. Emmett Bell (aka "Ametsun") and his Nez Perce scouts. They manage to help the commanding colonel avoid a complete massacre, and it's clear from the close that the war with the Palouse, their chief Kamiak and his allies will continue. Meanwhile, Emmett gets the girl who had once been engaged to another officer who gets killed during he battle. Improbably for 1956, one of the changes made for Pillars of the Sky is that Emmet does not get the girl, there played by the late Dorothy Malone. Instead, Cally realizes that the other officer, who survives the film, cares more about her than Emmet does. Emmet apparently has a higher calling. Pillars portrays the 1858 war as virtually a war of religion. As in "Frontier Fury," most of the Indians are Christianized, use Christian names and speak fluent English, the exception being our villain Kamiakin (Michael Ansara), who signifies his disdain for the white man's religion by keeping his original name. Pillars makes a major character out of Protestant missionary (Ward Bond) who is only mentioned but never seen in "Frontier Fury." In the film's climax, Kamiakin kills the missionary in cold blood, only to be killed by the Christian Indians, thus presumably ending the war. In the end, it looks like Emmet will take the missionary's place, leading the Indians in prayer in the ruins of the mission. Where the hell did that come from? Not from To Follow the Flag, I suspect.

If anything, the title of the novel suggests that its focus is even more strongly on the Nez Perce scouts than in "Frontier Fury." For Timothy, the chief scout, following the flag is a point of honor. His character reminded me a lot of the Apache scout in Ulzana's Raid whose loyalty to the cavalry is unswerving because he "signed the paper committing him to its service. It goes deeper than that for Timothy, though he finds himself constantly distrusted by the cavalry officers. He's been obsessed with the American colors since his childhood. As he explains to Emmett, comparing his loyalty and idealism to the other scouts:

When they look on that gay banner of the Pony Soldiers they don't see what I do.They have no eyes for that bright cloth on its roundtopped lance-haft. They can't feel the blood and the snow of its stripes. They can't touch the deep blue of its sky nor reach the bright glitter of its stars. Well, wuska, let that be the end of it. If they can't see the flag, how can they follow it?
But I can see it. I have always seen it. From the day the old chief, Menitoose, my father who walked with Lewis and Clark, drew its design and color upon my first boyhood shield, I have seen it. The old man bade me take the emblem and walk behind it with his image in my eyes for all the days of my life. I have done that bidding. Where that flag goes, Tamason [his real name] will follow it.


By comparison, Emmett is something of a cynic, though more trusting of Timothy as a matter of personality and experience than his superiors are. While he's convinced of Timothy's integrity, he also suspects that the Nez Perce are acting on tribal self-interest first and foremost, concerned mainly with weakening their native enemies with American help. He's also "an Indian veneer-peeler of five years' good standing" who doubts how deeply Christianity has changed the natives. He makes a running joke of Timothy's devotion to Choosuklee, aka Jesus Christ, which good-natured Timothy takes in stride. All this makes Emmett's arc in Pillars of the Sky more strange, but one thing the film admirably preserves from "Frontier Fury" is Henry's overall eschewal of the stilted dialogue that passes for Indians speaking English fluently in many westerns. The flowery excerpt above notwithstanding, Timothy and the other scouts, Jason and Lucas, speak more casually than western readers and viewers may have been used to, and often with an actual sense of humor. Alas, Henry abruptly throws away any good will he might earn from the "politically correct" modern reader by giving Cally a black servant who speaks minstrel dialect and is described with both the n-word and the d-word by our hero! Emmet is grimly amused by the role reversal when an Indian captures the women and takes the black woman as a wife, making Cally his new wife's servant, but modern readers may not laugh with him. Wisely, the servant doesn't appear in Pillars.

In "Frontier Fury" it's Timothy, not Emmett, who gets the last word. His double ordeal, scrambling to survive and making heroic efforts despite the distrust of most officers, has embittered him in a way he won't express to his friend Ametsun. But he makes his feelings clear to his own sidekicks on the final page of the story.

It's a fool's flag, my brothers, and those who follow it with them [the white soldiers] are fools.The red you see upon it is Indian blood. The blue is the empty sky they trade for our lands. Those white stars are their promises, high as the heavens, bright as moonlight, cold and empty as the belly of a dead fish.


Lucas and Jason, never idealists and never disillusioned, see things more practically. "My belly, too, is cold and empty as a dead fish's," one says, "And the food is there. Where the flag is." Once the motion is seconded, Timothy wistfully acquiesces with the words above this post. Overwritten as it sometimes is, and in spite of its uglier moments, "Frontier Fury" is a better western story that Pillars of the Sky, okay on its own terms, is a western movie.

Posted by Samuel Wilson at 4:48 PM