'He had an ambition at last; a passionate desire to bring about a desired result' 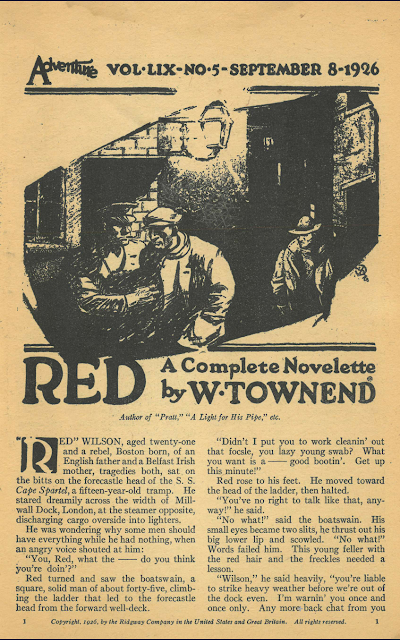 W. Townend's "Red" (Adventure, September 8, 1926) plays out like one of those "night from hell" movies crossed with a Horatio Alger story. The Alger side of it is the way our poor protagonist, named "Red" for his hair, earns an opportunity for success through an act of personal heroism. The After Hours aspect is the satiric sequence of nasty, brutish encounters Red, also named for his communist beliefs, experiences on his way to a naive rendezvous before his heroic opportunity. Red Wilson's a sailor who's lost his berth after getting into a fight with a crewmember, sick and tired of taking orders from people when, as far as he's concerned, no one's better than anyone else. With a comic-relief Scotsman as his sometime sidekick, Red embarks on a series of misadventures taking him to the Isle of Dogs, one of London's most squalid neighborhoods. Townend's idea seems to be to destroy Red's idealism about the working class, if that's an accurate label for the ensemble of criminal scum he encounters on his fool's mission to find Alf Coley, a supposed good comrade recommended to him by a man whose laughter signals to readers that he's having a great joke at Red's expense. Coley proves to be the most despicable of all, a would-be kidnapper and rapist who beats up Red and becomes the object of our hero's vengeful ambition. For what he tells himself are perfectly selfish reasons, he tracks Coley to where the thug plans to lure a millionaire into a shakedown with an ailing (drug-addicted?) son as bait. The situation becomes more severe when the millionaire's pretty daughter shows up at Coley's lair instead. The predictable melodramatics ensue, after which we get to the real meat of the story, when the millionaire and Red debate the state of society. By this point Red has shown the reader many heroic qualities, and Townend has emphasized that, unlike the enduring stereotype of the leftist, his protagonist is not motivated by envy of anyone. He doesn't want any reward from the millionaire, so he gets a straight talk instead. Presumably Townend's mouthpiece, the millionaire echoes the point the narrator hinted at earlier about the importance of ambition. Admirably, neither millionaire nor author tries to idealize capitalist society; they come instead from the "life's not fair" school, though the millionaire is not so snide about this as many are today.

The world's in a bad state, no doubt. It always has been, and while you get men like your friend, Coley, it always will be. Even though you eradicate the abuses we all know of, abuses many of us are trying to eradicate in different ways from the ways you recommend,you'll always have human nature to contend with. Your friends in Russia [i.e. the Bolsheviks] have proved that you can't change things wholesale, only, I suppose, Mr. Wilson,you wouldn't regard it in that way, quite, would you?...The world's a hard old place but there's good to be found in it, if you know where to look.


By the end, having taken the millionaire ship-owner's offer of a berth as a bosun, Red has changed for good, in either sense of the word, by giving up egalitarian idea that no one's better than anyone else. He learned during his night from hell that he was better than plenty of people. "Life was tough, more tough than it need have been," Red reflects, "if men and women would only think less of themselves now and again and more about other people." Ambition does not mean robbing or thrashing everyone around you, as so many he'd met had tried to do, but it does mean asserting yourself when you actually know better than someone else. Facing one of his old antagonists aboard his new ship, he tells the man, "You're not as good as any one else aboard this ship and you needn't think it. You're not as good as me to begin with....You may be as Red as you like ashore, but aboard this ship you'll remember you're one of the hands and you'll do as you're told." There's no denying that "Red" is a conservative work of fiction that stacks the deck by populating Red's path with so many scumbags, but at the same time it struck me as a more nuanced portrait of a left-winger, however misguided Townend takes him to be, than one might have expected from pulp fiction of this period.
Posted by Samuel Wilson at 7:28 PM