'The main streets of London were, to Rodgers, as black as the chasms of the Taurus mountains. '

The outbreak of World War II took Paul Rodgers, the Red Wolf of Arabia in William J. Makin's long-running Blue Book series , away from his usual Middle Eastern haunts, at least initially. "London Blackout" (March 1940) takes Rodgers from the Mediterranean to the English metropolis in pursuit of the spies providing ship locations to German U-boats. Infiltrating a treacherous Greek vessel disguised as an Arab stowaway, he finds that the Nazis are using tricks out of the old pulp playbook. The spies transmit information through commercial radio broadcasts, embedding the crucial data in Spanish-language commercials. Once he figures this out, the Red Wolf sics the British navy on a German sub before abandoning the ship where he's been pressed into menial labor. From there it's on to London, where he tracks the Greek captain to spy headquarters. Rodgers uses a classic bluff to save himself and the Greek from the Nazis. Confronting them alone to save the captain from an abrupt execution, he brazenly announces that he has reinforcements right behind him. In fact, he has guaranteed reinforcements by stopping upstairs earlier and turning on all the lights in violation of the city 's blackout policy, assuring the place of a police visit. If only the whole war could be won so easily, but alas, Makin himself would not survive the conflict. 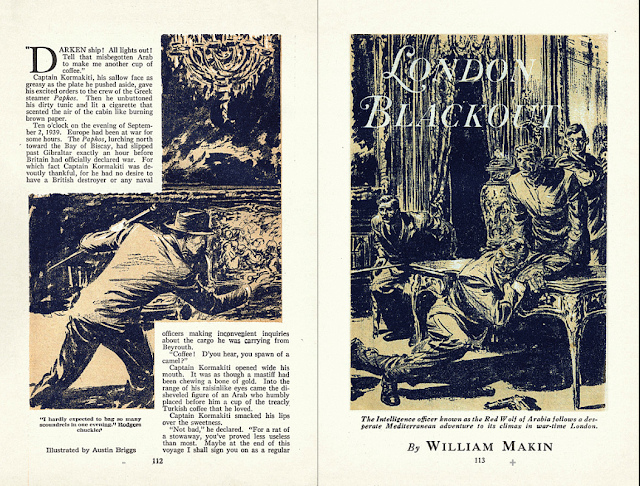 Posted by Samuel Wilson at 5:04 AM