'When the bird flies away -- when the monkey drinks.' 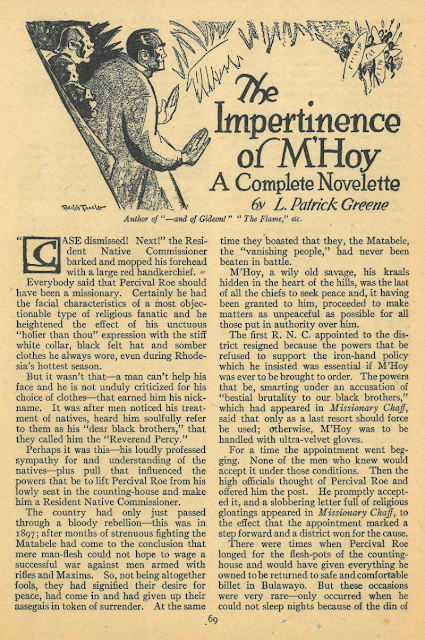 L. Patrick Greene returns to Africa with "The Impertinence of M'Hoy," (January 30, 1926), one of his weaker contributions to Adventure. The problem with this one, I think, is that Greene is trying to tell two stories at once: one about the attempted uprising of the titular Matabele chieftain, the other about the pig-headed naivete of Resident Native Commissioner Percival "Reverend Percy" Roe. The latter's offense seems to be that he doesn't understand that the only thing some Africans understand is force. He's not exactly an anti-imperialist; Roe never questions Britain's right to colonize Africa, and he rather enjoys the flattery he receives from wily rogues like M'Hoy. But he shares with today's stereotypical "bleeding heart" anti-imperialist a belief in the essential innocence of his "dear black brothers," and that puts him at odds with the real hero of the story, Trooper Beamish, whom Roe presumes to be a racist ("You are the sort of man who refers to natives as niggers and has nothing but contemptuous hate for our black fellow subjects") because he doesn't trust M'Hoy's intentions and conducted a forcible search of the chief's kraal. Beamish is not the sort of dirty-mouthed racist Roe imagines; he gets on quite well with his own well-disciplined black troops, who share his contempt for Roe, -- he halfheartedly reminds them that the RNC it "the voice of the Great Queen," and is told, "He is her voidance of wind, more like," -- and his hunch about M'Hoy is quite correct. The action of the story is his labored effort to make Roe see the light of M'Hoy's darkness. His plan requires his own men to swallow their pride and accept the insults of M'Hoy's people. They balk at the idea until he explains to his corporal, "Have you ever seen a bird play lame in order to lure a snake away from her nest? Have you never seen a crocodile float like a rotten log on the top of the water until a foolish monkey approached to drink?" It's a fairly common trope of imperialist pulp that natives can defer gratification once convinced that doing so is part of a game or contest, and so thinking Beamish's men are willing to go along with his scheme until the time "when the bird flies away -- when the monkey drinks." The payoff is underwhelming: Beamish finally goads M'Hoy into attacking him and his men at a time when Roe is visiting his camp and will see the Matabele's illegal weapons, at a time when M'Hoy knows that Roe is nearby. This seems stupid after we've seen M'Hoy boast to Beamish that he'd always be able to convince "the fat white man" of his innocence. In fact, M'Hoy has conveniently explained all of his plans to Beamish, assuming (as villains will) that our hero won't be able to do anything about it. But Beamish hardly has to do anything so long as M'Hoy acts so quickly, and on such feeble pretext, to undermine his own strategy. It hardly matters, since the only point of the story is to wise up some fool about native wickedness, yet the story ends on a cynical, pessimistic note. Beamish believes that "Roe has had a little sense knocked into him" by his experience, but Beamish's superior is doubtful. as Greene writes, "He knew the breed."
Posted by Samuel Wilson at 8:39 PM