'The Peloroxo cursed softly after the manner of the gringos, yet with a note of extraorinary cheefulness in his voice.' 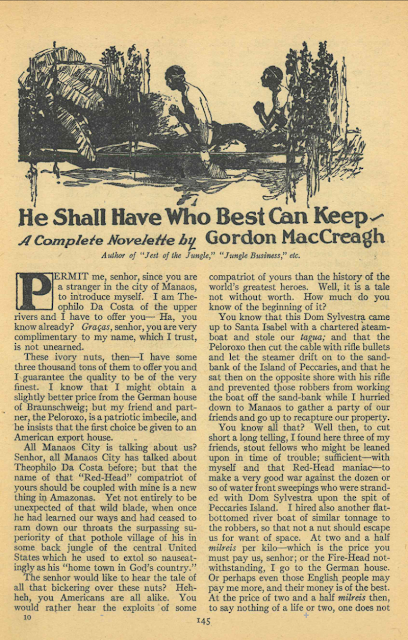 I think of Gordon MacCreagh as a writer of African stories on the strength of his Kingi Bwana series and the Ethiopian safari he conducted for Adventure. But "He Shall Have Who Best Can Keep" (January 10, 1926) finds MacCreagh close to Arthur O. Friel country, in Brazil, telling a story in Friel style, from the viewpoint of a native observer. Theophilo Da Costa, or "Theophilo of the upper rivers," is a legendary trader and fighting man, but the real protagonist of his story is his red-haired American protege, nicknamed "the Peloroxo"or "Fire-Head." Their adventure fighting river pirates to recover a valuable shipment of tagua (i.e. ivory-nut palm) is entertaining in its own right, but almost a Macguffin relative to the generational tale MacCreagh wants to tell about America. The adventure happens while Peloroxo's father, Mr. Featherstone, is visiting in hopes of bringing his son home to take his rightful place in the family business. The old man is a sort of Babbit in his businesslike conformity, and the real danger in the story is that he will condemn his son to a similar stunted existence. Theophilo, who has an appreciation of Americans' historical character, sees the son, under his tutelage, reverting to the true pioneer character of his people. The three-way conversations between father, son and Theophilo are the real meat of this novelette. Featherstone objects to Peloroxo's description of his former self as a "hick;" Theophilo realizes that the h-word "was the most mortal affront that could be applied to those central States," but Peloroxo sees it as a fair label, since "as I found to my cost when I began to meet the rest of the world, that my outlook was a bit, er -- provincial." Again, it's not his American-ness that made Peloroxo "provincial," but a certain bourgeois decadence embodied by his father.

His bold spirit had come to him from his father's father and from that father's father, who had been of those hardy pioneers who had built the foundations of that great America of the north. Just such men as we need here in Amazonas to develop the equally great possibilities of this country....It was clear that he was swayed between obedience to the call of his father or to the call of his grandfather. But for only a minute. His spirit clung true to the demand for freedom and action that was his heritage.


Improbably, Featherstone joins our heroes in their pursuit of the pirates, determined not to let his son out of his sight. He's appalled to learn how Peloroxo has adapted to native ways in the jungle. "I don't know that I like all this pandering to heathen priests," he protests, "and I'm sure that your Uncle Malachi and Aunt Sarah would not approve." The old man warms to the action, however. In the heat of combat he cries out, "Gimme a gun. By golly, somebody gimme a gun and show me how to shoot it." Later, he encourages his boy with strong language, or at least the hint of strong language that editor Arthur Sullivant Hoffman allowed. "To the -- with the law," he says, "Go on and win your own fight, son." At the climax the student surpasses the master with his audacity and the peculiar martial arts of his people. "The art of striking with the fist as you gringos do does not come easily to us of the South," Theophilo confesses after describing his clumsy brawl with an enemy. In the end, Featherstone recognizes that his son, in a foreign land, has become more authentically American than he. "You have grown in this wide open unsettled country to be a man such as my father was when he took the trail out to our wide open unsettled plains." He also recognizes that this disqualifies Peloroxo from any position in the family firm; "I am afraid that you would be a most disturbing element in our settled ways of business." Worse, from the son's standpoint, "I'd die in the family factory." Everybody wins, however, since Featherstone goes home to put the family firm in the tagua business, with Peloroxo and Theophilo as his regular suppliers. While Theophilo is too obviously a mouthpiece for the author, he's still an entertaining personality in his own right, and the story has that something extra to it that may enhance both its entertainment and educational value over time.
Posted by Samuel Wilson at 7:26 PM