'He talks of the tickle! By the blimey, I do not play with you.' 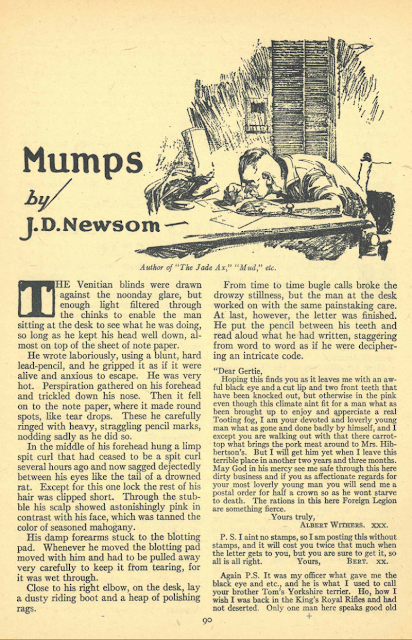 J. D. Newsom was one of pulpdom's leading writers of Foreign Legion stories, along with Georges Surdez and Robert Carse, but he had probably the least reverent attitude toward the Legion (if not colonialism in general) of the three. It's certainly hard to imagine Surdez writing anything like "Mumps" (Adventure, Jan. 10, 1926), a pure burlesque so indifferent to the usual Legion tropes that a battle with Arab raiders is mentioned only in passing, as a minor point in a letter written home to his girl by Withers, a Cockney legionnaire tasked with being an orderly and English teacher for the abusive martinet Captain Trudaine in Algeria. It's pure vaudeville when the suspicious Trudaine performs a body-search on the ticklish Withers. The Cockney's only friend, or at least the only fellow-English speaker, is the American goldbricker Curialo, who's always happy to share Withers' hard-earned three-sou bottle of red wine. Learning from Withers that Trudaine has come down with the mumps ("Imbecile, do you not perceive that I am in the grip of a grave malady? My head boils!"), Curialo convinces him to steal the captain's uniform as part of an elaborate practical joke to ruin the Captain's reputation. The American's plan is to put the uniform on Krause, a crazy German ("You know 'ow he goes about saluting lamp-posts and such-like"), get him drunk on bapeli, a native alcohol, and send him to a swanky party to make a fool of himself.

"Bapeli is a firey, vile decoction, specially distilled to appeal to the native palate, which is non-corrosive and heat-proof," Newsom explains, "Its effect on the white man's brain is immediate and lethal." After two rounds, Krause's eyes "glittered more coldly than ever." Bapeli's effect on the already-addled German is to convince him that he really is Trudaine, and that he should close the shanty saloon he's been drinking in. Krause/Trudaine is now determined to denounce the husband of Madame Chaillot, the hostess of the party, for selling the Legion tainted meat. Curialo finally has to KO Krause for the second time that night before he continues his rampage in the native village, where "I will listen to the flute and the tomtom and watch the wriggle-wriggle dance." However implausibly, his imposture has the desired effect. The real Trudaine is sacked, though not before he clobbers poor Withers once more.

"Mumps" reads like the work of a writer temporarily impatient with his chosen genre, though Newsom would write fine Legion tales to the end of his pulp career and his appointment to direct the Federal Writers' Project. A lot of it is silly accents, both Trudaine's Franglish and Withers' Cockney, but unlike some pulp writers Newsom is trying to be funny here and more or less succeeds by piling absurdity on absurdity. It's an oddly structured story, setting up Withers as the protagonist but putting Curialo in charge of Krause for the climactic comedy, but the story's just amusing enough for me to forgive that slight awkwardness.
Posted by Samuel Wilson at 6:39 PM