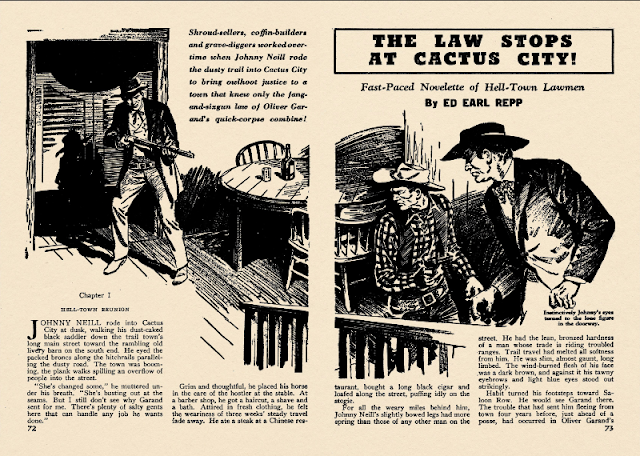 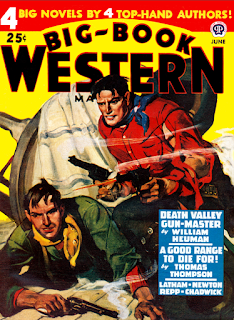 Were pulp readers more likely to be rejected suitors? Did pulp fiction cater to their fantasies of revenge on romantic rivals? Stories like Ed Earl Repp's "The Law Stops at Cactus City!" (Big-Book Western Magazine, June 1947) make me wonder. Repp started out as a science fiction specialist in the late 1920s, but by World War II he was writing westerns almost exclusively. "Cactus City" was one of only five stories he published in 1947; three of them were for Big-Book, one of Popular Publications' many western monthlies. The setup is simple: some time ago, Johnny Neill had been prematurely accused of murder -- the man he shot recovered -- and was run out of Cactus City. He returns bitterly after four years to entertain an offer from gambler Oliver Garand to help him take over the town. Garand wants Neill to kill the new sheriff, Vern Tyson, who's ordered him to shut down his crooked layouts and stop rolling drunks. The gambler assumes that Neill will be motivated by the fact that Tyson has married Johnny's old girlfriend, Dorothy Miller. Tyson is a model of an unworthy husband and lawman.

Vern Tyson, second-rate lawyer, had always fancied himself another Abe Lincoln, and Johnny had to admit that the man's emulation of the late president was complete, down to trimmed beard and soft, flat button shoes.


Tyson lacks Lincoln's fighting prowess, however. More importantly, he lacks "sand," that intangible quality that allows an outnumbered man to enforce law and impose order through force of personality. He wavers from neglect of crime to excessive enforcement, never knowing when to let things slide, ultimately preferring to depend on overwhelming force. His idea of cleaning up Cactus City involves calling in a detachment of Texas Rangers, not realizing that doing so "would make him the laughing stock of town, a political buffoon destined to failure in anything he later attempted." Recognizing Tyson's inadequacy, Dorothy's father, who had helped run Neill out of town, now urges Johnny to stay on as marshal. He's reluctant at first, but seeing the miserable life Dorothy leads as Mrs. Tyson -- she lives in the jailhouse -- and learning that Garand has designs on her himself, Johnny decides to wear the marshal's star, putting him on a collision course with both Garand and Tyson. Poor Tyson has the deck stacked against him by a higher power; his death is a foregone conclusion, as is Dorothy's reunion with Johnny after the requisite kidnappings and gunplay. Tyson at least dies honorably, albeit foolishly, charging into a fusillade in a brainless attempt to rescue Dorothy from Garand's clutches, while Johnny prevails with stealth and a sure gun hand. Still, he exists only to be dispensed with, and that makes the whole story seem more contrived than normal. It wouldn't bother regular readers, I suppose, if that's what they wanted to see. Did they want to see it that badly? The number of times such a story was told in pulp westerns might answer the question one way or another.
Posted by Samuel Wilson at 7:17 PM