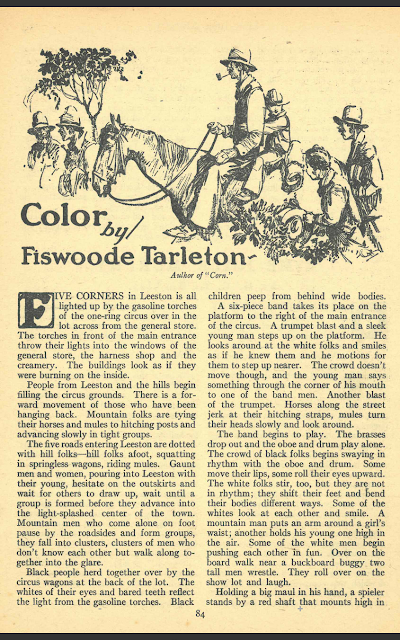 It's no reflection on legendary editor Arthur Sullivant Hoffman for me to say that the last thing I expected to see in the pages of Adventure in the 1920s was a thriller on the subject of racial injustice in the American South. Yet Hoffman clearly had a fondness for author Fiswoode Tarleton, who first appeared in Adventure in November 1925 and published fifteen stories there, including several after the editor's 1927 departure. Other than Adventure Tarleton appeared mostly in more literary magazines, though he did also make one appearance in Weird Tales. There's nothing fantastic about his second Adventure story, "Color " (January 10, 1926). It's the story of the day the circus came to the town of Leeston, attracting the curious of all races and social classes. Tarleton carefully observes the ways different groups approach the town, especially the mountain folk who come in very tentatively, instinctively congregating in groups of their own kind, even though individuals may be strangers to each other. Every group occupies a specific piece of space to watch the circus spieler make his spiel, except for an interloper who dangerously crosses many lines. He's a stranger to everyone, standing apart from all groups and thus drawing all eyes to him.

A big mulatto man steps out from the swaying blacks. He folds his arms and throws his head back, stands by himself, a statue cut in yellow stone. On his bare arm and neck mounts and ridges of muscle, salient in thelight of the gasoline torches.


The stranger attracts the special attention of Leeston's two law enforcement officers. Sheriff Floyd Jett is the more sympathetic of the two, the least eager for confrontations, the most ready to let everyone have a good time. Marshall Steve Dodie, on the other hand, has hate in his eyes, "the same blind hate that has driven all the blacks out of Leeston, driven them to the railroad head and to the hills." Dodie is outraged when the mulatto is the first man to ring the bell with the hammer in the traditional carny test of strength game, while Jett is reminded of the Discus Thrower of classical sculpture. John Henry-like, the mulatto rings the bell repeatedly, finally doing it one-handed instead of with both hands. All the while, he's been exchanging dangerous glances with a white circus performer, "the woman in flesh-colored tights." Everyone knows that the man spells trouble. The blacks, fearing the whites' resentment at being shown up by the strongman, are as eager to keep their distance from the mulatto as he is to stand apart. Dodie is enraged when Jett lets the mulatto buy his ticket for the circus, but the sheriff himself realizes that the mulatto is almost thoughtlessly asking for trouble. He sits apart in the colored section, worryingly close to the white section. Tarleton tersely defines the tension in thriller-friendly present-tense prose.


Tarleton expertly uses that distance to ratchet the tension one foot at a time as the mulatto shifts himself closer to the white section while Jett judges when to intercept him, while Dobie watches grimly from the first row. The mulatto's gaze shifts from the woman in flesh-colored tights to his own forearm as he compulsively picks at his "yellow" skin. Once he gets a "familiar" look in his eyes the sheriff knows he has to take action, but the marshal acts first.

Hoffman has nothing to say about Tarleton or his story in this issue's "Camp-Fire" section, but the editor does go off on a rhetorical flight against critics who dismiss Adventure for its "melodramatic" content, its "pages kept clean of sex," or the cheap paper it's printed on. He boasts that since the world war "there has been a very pronounced turning to our magazine because it tries hard to keep clean from sex, loose ethics generally, effeminacy and decadence." The interesting thing about his tirade is that, despite whatever reputation for reactionary conservatism pulp might have, Hoffman's strictures leave room for a story like "Color." He may have had that specific story in mind when he asks "How many of them, in a magazine of highly calendered paper, would still seem melodramatic" to critics. The editor concludes that the pulp format "admits to our blaze only those who form their own judgments and form them from facts, not opinions or theories." Posterity's judgment may yet prove more favorable to Adventure than even Hoffman could imagine.
Posted by Samuel Wilson at 6:34 PM