'Johnny Paseo made no noble move to meet the man with fists.' 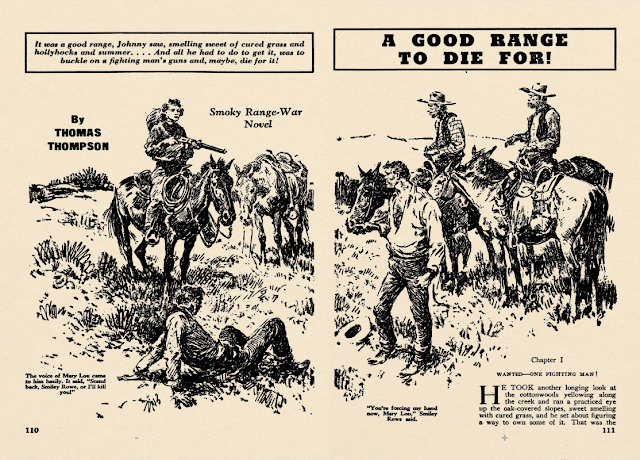 Sometimes one good idea can turn an ordinary pulp plot into a good story. Thomas Thompson had such a good idea in "A Good Range to Die For!" (Big-Book Western Magazine, June 1947). The idea was that his hero, the drifter Johnny Paseo, doesn't really know how to fight without guns. That means there'd be no blarney in this novelette about fist-fighting being a noble or uniquely honorable or culturally distinctive mode of combat. In fact, it's the villain, or actually the subordinate villain, who has a natural mastery of unarmed combat. For Thompson, at least in this story, that helps mark Smiley Rowe as a sadist; he enjoys hurting people with his hands. For Johnny Paseo, fighting is a more practical business.

Experience had taught Johnny Paseo that when he had the upper hand he should keep it. He had never been a man to fight with fists, anyway. If a man was his friend there would never be need of fists. If a man was his enemy it would take more than fists to settle the score.


Johnny's pragmatism helps him resist Smiley's taunting temptation to fight like men in their first encounter. Later, when Johnny doesn't have a gun or the upper hand, Smiley beats the stuffing out of him. They're enemies because Johnny has befriended Old Gramp Britton and his granddaughter Mary Lou, among the last small landholders holding out against Smiley's master, Cleg Partridge. Luke Britton, Gramp's son and Mary Lou's dad, had been sheriff in these parts, but had fallen off a cliff to his death, leaving the field wide open for Partridge and Rowe and leaving Mary Lou hostile to the idea of gunplay. Gramp believes that his son had been pushed, and probably beaten first, and while taking a beating from Smiley Johnny Paseo deduces that the big man must have been the one to kill the sheriff.

The story heads inevitably into Ranch Romances territory as Johnny and Mary Lou fall for each other, handicapped by Johnny's rep as a gunman, but before this Thompson has already established his credentials as a superior pulp writer. He'd broken into pulp briefly in 1936 in Popular Publications' own western romance title, but only started publishing in earnest during World War II. After the war he really poured it on. "A Good Range" is one of three stories he published in Popular western titles in June 1947 and 27 he published in the year as a whole. If "Good Range" is representative of the year's output, Thompson was maintaining a high level of quality; he has a better grip on character and his style is simply better than anyone else in this issue. It reads more like a genuinely original work of imagination than a recital of formulae. The ending is predictably happy: Johnny forces Smiley into a fast-draw gunfight and wins, while Mary Lou overcomes her revulsion towards guns to save Johnny's life by blasting another of his enemies "She had done that for him, done it with a gun," he exults, "She was a girl for a fighting man!" But there's really no good reason for this story to end any differently, and Thompson writes well enough that you can indulge him and his happy ending.
Posted by Samuel Wilson at 6:58 PM