'He knew very well that strange things came out of wild Africa with the slaves.' 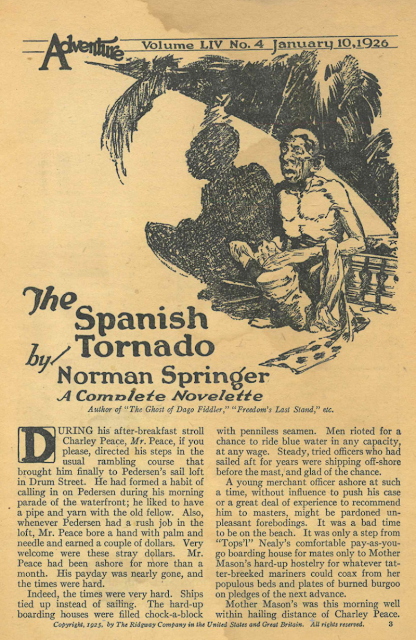 Norman Springer told The Editor magazine in 1918 that he wasn't the typical writer. He had no youthful urge to write or tell stories, but was only looking for a way to make easy money when he signed up for a correspondence course in movie scenario writing. He bombed as a scenario writer but got his real education in a night-school class on short story writing. After the usual period of writing "for the waste basket," he sold a story to Adventure in 1914. "About all I remember about that event is my stunned amazement when the postman handed me the little brown envelope with the pirate in the upper left hand corner," Springer recalled. A subsequent sale to Argosy actually made it into print first, two months before "For Ways That Are Dark" appeared in the December 1914 Adventure. He broke briefly into the slicks with two 1917 stories for The Saturday Evening Post, but mainly stuck with the pulps, not too prolifically, when not writing novels. "The Spanish Tornado," his lead novelette for the January 10, 1926 Adventure, was his first pulp story in a year and a half. It's a period piece, starting in 1877 San Francisco where down-on-his-luck sailor Charlie Peace gets a lucky break when he lands a berth as second mate of the Oloron on the strength of his name. The superstitious Captain Peter Lamont hopes that Charlie will bring peace to his turbulent ship. Complications ensue almost immediately when the captain brings his new bride on board. Charlie recognizes her instantly as La Carmencita, the Spanish dancer he fell for on first sight in a Frisco theater. The crew was on edge even before a woman and her supposed bad luck came on board, however. The ship is haunted, if not dominated, by the presence of Jude, its black steward, who seems to have a supernatural power over the captain. Springer conveys Charlie's increasingly hysterical perception of the black man in language that today's readers might read as making explicit many white folks' raw fear of the Negro. He complicates the horror, however, by revealing that Jude was complicit, along with Captain Lamont's father, in the latter-day transatlantic slave trade, using "Egbo" black magic to keep the slaves, if not the crew, in line. Jude seems to be planning to sacrifice La Carmencita to avenge the old Captain, who was killed for his cruelties by the dancer's father long ago. Springer aims for horrific effects -- his previous pulp appearance had been in Weird Tales -- but undermines them, for posterity at least, with a florid, almost Dickensian prose style and a weakness for accents. I understand that there's a realist impulse behind that, a desire to write out speech as the ear hears it, but the effort usually ends up replacing realism with mere rhetoric and taking a tale straight to the realm of camp. Jude (see first-page illustration) is supposed to be a figure of terror -- "No child's dream of a with could have revealed a more unhuman and sinister looking creature" -- but terror turns to travesty whenever Jude speaks in his minstrel-show voice. Likewise, La Carmencita is supposed to be a romantic ideal and a noble, Christian soul, but talks like a cartoon character:

"What I care he keel me!" exclaimed Carmencita. "You not onderstan' God, Meester Peese. He, my Pedro, take me out of the hell back there. Now I make me prays and the good God takes 'eem out of 'ees hell here. It ees so. No more the evil ones can come to heem. The Evil, the neegar, God make feenish!"


Mine is inevitably "presentist" criticism, but it's hard not to read old prose with other than a present-day sensibility. Since a lot of pulp fiction from the same time still passes muster today, and not just the hard-boiled stuff that shaped modern idioms, it seems fair to call out inferior writers like Springer who probably didn't satisfy contemporary readers, either. Arthur Sullivant Hoffman apparently liked him, but that doesn't mean we have to.
Posted by Samuel Wilson at 12:23 PM