'From first to last, I punished Laurens justly.' 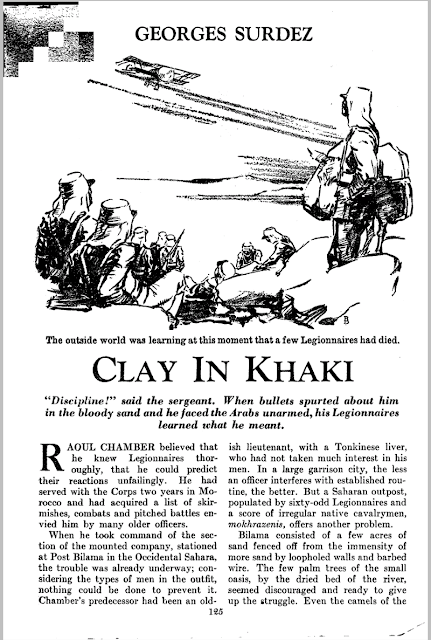 Many of Georges Surdez's Foreign Legion stories strike me as having split personalities. At heart, many of them are essentially character studies. But knowing his pulp audience, Surdez always finds a way to resolve his character conflicts through combat situations. "Clay in Khaki" (The Big Magazine, 1935) is a good example of this. The first half of it hardly has action in it, describing the fatal incompatibility of Verlinden, a veteran German sergeant, and Laurens, a popular recruit from a higher class background than was typical for Legionnaires. The story's told largely from the point of view of their new commander, Lieutenant Chamber, who sees Laurens as a decent kid unjustly goaded into desertion, and eventual death, by Verlinden. His attitude toward Verlinden is mild, however, compared to that of Laurens' buddies, who are ready to tear the sergeant apart when Laurens' body is returned to base. Still, Surdez lets Verlinden tell his side of the matter. The veteran found Laurens conceited; the younger man "thought himself my superior" and openly made fun of the sergeant, undermining his authority. That might just be an authoritarian talking, but this is the Foreign Legion, where discipline is everything. Seeing Verlinden's point, but also seeing that his position under his command is no longer tenable, Chamber arranges for his transfer to Indo-China, accepting the sergeant's suggestion that he, Verlinden, apply for the transfer himself in order to save face. But before the transfer can be finalized, Chamber's unit must go out in pursuit of a strong force of bandits. In the middle of battle mutiny breaks out as men refuse to take orders from Verlinden, and Chamber finally has to disarm him in order to have any hope of rallying his men. Then comes the ironic twist. Mocked by the men and believing his career ruined, Verlinden decides to commit suicide-by-Berber, charging the enemy position armed only with his automatic pistol.

He was a true Legionnaire, in love with the spectacular and, his life being sacrificed, he granted himself the luxury of exacting admiration from the very Legionnaires who had laughed. To die was nothing -- if it meant that he would be remembered.


Inevitably he goes down in a hail of gunfire, but when some Berbers venture from their position to plunder the body, them men who had scorned Verlinden moments before now go berserk in defense of his corpse. "Verlinden's personality had fled wherever the spirit travels after death, but there remained his clay and his uniform," Surdez writes, "His head, taken as a trophy through the market places of desert villages, would be a reproach to his Legionnaires." By sacrificing himself for purely selfish reasons, Verlinden inadvertently wins the day for the Legion. The question of whether Verlinden was justified in his treatment of Laurens has been forgotten, proof that the story was more about Verlinden all along. Surdez doesn't really imply that Verlinden's conduct vindicates him, and his reluctance to pass final judgment is a nice touch from an author I've only rarely disliked.
Posted by Samuel Wilson at 3:48 PM