'He said politely that North Japan was notoriously unhealthy during the Winter season.' 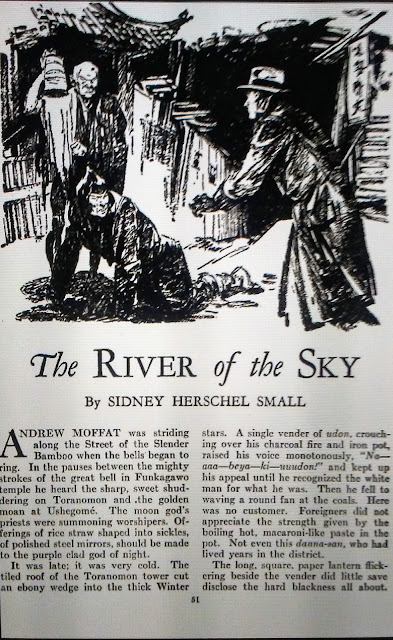 Sidney Herschel Small was one of the pulp writers I discovered in the pages of a contemporary slick magazine, Collier's Weekly. He specialized in East-West encounters, whether they involved Americans exploring the Far East or Americans exploring their local Chinatowns. His Collier's stories don't exactly lack action, but Small's pulp writing is naturally more energetic, if no more or less accurate in their representations of Asia. "The River of the Sky" (Adventure, April 15, 1932) is set in modern Japan, but from Small's descriptions you'd think that Commodore Perry had only just arrived. Apart from the presence of the American businessman hero, A-1 agent Andrew Moffat, aka "Hairy Foreigner," and his rival, one of those dreaded half-castes, you'd think the country was still in Shogun days. Of course, if you're going to set your story in an exotic place, the place had better be exotic, however aggressive Japan actually was about modernizing. Small gives his readers a vivid if not salacious account of the kammairi procession, in which worshippers, despite the wintry conditions, run naked, or as nearly naked as they dare,to the temple of the moon god. From that spectacular starting point, he gets to the meat of his story as Moffat repels assassins sent by his half-caste rival and rescues an elderly man from becoming collateral damage. He takes the old man in to warm him up and make sure of his health, and learns that they have a common enemy in the half-caste. Kagawa Omura once was a big man in this town before George Yakahira, the half-caste, ruined him. Kagawa's daughter, descended from samurai, is now a mere servant in Yakahira's household, and that is one insult too many for the proud old man. This sets up a situation I've seen before in pulp fiction, though I may well have seen it in a later story by another of the Oriental story specialists like Walter C. Brown. The idea is that the broken old timer gets his foot in the door, the better to carry out some baroque revenge plot, by offering the villain the last precious thing in his possession. In this case, the River of the Sky is a beautifully crafted ceramic bowl that any collector, or anyone in the export-import trade, would treasure. The payoff, of course, is that this final tribute from vanquished to victor is -- in this case pretty much literally -- a poisoned chalice. The gimmick in Small's story is that Kagawa drinks from the bowl before Yakahira does, so the drink couldn't be poisoned -- could it? I haven't read enough mystery stories to know whether the explanation Kagawa gives at the end, which involves treating the bowl with two fresh layers of glaze, the first water-soluble, exposing a poison layer for the second tea-drinker, had been done before. It's the sort of cute ploy that's okay to close a relatively unambitious short story from a writer who's done much better in my own limited experience. Apparently Small had a series of stories in Adventure about the A-1 company, or so I infer from the way he drops names of Moffat's colleagues as if readers should recognize them. I'd be willing to read more to whether Small made anything of the more compelling story of Japan's modernization and its consequences for the rest of the world.
Posted by Samuel Wilson at 3:19 PM