SINGAPORE SAMMY: 'Save the bother,' Lauzanno snapped, 'I'll shuck my own clothes off.' 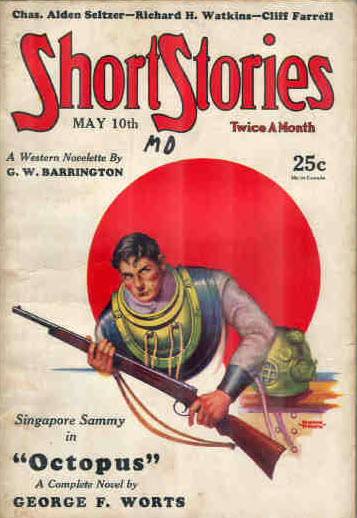 For Singapore Sammy's last bow (and only cover feature) in Short Stories, George F. Worts reverts to the formula of the second Sammy story. As in "Cobra," "Octopus" (May 10, 1931) makes much of its villain's resemblance to the title animal. Pierre Lauzanno isn't a half-caste, but he's nearly as bad in his author's eyes, "American born, of Portuguese ancestry and Oriental upbringing." While Worts mixes metaphors by giving Lauzanno "the arms of a gorilla," he is a moral octopus in the writer's eyes, "a man who would indulge in any form of murder to accomplish an object." "Octopus" also reproduces the earlier story's motif of partnership between a properly "hard" man and someone whose addictive nature makes him unfit for the life of a South Seas adventurer. The difference this time is that Sammy isn't one of the partners. Instead, back in the burg that gave him his nickname, he encounters a mismatched pair at a crooked card game. One of them, Kelvin Broome, "the Viking," is just like Sammy's protege from the earlier story, only more belligerent; he can't lay off the cards or the booze. The other, "the buccaneer," is virtually another version of Sammy Shea. The improbably named Lucifer "Lucky" Jones will end up being Singapore's sidekick in future stories; he proves a resourceful companion here as the men join forces to avenge Broome, who gets knifed in an alley after the card game breaks up violently. They mean to secure Broome's map of a sunken treasure; finding the treasure, they hope to send it to the dead man's poor family on an Arizona orange grove, to help his sister go to art school. These are the same guys who go around boasting of how "hard" they are, and who we're told are hard by the author. Mush!

Anyway, Singapore and Lucky catch up with Lauzanno and prove just how hard they are by torturing him into giving up the map, with unplanned assistance from an actual octopus that attaches itself to the villain while our heroes are dunking him in the sea. In the middle of this there's a weird moment when Sammy "placed the flat of his hand against a davit and looked at Lauzanno dreamily. Those who had experience knew that this was by far the most dangerous, most sinister expression that the red-haired young man used." I'm sure Worts only means that Sammy's on the brink of going psycho on his antagonist, but given the context of torture, and maybe because I'm a 21st century reader, I can't help reading something even more sinister into our hero's dreamy expression. Despite that, Lauzanno proves a tough egg until the octopus intervenes and makes him beg for mercy. Shay and Jones then make the mistake of letting Lauzanno live.

"Octopus" is the longest of the early Sammy stories, but the way it breaks into nearly equal halves  suggests that Worts (or the editor of Short Stories) may have slammed two novelettes together. The second half of the story becomes a tag-team match as Lauzanno hooks up with the infamous Bill Shay, Sammy's reprobate father, whom the villain tracks down with an alacrity that puts all of Sammy's previous efforts to shame. Things went badly for the old man after we left him at the end of "The Pink Elephant." Held responsible for the sacred title creature's death, Bill was tortured by angry Siamese authorities. Already poised to benefit from Sammy's death according to the will of Sammy's grandfather, Bill, who was previously amused to lead the boy on wild-goose chases, is now out for blood. He and Lauzanno lay in wait while Sammy and Lucky hunt for the treasure, then pounce when the younger men go down in diving suits to retrieve the sunken gold. Worts is good at selling every encounter between Shay the elder and Shay the younger as a big moment, especially when Sammy is shocked to discover Dad in a diving suit attacking him alongside Lauzanno. There's also a very cinematic moment when, in the midst of another intervention by a real octopus, Sammy catches one last glimpse of Bill before the old man zips up to the surface to escape the carnage that consumes Lauzanno, and from which our heroes barely escape. It's an exciting finish to a story that's just slightly overlong, though by modern standards the extra length is put to relatively good use building up Singapore and Lucky's friendship.

From here Worts took Singapore Sammy to Argosy, where he debuted in an eponymous serial in December 1931. As for me, I'll be going back to where I discovered Sammy, in the invaluable Big Book of Adventure Stories, before proceeding to items from my own collection. Of his three major characters -- Peter the Brazen and Gillian Hazeltine are the others -- Worts stuck with Sammy the latest. The conclusion of the 1936 Sammy serial Murderer's Paradise was the effective end of the author's pulp career.
Posted by Samuel Wilson at 3:50 PM