'Outside were the squaws and papooses, hoping that the thief would be tortured and that they might have a hand in it.' 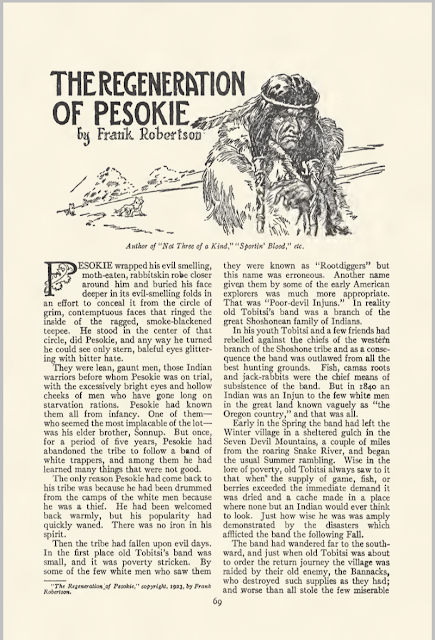 Many pulp stories focus on some test of courage. The protagonist is often misperceived as a coward, but for some reason or other he's shunned by his community or loved ones and must find some way to prove his true virtue to them. Frank C. Robertson's "The Regeneration of Pesokie" (Adventure, September 30, 1923) is such a story, with the twist of a grim coda in the Jack London style. The title character is the black sheep of a Shoshone tribe known as the Rootdiggers, recently returned to his people after five years following white trappers. "Among them he had learned many things that were not good," the narrator notes, until the whites finally drummed Pesokie out of their camp. In short, Pesokie makes no more favorable impression on his own people. Caught stealing food at a time of desperate need, he faces a terrible fate. "The man who would betray his own people to their death that his own belly may be full must die," says Pesokie's own brother. The rest of the tribe, in the manner of pulp aborigines everywhere, want Pesokie to die by torture, while the brother, Sonnup, would prefer the mercy of a quick end. It's his right, as the man who caught Pesokie, to recommend the manner of his death, so Sonnup convinces the tribe that leaving him naked in the snowy wilderness without food or weapons is a better torture than the fiery fate they were hoping for.

The circle visibly hesitated. Nothing was so dear to them at the moment as prolonged torture of the craven who feared not only death but hardship. Yet they could see a sardonic justice in the proposed punishment. They could imagine all sorts of suffering which the fugitive would have to undergo -- intensified a hundred times by his abject fear -- and it would be lengthened to an indefinite extent, since they could imagine him wandering for days amid the grim horrors of starvation and cold.


Sonnup gets his way, and also gets to sneak Pesokie a fur robe, a hunting knife and the tribe's remaining dogs. He reminds his brother that "You should die -- thief -- coward," but tells him to try for the nearby Bannack village, since "Even a Bannack will feed a starving stranger." This is the part, you might expect, where Pesokie redeems himself, either intentionally or inadvertently depending on the tone of the story, and regains the tribe's good graces. It doesn't quite turn out that way. No one in the tribe's going to miss those dogs Sonnup stole because they're not really domesticated. "Any time an Indian wished to lose a finger or two he had only to attempt to pet his dog," Robertson writes. After Pesokie had stolen their stores, the rest of the warriors had to kill most of the dogs to sustain themselves on their lengthy trek. Now Pesokie sees the remaining dogs as potential prey or potential predators. Numbers are on the dogs' side, and a still-starving Pesokie finds himself surrounded.

Almost by accident the old coward kills the first dog to attack, and as the others move in "A wild exhilaration flowed over Pesokie! He had ceased to fear! He was fighting at last -- the thing he had avoided all his craven life -- and to his intense wonder he found joy in it, and an overwhelming satisfaction. His weak medicine had suddenly become strong." Our hero has learned that "anticipation of suffering was much worse than the reality" -- but he has to die doing it. The story closes with a close-up of Pesokie's corpse, "On his face the peaceful look of a brave man." This is impressively grim stuff from an author still early in his career. Robertson had published his first story in 1920, his first in Adventure in 1922. He'd place six stories there in 1923 before moving on to become a mainstay of Short Stories, Ace High and West for the rest of the decade and into the 1930s. Robertson kept at it practically to the end of the pulp era, placing his last story in a 1957 Ranch Romances as one of the grand old men of the western genre.
Posted by Samuel Wilson at 4:18 PM