'Baal and Ashtaroth, they told people to raise hell, and the people done so.' 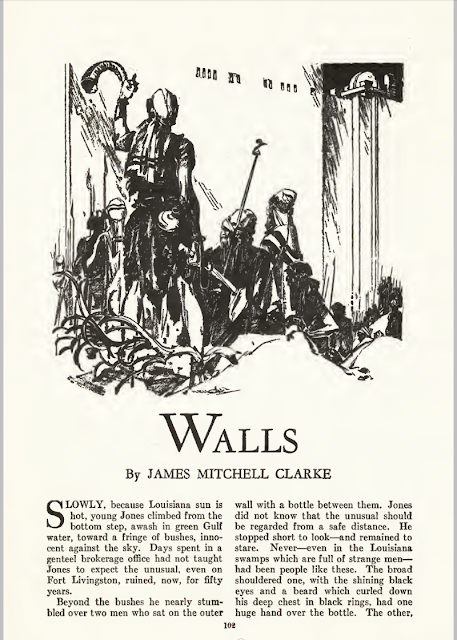 James Mitchell Clarke had a long career as a writer and educator, but only a short one in the pulps. He published nine stories in Adventure, plus one in the one-shot Adventure spinoff The Big Magazine, between 1927 and 1935, before devoting himself to a WPA project in the San Diego school system. One of those stories is the remarkable "Walls" (April 15, 1932). The remarkable thing about it is that it's a sort of debunking account of the biblical conquest of Jericho, as narrated by an immortal man. In what looks a lot like the opening of a series, we're introduced to our protagonists in modern-day Louisiana, sharing a bottle on the wall of a ruined fort. "Never -- even in the Louisiana swamps which are full of strange men -- had been people like these," thinks Jones, our POV character.

The broad shouldered one, with the shining black eyes and a beard which curled down his deep chest in black rings, had one huge hand over the bottle. The other, a slighter man, was plainly not a negro. Yet his skin was the color of chocolate; smooth and tight drawn; more like tanned leather than human flesh covering. His eyes, though only a few feet away, appeared to be looking across incalculable distance.


The strangers make friends with Jones and amaze him with tales of Jean Lafitte the pirate, told as if they knew the man. Amazing as that must sound, given that Lafitte flourished more than a century earlier, Belshar and Hovsep can top that easily. "We've seen some walls, Hovsep and me," says Belshar, the bearded one, who leaves Hovsep, the dark one, to tell of their role in the siege of Jericho. While "we follow the sea, Belshar and me .... once in awhile we find ourselves ashore and this was one of the times," Hovsep starts. Fugitives from the Persian Gulf, they became mercenary scouts for the Israelites under Joshua. In a dig at modern anti-semitism, Hovsep tells Jones, "It's maybe funny to you to think of [Jews] as fighting men. But they were -- a wild, hard, hairy lot, sleeping in tents, wondering where the next meal was coming from, scrapping with everybody they met; and licking 'em, too, mostly." Clarke doesn't soft-pedal Old Testament aggression. "Part of the Hebrew idea was to capture every town they came to and put the people out of the way," Hovsep recalls, "It saved trouble, and it was an order from their god." Iahweh, as Clarke calls that god, isn't bad compared to Ashtaroth and Baal, the dominant deities in Jericho, and their worshipers. "Them Canaanites were a scummy lot, take my word," Hovsep recalls. The priests of Ashtaroth take young women by force and make them temple prostitutes. The priests of Baal take young boys for human sacrifice. The family of Rahab, the biblical heroine, is victimized many times over. In Clarke's backstory, Rahab herself is taken from her family, while three of her brothers are chosen for sacrifice. Twenty years before Joshua's siege, Hovsep and Belshar, then friends of Rahab, made themselves personae non grata in Jericho by attempting to rescue her brothers, saving two of the three and leaving Rahab swearing that someday "my turn" will come.

Their past experience in Jericho recommends our heroes to Joshua for an infiltration mission, during which the meet and older, hardened Rahab, who sees "my turn" coming with the arrival of "the Evening Wolf," Joshua. She tells Hovsep and Belshar about a weak spot, caused by storm damage, in Jericho's strong walls. They relay this crucial intelligence to Joshua, who has just gotten his legendary marching orders, so to speak, from "the Lord's captain." "It isn't that I don't think it will work," Joshua tells them, "I don't doubt Iahweh. But I always like to help him when I can." He sets our heroes to work further undermining the wall until he has a change of heart. "I have not put my trust in Iahweh," he laments, "If we go through with this, His face will be turned away from His people." But Hovsep and Belshar decide they'll keep at it in secret, determined to do all they can to help Rahab get her revenge. Clarke has Hovsep tell what happens next in nicely ambiguous fashion. Did a miracle actually happen, or had "Joshua'd figured the balance better than he knew" when he put our heroes to work earlier? Whatever the cause, a slaughter ensues, but Rahab and her family are saved. Jones is so caught up in the story, virtually smelling the smoke of the burning city, that he doesn't notice at first that his new friends have disappeared, but not without leaving behind evidence that they actually had been there.

As you may have noticed from the excerpts, the gimmick of the story is that Belshar and Hovsep talk and tell their story in the vernacular of 1932. Maybe that's just Jones translating it in his own head, but I think it effectively establishes Clarke's immortals as eternal common men, neither archaically alien nor decadently refined. If I recall right, there was a sort of fad for this sort of writing in historical fiction -- F. Scott Fitzgerald used it in his experiments in the genre -- but "Walls" survives whatever faddishness there was to it. While it adds an irreverent note to a Bible legend, it also gives the tale a fresh sense of immediacy and empathy as Clarke underscores the horrors of Canaanite idolatry. Most importantly, Belshar and Hovsep sound like cool guys with many more stories to tell, and it would be a shame if this turned out to be their only appearance.
Posted by Samuel Wilson at 3:31 PM