Gunfight with the Glidden brothers 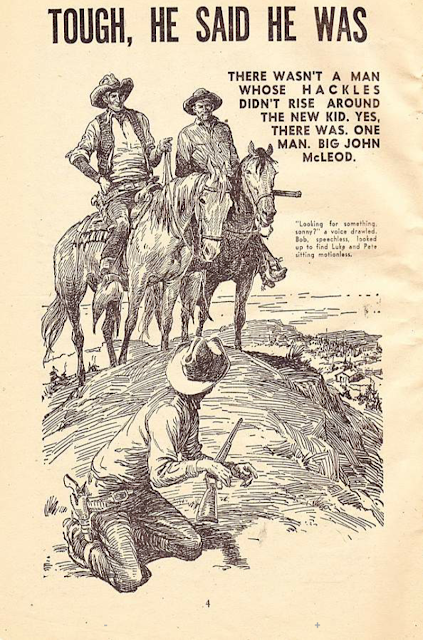 1955 was a late time to publish your first pulp story. In the western field, Popular Publications had converted a couple of titles to magazine format, but would soon kill them in favor of "true" adventures in the sweat genre. Thrilling had done away with most of its line at the end of 1953, leaving the most popular western pulps of the day, the monthly Texas Rangers and the biweekly Ranch Romances, as well as the quarterly Triple Western. The other surviving western titles came from Columbia, long considered the bottom of the publishing barrel, and Stadium, as the pulp arm of Martin Goodman's empire called itself then. Clayton Fox made his debut in a Stadium title, the June 1955 Western Short Stories, with "Tough, He Said He Was." It's a pretty basic character piece, the idea being that Bob Smith resents his mentor, Big John McLeod but gains a greater appreciation of him, and a greater sense of responsibility for his legacy, after McLeod dies in a freak accident. "You don't like a man you're forced on with a gun," the narrator observes, and that's how it is with Bob, for whom McLeod's hardscrabble ranch is the only alternative to reform school. After McLeod's demise, Bob falls under suspicion when a few cows are discovered missing from the older man's humble herd. At the same time, Bob feels the temptation to sell the rest of the herd and keep the proceeds rather than use them to pay McLeod's debts. Destiny points Bob toward a showdown with the real rustlers, the no-account Glidden brothers. Their in-jokey presence is probably the most noteworthy thing about Fox's debut, though I wonder how many 1955 readers recognized the joke. The Gliddens of the story are named Luke and Pete. The Gliddens of western pulp fame are Fred and John, who wrote under the names "Luke Short" and "Peter Dawson" respectively. Get it? I'm sure that the outlawry of the fictional Gliddens is meant as no reflection on the real-life authors, but maybe the name-dropping put a helpful smile on editor Robert O. Erisman's face just the same. The best thing about this little story is its modesty of scope. The big gunfight ends with no one dead, the stolen cattle reclaimed, and the Gliddens' cabin shot up until Bob's rifle barrel is too hot to touch. Fox introduces a potential love interest, but she never becomes more than that. We don't get the standard closing paragraph in which the hero thinks dreamily about the girl, because this story is more concerned with showing how Big John McLeod's lessons took. That's enough for this ten-page story to feel like a little change of pace. Fox published four more stories in Stadium pulps over the next two years before Stadium expired and he focused on novels -- though for all I know he's also the K. Clayton whose one and only western pulp story appeared in this same issue. The market for western short stories was drying up, but the pulps still gave aspiring pros an opportunity to learn how to write narratives that could sell.
Posted by Samuel Wilson at 3:53 PM