'Only a man after my own heart could make a mongrel find champagne in this place.' 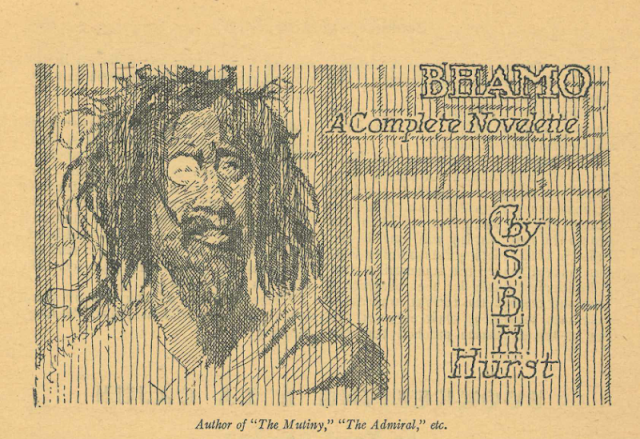 Horace "Bugs" Sinnat is an agent of the Indian Secret Service and a master of disguises. He is the protagonist of a series of stories by S. B. H. Hurst, which appeared in Adventure, Wide World Adventures and Oriental Stories from the mid-1920s into the early 1930s. "Bhamo" (Adventure, March 30, 1926) isn't the first Sinnat story I've read but it's the first to make any impression on me. Our hero is introduced pretending to be a "gone native" white in order to infiltrate a criminal enclave in Burma. He's on the trail of George Latimer Fritz Maurice, a.k.a. Menzies, an English renegade and "the greatest and most spectacular criminal ever known in India," now conspiring with native bandits to seize control of a territory on the Burma-India border that would make him a power broker. While Sinnat's act invites the contempt of natives and half-breeds, his impudent wit impresses the bandit leader Kwung Ksi, who takes Bugs for a former fighting man who could become one again if he lays off the booze. Kwung Ksi is an undisputed villain, but Bugs "rather like[s] the brute." He comes off slightly favorably compared with the more decadent Menzies and the more despicable half-breeds who haunt the territory. Hurst joins many pulp writers in contempt for mixed-race people, describing a "breed" tavern-keeper as an "animal" and a "disgusting caricature of humanity." Kwung Ksi at least has balls. "The native who kicked a white man was an unusual character," our narrator explains, "The coolies felt sufficiently self-exalted when they vocally abased the apparently degenerate and cast-off member of the stronger race."

Bugs has to employ psychology once Kwung Ksi and his partner Menzies grow suspicious of him. Kwung Ksi in particular is alarmed when he discovers, while frisking him, that Bugs is in very remarkable physical shape for a gone-native drunk. Now that he suspects that Bugs still is what he seemingly had been or could be again, Kwung Ksi instantly loses his enthusiasm for the reclamation project and urges Menzies to kill Sinnat. Menzies pretends not to share Kwung Ksi's doubts until he can interview Sinnat privately, thinking he can turn the presumed secret agent with promises of plunder and power. Bugs takes a big chance taunting Menzies for his pretense to aristocracy. When Menzies announces that he has royal blood, Bugs boasts mockingly, "So do I!" Finally, he convinces both men of his harmlessness by playing the alcoholic coward. Somehow, while suspecting that he's a British agent, they take his imposture seriously, leaving him so poorly guarded that he can sneak out of camp and contact the Imperial authorities. Hurst ends the story with the rout of Kwung Ksi's forces -- the bandit himself apparently goes down fighting, taking many enemies with him -- and Menzies' less courageous escape. Hurst clearly has plans for this character, as he leaves Bugs cursing the villain's escape and judging his mission a failure despite the rescue of gold and captive women. Whether he appears again is up to hardcore Hurst fans, if any live today, to tell us.
Posted by Samuel Wilson at 5:51 PM