'Foreigners don't enjoy the sanctity that we had a few years ago.'

"Black Powder Diplomacy" (Adventure, March 30, 1926) is H. P. Guiler's only known pulp story. Set at a chaotic moment in Chinese history when a young republic  was beset by warlords, it portrays increased resentment by Americans of a perceived lack of deference on the part of the Chinese, who requisition resources with little regard for white supremacy. "They've forgotten the lesson learned during the Boxer trouble [in 1900]," one American remarks, "and it looks like we shall have to give them another -- if we expect to stay here." An eager officer misses the good old days "when action was taken on the spot, and explained much later by letter when the affair had been settled and forgotten." Radio brings accountability all too quickly in the ultramodern 1920s, but our American protagonist insists on doing something now to restore the white prestige compromised by an influx of refugees from revolutionary Russia who've sunk to doing "coolie work." The problem with that is "when one white man loses caste out here, we all do." Unsurprisingly, the American's conclude that force is the only thing the Chinese will understand. Their challenge is to make their show of force look like something else. The arrival of a British admiral's ship gives them a pretext and an opportunity. The joke of the title is that the Americans fire the appropriate salute to the dignitary with live ammunition, out of alleged necessity, effectively terrorizing Chinese troops and ensuring compliance with previous American demands. "You will beat up Americans, will you, you yalla -----s," the American skipper roars, his meaning obscured slightly by Arthur Sullivant Hoffman's typical editorial reticence. This is the sort of "diplomacy" the Chinese still remember resentfully, though now, when they may think themselves in a position to practice similar diplomacy in the South China Sea and elsewhere, that same attitude they've long resented may be making a comeback in an America where the old nationalism seems new again. Not so long ago scholars might have read Guiler's story and deplored the arrogance it portrays, but the same story might find more appreciative readers today. 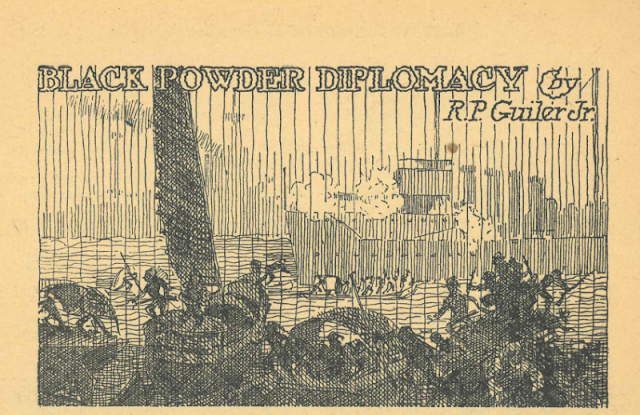 Posted by Samuel Wilson at 8:29 PM