'Are we children that you would ask us to believe you can fairly judge your own flesh and blood?' 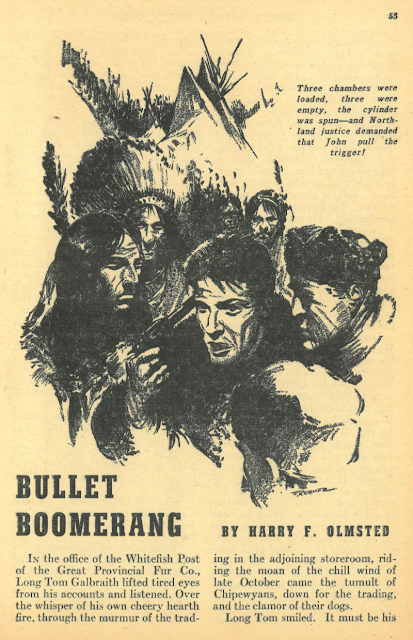 Harry F. Olmsted was a terrifically prolific western writer. In 1940 alone he's credited with 59 stories in the FictionMags Index. Sixteen of them appeared in Street and Smith's weekly Western Story, including "Bullet Boomerang" (November 2). In this short piece, Long Tom Galbraith saves his son John from Indian justice after the boy's accused of killing a tribal elder in order to elope with the old man's daughter. Olmsted is at pains to explain that Pasiska, the daughter of Lame Caribou, is actually a white girl, "given unto him by the white squaw of a great white chief."  After the main events of the story, he even has the Indians reveal that "There is a paper with the white man's word upon it, in the lodge of Lame Caribou," so there'll be no doubt about the legality of John Galbraith's marriage to Pasiska. John has a rival in love, and Long Tom a rival in business, in the form of Rene LeDuc, who happens to be the only witness to John's killing of Lame Caribou. Of course, whether John did the deed or not, a white man can't be left to Indian justice, and Long Tom asserts his right as the Great Provincial's factor to try the case. The Indians reasonably doubt his objectivity, but rethink their resistance when Long Tom proposes submitting the matter to divine judgment, to be revealed through a round of what Georges Surdez called Russian roulette. Long Tom's son isn't thrilled by the idea, but Dad assures him that "This is not a sinful gamble, ... This is a matter of honor, of life and death. The souls of two men, each having sworn to God, are on the block here. You must have faith, son, that if you are innocent God will exonerate you now."  What we have here is a twist on the old pulp formula of the white man using a pseudo-supernatural test to detect a criminal among superstitious natives. It's not the natives, but LeDuc the white man -- to the extent that pulp fiction regarded French Canadian trappers as white -- who is to be terrified into confessing, not because he fears God but because he fears bad luck. As it turns out, this test is as fake as such tests usually are, for Long Tom has loaded the gun with blanks, as LeDuc learns when he tries to shoot the factor. The natives are impressed just the same. "They moved in to touch him, murmuring strange words of awe [for Long Tom] had shown them a brand of justice new to the Lone Land. Chief Running Bear is especially humble in retrospect. "None but witless children could have gone so wrong," he tells Long Tom, "We were honest, but our mistake was in not calling upon the Great Spirit. Your faith was large, ours small and weak." Thus did civilization advance according to pulp history.
Posted by Samuel Wilson at 7:59 PM