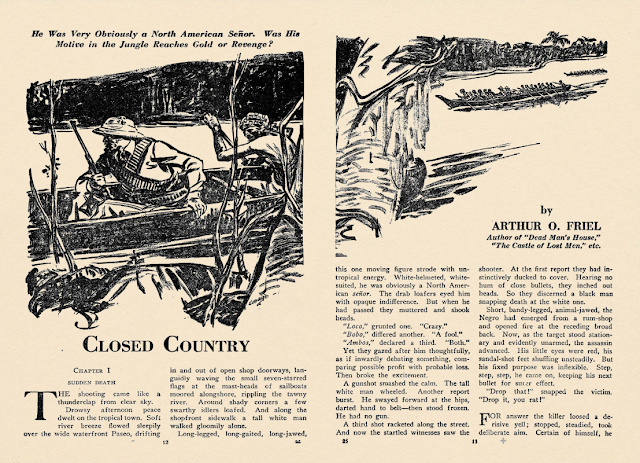 By the late 1930s Short Stories had become Arthur O. Friel's main market in pulps. He wasn't particularly prolific at this time; "Closed Country" (November 25, 1937) was his third and last story published that year, after only one Friel story appeared in all of 1936. I don't know what might have been going on in Friel's life in those years, but "Closed Country" struck me as an unusually hateful story, more preoccupied with racial hierarchy, more contemptuous toward blacks (the N-word is employed) than in other stuff I've read from him. It starts with our unarmed hero, Donovan, bravely trying to face down a black man with a revolver in Friel's usual stomping ground of Venezuela. Donovan is rescued when a stranger intervenes to grapple with the black and snap his neck. "I just didn't like this black bum," the interloper explains, "And I don't like the general idea of a black knocking off a white." He identifies himself as O'Brien, a Swede from Boston. Donovan identifies him as a likely guide for an expedition up the dangerous Rio Caura to where our hero hopes to scout out a route for a future railroad. O'Brien gathers a crew of reliable, manly Venezuelans, little removed from savages themselves in Friel's portrayal yet possessed of skills, a sense of honor, and a strong consciousness of superiority to Indians and other darker peoples. It's pretty hard-boiled stuff until the story veers into slightly more fantastical territory. Donovan has really been hunting for Tom McFarland, the man who swindled his father and reportedly fled into the jungle. He finds this McFarland ruling over some sort of lost race of people who are dark but not quite colored.

For one thing, these Indians looked unusually intelligent; faces longer, brows higher, eyes deeper than those of most aborigines. Also, their dark color was unnatural -- a dull greenish black, blending so softly into the forest shade as to make them almost invisible at a little distance. Although totally nude save for tiny dark clouts, they were so completely dyed that their real color was discernible only when they lay down to drink. Then a beam of sunlight piercing through the forest struck to the base of their thick black hair, disclosing scalp-skin almost white.


McFarland has a theory -- it's hard to tell how seriously we're meant to take it -- that his people are descended from survivors of Atlantis. He compares them favorably to the darker "humanimals" of the region. But he's no racist, really. "I got along by treating niggers and Indians like human beings," he tells Donovan, "They all are. Real niggers and real Indians, I mean. Half-breeds - pfah!"  Damn.... mixed-race people must have had a hard time trying to read pulps, with so many stories telling them they're the bottom of the human barrel. In any event, the ambiguous superiority of these dark-white tribespeople intrigues Friel more than whatever revenge agenda Donovan had, which gets forgotten as he gets to know McFarland better and fights alongside him against an invasion by a "back-bush gang" of "misbegotten mongrels," led by "an apparent white man. Even here, Friel perceives a hierarchy of courage and discipline. When McFarland's men attack, the gang's Indian guides flee as fast as they can swim, while "No clothed man fled." Predictably enough, McFarland dies, as do Donovan and O'Brien's Venezuelan companions, but not before he points Donovan to a fortune that will settle the old man's debt to our hero's father. Friel excels at pitched battles like the one that climaxes this story, and if you can overlook a racism unusually ugly even for pulp fiction "Closed Country" shows that at a relatively late point in his career he could still deliver the blood and thunder. He seems to have had an idea of doing a series with Donovan and O'Brien, but it's unclear from the FictionMags Index whether they ever came back for an encore.
Posted by Samuel Wilson at 7:27 PM