'He had the satisfaction of hearing cries of pain.' 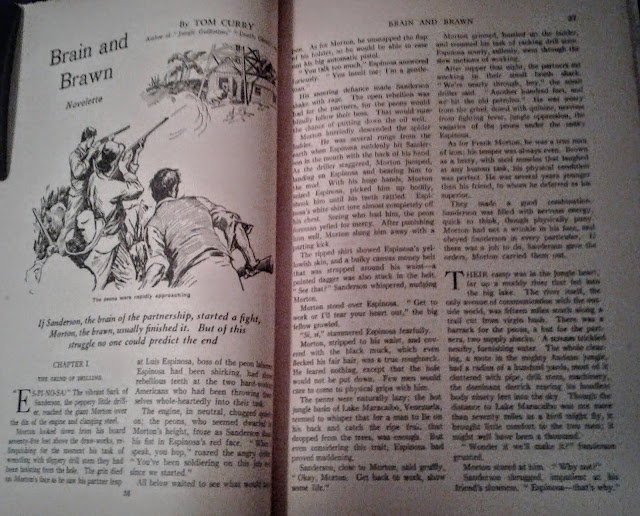 Illustration from my own collection 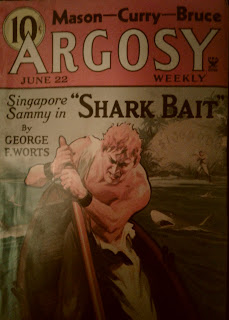 Tom Curry trespasses on Arthur O. Friel's territory in "Brain and Brawn" (Argosy, June 22, 1935), set in oil-rich Venezuela. You'd think the present Bolivarian regime were in charge back then, given the way the natives treat the two American heroes running an oil rig. A Venezuelan concern wants to drink their milkshake, so to speak, and their operative, the peon foreman Espinosa, tries to make life difficult for the intrepid gringos, apparently the only people around interested in working hard. They are a typical Mutt & Jeff team; Sanderson is the "peppery little driller," Morton the "mighty giant" who does the heavy lifting and keeps the peons in line when they get uppity. In other words, Sanderson is the "Brain," Morton the "Brawn" of the title. The twist in Curry's bromance is that as they fight their way out of camp and flee through the jungle, hoping to salvage their well before the local rivals move in, a role reversal takes place. Morton gets shot in the leg and goes virtually lame, making it necessary for Sanderson to become the brawn by bearing his weight through the jungle. And as fatigue gradually clouds Sanderson's mind, it's up to Morton to do the quick thinking that eventually saves both men. Calling this a "bromance" is neither an anachronism or a joke. Morton and Sanderson are very close friends, albeit certainly in a purely platonic manner, with Sanderson the dominant partner despite Morton's tremendous strength. The story reaches its emotional climax when Sanderson, captured by the "Venzies," is taken to identify Morton's grave, having told his captors that his friend, still free, had died on the trail. Sanderson assumes that he'll be killed whether Morton's death is verified or not. Recalling Morton's hiding place, he hopes the big guy was smart enough to find another (he was), but has his doubts.

Sanderson almost wept; they'd surely find his partner, for Morton could not have worked very far by himself, and would not have done so, since he would wait for Sanderson to come back to him. Eager for a last look at his friend, the driller pushed forward. He wanted to die beside Morton.


Make of that what you will. Action fans were less distrustful of strong emotions back then. "Brain and Brawn" isn't top-flight Curry but it holds your interest easily enough and it has arguable historic interest as a document of the seeming arrogance that many Venezuelans resent in Americans to the present day.
Posted by Samuel Wilson at 6:37 PM