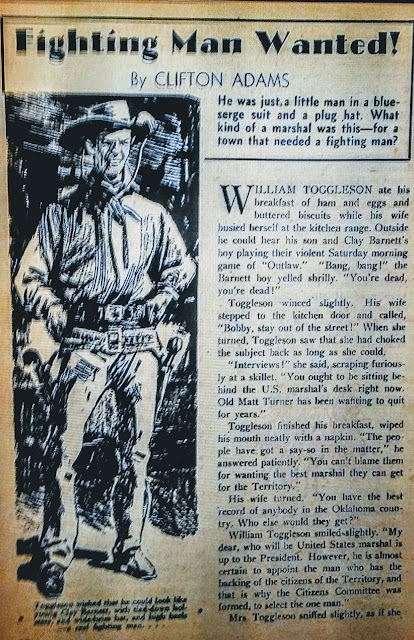 A man faces a test of character and responsibility when another man's son is kidnapped by mistake, in place of his own son. Movie fans will recognize that as the story of Akira Kurosawa's modern-dress classic High and Low (1963). Crime fiction fans will recognize it as the story of the novel that inspired Kurosawa, Ed McBain's King's Ransom (1959). The core idea most likely had been done many times before in pulp fiction. One such time was in the pages of the May 1952 issue of New Western, one of Popular Publications' stable of western titles. Clifton Adams' "Fighting Man Wanted!" doesn't have the class element of the McBain and Kurosawa stories. Instead, the protagonist and the father of the kidnapped boy are peers, more or less. William Toggleson and Clay Barnett are deputy marshals in amicable competition to succeed a retiring old-timer. Both men are reasonably well qualified, but Toggleson, our protagonist, is handicapped by his appearance. Toggleson simply doesn't dress the part. He's "A far cry from the fire-eating lawmen like Earp and Masterson and Hickock. But then I'd look darn foolish wearing leather vests and tied-down .45s just to sit behind a desk. Barnett is the favorite for the post "because he wore a wide-brim hat and high-heel boots and had two .45s tied down on his legs. And maybe because he had two notches in his guns, representing two outlaws he had killed." To drive the point home, the illustration on pae one is of Barnett, not Toggleson. Our protagonist had been a town-tamer in his heyday, but he never was a killer and that, combined with his modest dress, makes him hard to idolize. When his and Barnett's boys play outlaw, Clay's kid boasts that he's "a fightin' U.S. marshal, like my father," while young Toggleson says, "Ah ... I'm nothin' much, I guess."

It's that boasting that gets Clay's boy kidnapped by an outlaw out of prison and out for vengeance on Toggleson.  Because of the circumstances, Toggleson feels responsible and talks Barnett after going after the boy himself. But he questions his resolve almost instantly. "He found himself thinking: I'd be a fool to go up there and let him kill me. It's not my son." Adams adds, "Immediately he felt ashamed of the thought." Yet he thinks it again as he closes in on the outlaw, though the thought doesn't stop him. This being a pulp western short story, there's no doubting that Toggleson will save the boy, slay the outlaw and earn the marshal's badge, but Adams still makes a halfway decent story out of it by stressing that Toggleson is not some picked-on loser who has to redeem himself for anything, as in the typical "coward" scenario, but simply someone suffering through a middle-age crisis of self-doubt despite the esteem of his community. The story reads as less cliched than it could or almost should be, and that's the mark of Clifton Adams' quality as a writer. He was one of the authors who made the last decade or so of pulp westerns a golden age of the genre.
Posted by Samuel Wilson at 4:41 PM