'She either surrenders those papers or shall be stripped as naked as the day she was born!' 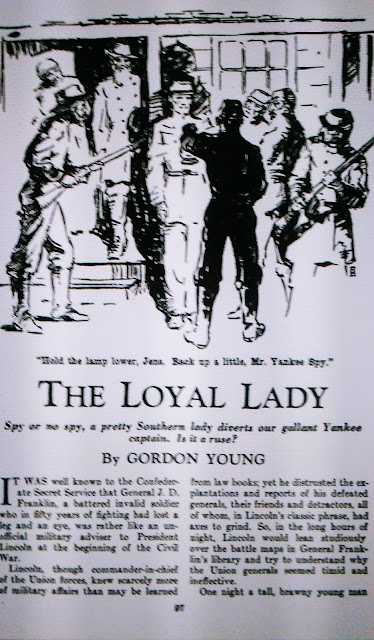 Beneath the magnolias and grits of Civil War fiction, Gordon Young's "The Loyal Lady" (The Big Magazine, 1935) is a properly paranoid spy story. In 1862 Captain Haynes of the Union army is sent south across enemy lines incognito to get accurate information on the size of General Lee's army. Lee's opposite number, Gen. McClellan, has been paralyzed, to Commander-in-Chief Lincoln's dismay, by apparently exaggerated reports of the Confederate force he faces. Haynes hopes to pump a Major Rawks for information, but finds Rawks hunting for a Union spy, a southern belle turned turncoat, who's just stolen just the papers Haynes is looking for. Rawks provokes Haynes' sense of chivalry, not to mention his patriotism, by vowing to hang the supposed spy, Maybelle Marshall, hanged, despite her safe-conduct pass from Jefferson Davis himself. Worse, when they actually meet Miss Marshall, Rawks insists on a full-body search.

"Barbarous, sir!" said Haynes desperately.
"Undoubtedly," the major agreed with composure, "But war, my friend. She is a traitor. And one who has no honor can not claim the protection of decency and modesty. Corporal, disrobe the woman!"


A corporal is unwilling to do this grim work, and a backwoods private gets his face slapped for trying. Rawks decides to do the job himself, but Haynes -- still in disguise as a brother Rebel officer -- refuses to allow it. Rather than fight, Rawks agrees to leave the search to Dinah, his "buxom negress" maidservant, who reports back empty-handed. It turns out, however, that Dinah is, understandably, a clandestine Yankee sympathizer. "Black folks dey know dat de Yankees is a-fittin fo' us," she explains. She doesn't trust Haynes, unable to look past his southern uniform, but Marshall accepts his assistance in a daring escape. In return, her gift of a Derringer enables Haynes to escape after Rawks finally figures him out. In the end, Haynes learns that Rawks and Marshall had set him up. It had all been a play designed to get Haynes, whose coming they learned of from black spies within the household of Haynes' commanding officer, to deliver more fake intelligence back north. That bemused commander offers the story's moral: "When any Southern girl tells you she is loyal to her country -- don't be a fool! Believe her. She means the South!"

The Big Magazine was a one-shot published by Popular Publications in 1935, shortly after they acquired Adventure. The idea, historians say, was to burn off excess inventory for that prestigious pulp. If so, it was an odd decision considering that Popular had recently restored Adventure to a twice-a-month schedule, and that The Big Magazine's lineup was almost a Murderer's Row of pulp aces. Based on what I've read of it so far -- I'm not quite halfway through its 224 pages -- my hunch is that The Big was more of a dumping ground for subpar stuff from those top authors, some of it fairly old, to judge from the Prohibition setting of one story. "The Loyal Lady" is one of the better stories so far, nicely plotted if also marred by cringeworthy "negro" dialect. Any persistent pulp reader has got to get used to dialect dialogue; if you can't tolerate it you're reading the wrong stuff. To be fair, he also writes dialect for the backwoods soldiers, e.g. "Shore! An' we brunged her here." But there's a difference, or so I like to think, between dialect and comedy dialect. Dinah's dialogue marks her as a comedy relief character. It's embarrassing to read in a way the backwoods dialect isn't. "Oh, Lordy-lord!" she cries, warning Maybelle against first Haynes, then Rawks. "Don' yo' b'lief 'im, honey! A gemman he say anything fo' to fool a lady....Lordy-lord! We-all is sho' gwine git murdered by dat major-man!" Lordy-lord, indeed! Large historical claims are made for Gordon Young as, if not a pioneer, then a precursor of the hard-boiled style. From what I've read of him, that's more a matter of attitude, as might be seen here as well as in his more relevant Don Everhard stories, than of style. Young's style strikes me as stilted, but in the melodramatic setting of "The Loyal Lady" it feels almost correct. But it's the twist ending and the overall feeling that anyone could be a spy that give Young's story an almost-modern flavor.
Posted by Samuel Wilson at 3:59 PM