'What this country needs is more Chinese.' 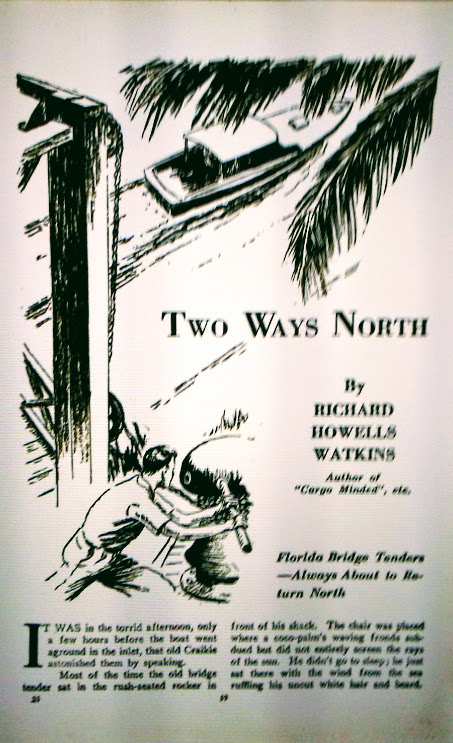 Richard Howells Watkins had a forty-year career writing magazine stories for pulps, slicks and digests. You see his name a lot in the detective and general adventure pulps, usually contributing stories with nautical or auto-racing themes. He was the sort of dependable writer who was nobody's favorite, and perhaps not very memorable today, but usually worth a read. "Two Ways North" (Short Stories, January 25, 1939) deals with smugglers on the Florida coast, though exactly what they're smuggling, or if they're smuggling at all, is open to question most of the way. The story reads almost like a satire of smuggler stories as two men down on their luck dream of earning their way back north by earning a reward for some heroic feat. Denny Coyle, a failed gambler with an Irish brogue, and Jim Bush, a former waiter, are little better than tramps, barely earning a living helping Old Craikie operate a capstan bridge to let boats through. They hope to make some extra coin helping a motorboat "alive with men" that's apparently run aground nearby, but the surly Cuban captain rebuffs them. That makes our heroes suspicious. Jim deduces that the Cuban must be smuggling illegal Chinese immigrants. "These Chinks are bringing us our stake," he tells Denny, suggesting that they blackmail the Cuban with a threat to report him to the government. Since Denny worries about the Cuban knifing the, since "These Cubans live in the present," Jim suggests that they go straight to the government and collect a reward for ratting on the smuggler. Now Denny has a moral objection; it wouldn't be fair to the poor Chinese. The ensuing debate might just as easily take place 78 years later.

"That wouldn't be honest," he stated coldly.
"Why not?" argued Jim, heating up under censure, "He's sneaking a bunch of Chinks into the country, ain't he? Don't he deserve to be caught?"
Denny was like a rock. "Where's the harm in it?" he demanded. "What this country needs is more Chinese."
"Huh?"
"Well do I remember my old man saying, many's the time when he was out of work, 'Twinty two families in the house an' devil a Christian in the lot but wan Jew an' two Chinese.' We'd of starved, I'm tellin' you, if it weren't for a fat yellow grinnin' Chinese that owned a grocery around on Pell Street."
With more energy he added, "An' don't be callin' 'em Chinks. A Jap is a Jap but a Chink is a Chinese, an willin' to be white if ye give him half a chance."


There proves to be an easy solution to this impasse. Once Jim suggests that Ferrer, the Cuban, could be smuggling in a Japanese, Denny jumps to the conclusion that this theoretical person is a spy "comin' in under cover because we're tightening up on some of our bowin' and apologizin' to Jap visitors." The government will really pay out for reporting a spy, he concludes, while Jim argues for quantity over quality, assuming that the feds will pay more for a boatload of Chinese illegals. "Where's your patriotism, man?" Denny protests at this thought. "Up North," Jim answers.

Watkins cleverly avoids making clear whether or not the man our heroes eventually discover is Chinese or Japanese. Sure, the man cries out, "No Jap! Chinese!" before jumping ship, and sure, Denny boasts of his ability to tell Chinese and Japanese apart, but just because "the face was the face of a Chinese if Denny Coyle were any judge," that doesn't mean Denny's any judge. In any event, "the Oriental" turns out to be smuggling diamonds, leading Denny to observe, on his assumption that the "yellow man" was Chinese, that "the Chinese are a clever race -- sometimes too clever, belike!" Diamonds actually draw a pretty good reward that Jim and Denny share equally with Old Craikie, who has also talked of "going North" soon. The end of the story explains the title: Craikie dies moments after putting his share of the bills in his sock. To Denny that means "the old one's further North than you or me will ever get if we go to the pole." Modest as it is, "Two Ways North" may be the best thing I've read from Watkins to date.
Posted by Samuel Wilson at 3:53 PM