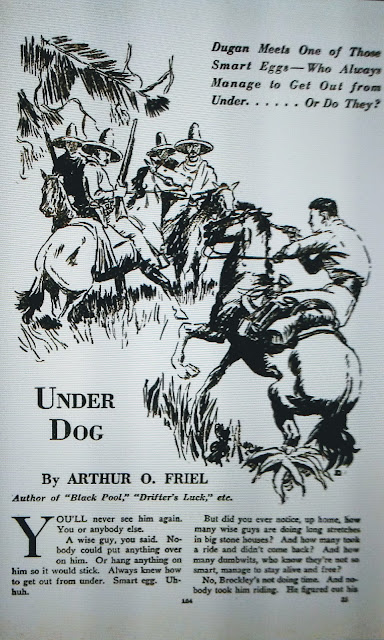 Imagine the stories Arthur O. Friel might write about Venezuela in the 21st century: the intrigues of Chavistas, dissidents and military men, Cubans and Americans, etc. Venezuela was Friel's meat. He explored the territory himself and wrote both fiction and non-fiction about it. Friel was one of the star writers for Adventure in the 1920s, but his output slowed over the course of the 1930s, and his work became less ambitious. In 1938 he created the character Dugan, whose exploits are reported by raconteurs addressing the reader in the second person, a favorite Friel device. As noted often here, because most pulp writers were freelancers, their characters were rarely considered the intellectual property of any one publisher. As a result, Dugan could wander back and forth between Adventure, where he first appeared, and Short Stories, where "Under Dog" appeared in the January 25, 1939 issue. The narrator has detailed knowledge of Dugan's exploits, though he doesn't take part in the story he tells. He claims to be a "side-kick" of Dugan, though I suppose he could be Dugan himself, whom he describes as "a husky lad about my size with big fists and no brains." In other words, a conventional tough-guy pulp hero who falls in with a suspicious band of traders after saving an accused thief they'd been shooting at. The lead trader is suspicious because he talks funny: "The words were English -- or North American -- with something a little queer in the long ones." He calls himself Brockley but pronounces it "Broccoli" ("Some kind of wop cabbage," the narrator explains). Brockley's unlikely mission is to bring a consignment of frying pans across the border from Venezuela to Colombia, Dugan has his doubts; the pans will most likely be melted down so the metal can be put to more militant use. He doesn't need the money Brockley offers him, but he hopes to shake "some people who didn't like him" who'd been following him north from some previous adventure. He'd be a minority of one if not for the loyalty of Tonio, the Indian he rescued.

As it turns out, Brockley has firearms very carefully packed within his load of frying pans, and he's set up Dugan to be the fall guy if the sale goes sour. And of course it does go sour, thanks to a German working for the Venezuelan government, who gives Friel the opportunity to write a more blatant accent than Brockley's. It's actually not as extremely vaudevillian as some writers got; the accent is mostly restricted to "ch" for "j" and the occasional hiss. He's about to have Dugan executed for gun-running when Tonio speaks up to exonerate him and explain his own beef with Brockley -- the man who killed his mother and left him to be raised in a squalid Indian village. The unimpressed German's going to shoot everybody anyway, but Dugan and Tonio fight their way out, while Brockley is killed in the crossfire, denying Tonio his revenge. "It's funny, the way wise guys go flop and dumb birds like me and Dugan keep drifting along," the narrator reflects. In fact, Dugan had at least two more stories in him, at least according to the FictionMags Index, one appearing the same month in Adventure. This particular short story is a far cry from the epic stuff Friel wrote in the Twenties, but even late in his career -- his last pulp stories appeared in 1941 -- he had enough juice to make his stuff readably entertaining.
Posted by Samuel Wilson at 3:37 PM