'You are the hardest man to get to agree with anybody I ever saw. You won't even agree with yourself.' 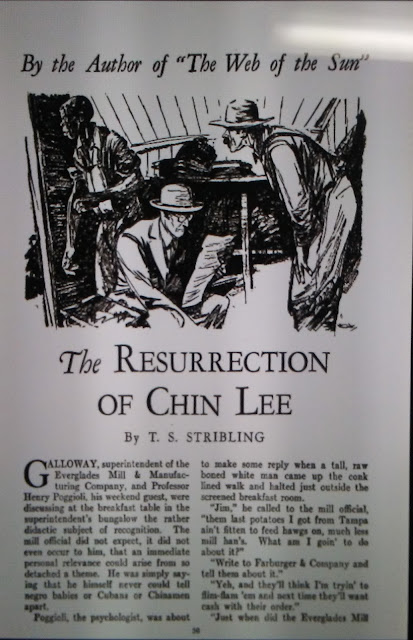 If you asked a pulp reader in the 1930s which writer for the story magazines had the best chance of entering the American literary canon, he might not say Dashiell Hammett, and he certainly wouldn't suggest H. P. Lovecraft. The reader might well nominate T. S. Stribling instead, because he had something, as of 1933, that neither Hammett, Lovecraft or probably anyone else writing for the pulps had even a chance of having: the Pulitzer Prize for the best American novel of the year. Stribling received that accolade for his 1932 novel The Store. In 1932 he also published three mystery stories in Adventure featuring his psychological detective, Dr. Henry Poggioli. If Stribling is remembered at all today, it's for the Poggioli series that became his meal ticket in later life, after publishers no longer accepted his novels. On the evidence of the few stories I've read, Poggioli combines Holmesian powers of observation with an inclination for sweeping generalizations along the lines of "only such and such a person would do this particular thing." With possibly a sense of irony, the conscious satirist Stribling addresses the subject of generalization in one of his 1932 Poggiolis, "The Resurrection of Chin Lee" (Adventure, April 15), which turns on a Florida mill owner's inability to tell Chinese people apart. Absurdly, Mr. Galloway makes this claim having known only one Chinese man in his whole life, his cook Chin Lee. "I see him only now and then, and I don't remember how he looks from one time to the next," Galloway explains.

"That really is odd," Poggioli replies, "I suppose it is a race obsession. You are so obsessed with Chin Lee's Chineseness, if I may coin a term, that your recognition stops there and doesn't reach the individual. It is probably based on our Anglo-Saxon superiority complex."

Cue the arrival of a perfectly stereotyped, dialect-speaking black security guard, who reports that he's just found Chin Lee murdered on the dock, with a bullet hole in his head. Desperate to clear himself, on the assumption that Galloway will accuse him of the murder, Sam has to admit that he didn't hear the gunshots because "take mo'n a pistol to wake me up when I'se night watchin'." Of course Poggioli will investigate, but when Sam brings him to the crime scene, Chin Lee's body is gone. The psychologist speculates that the body has been picked up and taken away with care, and not thrown to the sharks, because there's no trail of blood. From this he deduces that the killer is a woman. "She could not endure the thought of her lover's body being thrown to the sharks or given over to any stranger who found it, or to the callousness of a coroner's jury," he assumes. The killer must be a strong woman, capable of lifting and carrying a corpse Sam estimates at between 150 and 160 pounds.

One virtue of the Poggioli stories, however, is that Stribling is willing to let his detective follow a train of thought to a dead end. Poggioli's speculations become moot when Chin Lee is discovered alive in his shack, while the detective and his companions are searching for clues among the assumed victim's personal effects. Chin Lee claims to have knocked himself out trying to reel in a fish, only to come to and go home. Something isn't right, however, and with a little additional data Poggioli figures out what it is. As if fully aware of the inability of both Galloway and (apparently) Sam to tell Chinese men apart, a smuggling ring based in Cuba has been bringing in illegal immigrants one at a time, each taking a turn as Chin Lee until the next one comes to take his place. One of these Chin Lees actually was murdered, but to Poggiloi's possible disappointment the murderer isn't a woman. I won't spoil a mystery that people might read (this issue of Adventure has been scanned and uploaded to the internet), but I wonder whether it's worth it not to spoil this shaggy-dog tale. It's mildly amusing in a characteristically sardonic way -- as usual, Poggioli is surrounded by idiots -- but if Stribling had some point to make about prejudice or stereotyping, it's blunted by his own impulse to reduce characters like Sam to their dialects. As a matter of style, I get the impression that Stribling saw the Poggioli series, at this time at least, as self-conscious hackwork that paid the bills between novels. If you want to see him at full power, check out the available chapters of his 1923 serial Fombombo, an epic satire about a Babbitt in the middle of a South American revolution. For all I know, The Store might be worth a read as well, even if the actual canonical writers of Stribling's time looked down on Pulitzer winners -- until they got their own, that is.

Posted by Samuel Wilson at 3:31 PM