'You, Baas, are like the man who makes his hut a refuge for mombas' 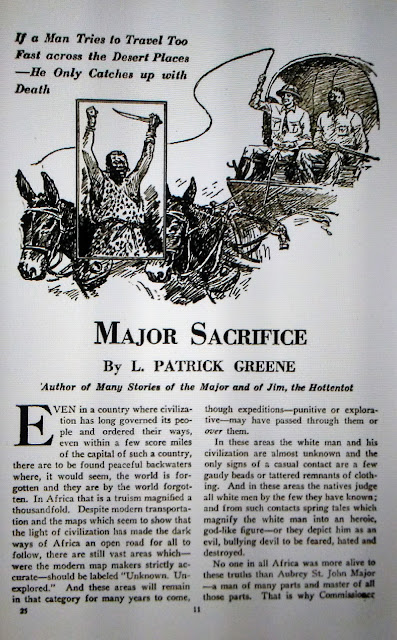 The most successful 'white hunter' character in pulp fiction set in Africa was L. Patrick Greene's creation Aubrey St. John Major, better known simply as "The Major." Greene created the Major and his sidekick, Jim the Hottentot, for Adventure in late 1919. In 1921 they all moved to Short Stories, where the Major became a fixture, with possibly the most covers of any character in that magazine, for the next quarter-century. Strictly speaking, the Major is a good bad man or lovable rogue, wanted by the colonial authorities in his earliest adventures for illegal diamond buying but typically targeting men worse than himself. He evolved into a more standard good guy troubleshooter over time, while Jim evolved from something close to comic relief to one of the more rounded black characters in all pulp. Greene was conscious of his characters' evolution and made them conscious of it as well. In "Major Sacrifice," (Short Stories, January 25, 1939) Jim remarks that he once would have been fooled like the story's Zulu antagonists by the Major using his monocle like a magical "third eye" that can tell truth from lies. At the same time, Jim still feels a slight dread whenever he looks at a photograph. "We black ones are crammed with foolish fears," he reflects, "That is why white men impose their will upon us so easily." For all that, Jim has an exceptional relationship with his baas that allows for considerable criticism of what the Hottentot sees as the Major's misplaced idealism. Jim is deferential without being servile, and the dialogue between the two characters is sometimes the most interesting part of a Major story. Here's an exchange from "Major Sacrifice" in which they debate what to do about two disreputable characters trailing them on the veldt. The protagonists speak in Jim's dialect, allowing Jim full articulation of his thoughts.

"If they follow us, Jim."
"Oh, but they do, Baas. You know they do. I have shown them to you. Two men on horseback, Baas, each leading a pack horse. You have seen them. You have seen their campfires. They are clever, too. They know the veldt. Always they keep a day's trek behind us and ride so cunningly that none can see them."
"Yet you saw them, Jim."
"Ah, yes, Baas," the Hottentot said with simple conceit, "but I am not an ordinary man."
"By jove, you're not," the Major drawled in English.
"Golly, damme, no," Jim chuckled.

***
"And so they are evil as i said. Their purpose -- as concerning us and him -- is evil."
"That is my fear, Jim," the Major admitted.
"Ou, Baas. Then why did you not let me go back and kill them as I desired. Wo-we! It is not too late. let me go back now. In the night's darkness I will reach their outspan. for them there will be no pain -- that I promise. I will only lengthen their sleep into death. But of course," he continued sarcastically, "that is not the way of white men. Most assuredly it is not your way. You, Baas, you are like the man who makes his hut a refuge for mombas, though he well knows that by so doing he endangers his own life. Why do not white men kill their enemies?"
"The evil ones do, Jim. The others refrain -- partly, I think, because they fear to destroy what they cannot create."
"Wu! That is folly, Baas. Men can create men -- else the world would now be empty. To kill an enemy is nothing, Baas. Death is nothing. No more than the snuffing out of a flame. And it's better, i say, to snuff out one flame that lights a hut than to permit it to grow into a big fire which will destory a kraal." Jim shook his head in mock reproach and then continued, "But perhaps the evil spirits of the waste lands will deal with those two evil men. Yet even that you will prevent if  you can. You -- how well I know you, Baas -- will risk your own life, if necessary, in order to save them."


While Jim can be very frank talking with the Major, Greene reminds us that they're not equals, though his conceit is that Jim, rather than the Major, enforces the limits of their friendship. Shortly after this exchange, Jim observes, almost self-mockingly, that "My only pleasure is to serve you." The Major counters, "What is this talk of service, Jim," and places his hand on the Hottentot's shoulder in "a gesture of friendship and protection." The Major may well see Jim as his friend in some truly egalitarian way, but Jim returns the sentiment with eyes that "glowed with the light of devotion and service." And even if Jim is right to chide the Major later for allowing evil to enter the story's happy valley, you get the sense that Jim himself recognizes that his Baas's sentiments are not contemptible foolishness but the idealism of a higher being.

The story as a whole is far less progressive than Greene's portrayal of Jim. The Major has been hired by a fiftysomething English woman to track down her husband, Henry Grey, believed lose in Africa. Her intentions become clear when she offers our hero 5,000 pounds for Henry's signature on a document, and 10,000 pounds for proof of his death. The other two trackers come into the story when Mrs. Grey learns from local gossip that the Major is not as unscrupulous as he himself had led her to believe. As for Henry Grey, "his true environment was an English suburb," but the Major and Jim recognize him from a photo provided by Mrs. Grey as the man who, under the name of "Kind Heart," somehow became the chief of a band of refugee Zulus and others living in a hidden "Happy Valley."  The situation is so preposterous -- Greene presumably has Lost Horizon and similar stories in mind -- that he can barely explain how it came about, other than to offer that Grey "knew his people. He could speak as they spoke. He could think as they thought. And that ability is the hallmark of white men who are successful in their work with natives." Unsurprisingly, some restless young men of the makeshift tribe chafe under Kind Heart's control, goaded by a pretentious would-be warrior whose refrain, "By the blood of Chaka!" is tiresome even to his own comrades. This gives our heroes an additional set of antagonists to worry about, but you probably can guess that everything works out all right in the end, the Major becoming an intermediary in a long-distance divorce proceeding after the Happy Valley elders beat sense into the rebellious youths. As a story "Major Sacrifice" is one of the sillier entries that I've read in the series, but the series as a whole remains fascinating to discover bit by bit as Altus Press prepares a complete edition and more scanned issues of Short Stories come on line. Look for more of the Major and Jim on this blog in the future.
Posted by Samuel Wilson at 3:59 PM