VINTAGE PAPERBACK OF THE WEEK: Georges Surdez, THE DEMON CARAVAN (1927) 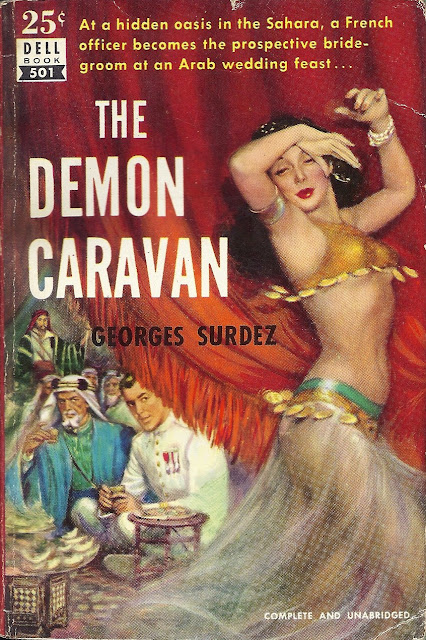 Surdez wrote many long stories for Adventure that could have passed for novels but published in long form only rarely. As far as I can tell, Demon Caravan (the title refers to a type of desert storm) was written for publication as a novel instead of appearing in the pulps first. It reads as if written for a different market, which isn't necessarily to Surdez' advantage. It's more old fashioned in its construction than his contemporary pulp stories, in that it takes quite a while for the actual story to begin. Novelistic conventions require an elaborate establishment of the protagonist, Captain Paul Lartal, in his new environment, an Algerian colonial outpost, and the introduction of several nearly interchangeable supporting characters who'll be left behind when Lartal goes on the novel's true mission. There's a good desert battle scene in the middle of this, but nearly half the 214 page novel (that's the page count for the 1951 Dell paperback) is buildup for Lartal's expedition into a hidden oasis. 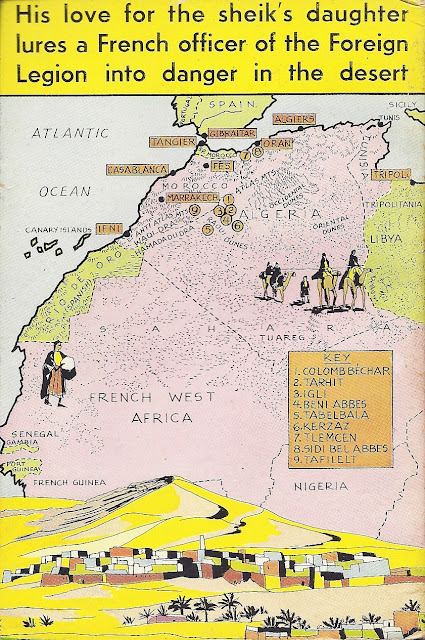 Some collectors are fond of Dell's back cover maps, but give me more hard-boiled copy any time.


We're somewhere between Lost Horizon (yet to be written) and L'Atlantide (which Surdez may have read in the original French or in its English translation in Adventure) when Lartal, accompanied by his faithful Arab sidekick Tlemsani reach this desert utopia. What we have here is a progressive Muslim community founded by people tired of war, led by a charismatic chieftain and his French son-in-law, a fugitive from his own army for killing a fellow officer. When Lartal arrives the son-in-law, who converted to Islam and took the name Si Khalil, is the leader who consults with a representative assembly of guild elders and the like. Just as Si Khalil in his youth fell for the chieftain's daughter and married her, so Lartal is smitten with Si Khalil's daughter Morjana, for whom her father has been seeking a suitable mate. There is, however, a rival suitor who threatens to disrupt Si Khalil's utopia. Omar ben Azziz is a type the world has come to know all too well in the 21st century. Surdez calls him a Senussi, but we'd call him an Islamist. "While all are Mohammedans here, tolerance has prevailed," Si Khalil explains, "The young wish to change that.

Of late there has come about a renewal of religious fervor. There are more ways than one to interpret the Koran. The military spirit has spread among the schoolboys in some way. Under their tuition, the boys are growing up to hate strangers, men not of their faith, although they have never seen them. Instead of warriors for protection, they maintain we should send them out for conquest.


Omar is the sort who has a quote from the Koran as the self-serving answer to every question. He uses the arrival of Lartal to stir up dissent against Si Khalil, arguing that the granddaughter of the great founder, though half-French herself, should not be married off to an infidel outsider. With a pessimism that probably appears prophetic now, Surdez shows Si Khalil's position crumbling until he decides that he, Morjana and Lartal should escape and seek shelter with the French. Omar's ascendancy has split the ruling family as Yusuf, Si Khalil's son by another mother, takes the side of the supposed holy man. Over the second half of the novel Surdez has been ratcheting up the tension, and in the final chapters he lets rip as the good guys make their break, though not without casualties or without a timely and brutal act of filial piety by the conflicted Yusuf. The second half of Demon Caravan makes the whole worth reading, so long as you understand that it's more romantic adventure than pulp fiction. It's still unmistakably Surdez, and it makes you sadly confident that he would have handled himself well in the era of paperback originals had he made it there instead of dying shortly before at the age of 49.
Posted by Samuel Wilson at 4:59 PM