VINTAGE PAPERBACK OF THE WEEK: Richard S. Prather, JOKER IN THE DECK (1964) 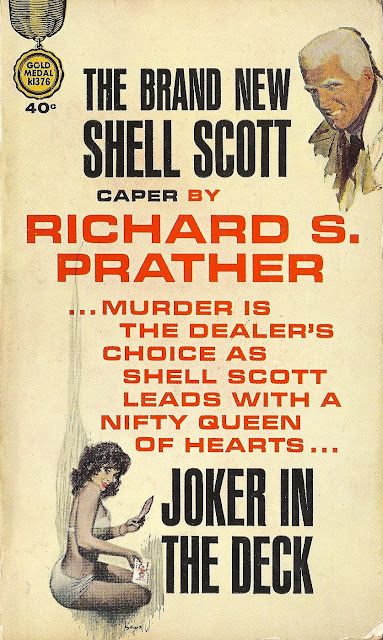 Richard S. Prather didn't publish in the pulps. Instead, after establishing himself as a novelist and the creator of Sheldon "Shell" Scott, he landed stories in the hard-boiled crime digests of the 1950s and 1960s, including a short-lived Shell Scott Mystery Magazine. Prather maintained a blistering pace through those two decades -- Joker in the Deck is one of three 1964 novels -- but slowed down afterward, partly due to disputes with publishers. Shell Scott became a logo as well as a character, his cotton-topped head adorning every new paperback original. He's a ladies' man but not quite the swaggering stud one might expect from hard-boiled detective stories from his heyday. Joker sometimes exposes an anxiety bordering on the naive in the face of aggressive or deviant sexuality, as if Prather's audience were slightly younger than the average. Shell is also a political conservative who probably voted for Barry Goldwater in the year Joker was published. His commiseration here with a possible bad guy lamenting the huge, socialistic tax burden the government imposes on him may be the closest Shell Scott comes to empathizing with criminals. Usually he gets a bit sanctimonious about crime, particularly the drug trade, when he isn't in his more typical happy-go-lucky horndog mode. You might be able to divide detective and crime fiction into two categories: those stories that try to humanize criminals, whether they're the protagonists or not, and those that make comic-book heavies of them. In the few Shell Scotts I've read Prather falls into the latter category. 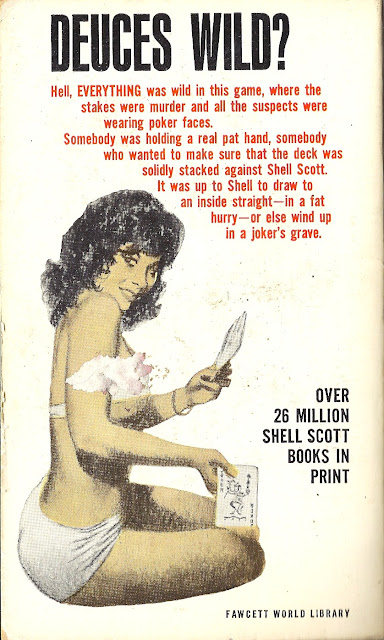 In Joker Shell gets involved in real estate intrigue on a coastal California island. He's getting deep into a game of strip poker with his buddy Jim Paradise and two dames they met at a promotional event when Jim gets the news that his business partner, who proves to be his brother under an alias, has been murdered. In short order someone shows up to murder him, but Shell saves the day. In the aftermath, however, Shell fails to notice someone dragging the would-be killer's body away. Brea Island is shared by Jim's development project and a baby-food factory that appears to be improbably mobbed up. The mob guys, led by an ex-con who learned organic gardening in stir, run the Da Da plant for its owner, who arranged with Jim's brother to shuffle ownership of the island so the baby-food magnate as part of an elaborate tax dodge. Shell may hate high taxes as much as any red-blooded American -- and in those days they were sky-high compared to now -- but he also knows lawbreaking when he sees it. He also suspects that there's more going on on the island than meets the eye. Are the mob guys using the baby-food plant as a front for drug smuggling? Has oil been discovered on Brea Island? Either could explain the book's lethal attempts to consolidate ownership of the island.

As he pieces the story together Shell maintains an interest in the two women who played strip poker with him. Laurie is the good girl of the two while Eve (introduced on the opening page as "a long-legged, voluptuous looking, slinky, busty hippy bomb, an Adam bomb") is too aggressive for Shell's taste, tempting though her body is. For all his presumed experience, Shell seems to have an adolescent's sense of discovery every time he meets a beautiful woman, as well as a detective novelist's impulse to attempt original descriptions of female pulchritude. It's with a "galvanizing shock" that the big he-man discovers that Eve isn't wearing a brassiere in one scene, and "when Eve leaned forward and -- not aware of what she was doing, I presume -- sort of wiggled her shoulders joyously from side to wild side, there was almost as much commotion under that blouse as two people kicking each other under a blanket."  There's a different sense of discovery, even as he remembers a past experience, when Shell enters a suspicious niteclub. Presumably his memory of San Francisco prepares the reader for what follows. The tone is set by a weird woman with "a face to be presented only to steel mirrors, the face on the bride of Death." Shell shudders as he watches this apparition chat with Eve, and his evening grows only more shuddery.

I moved across the room to the bar, a bit nervously, because for some reason I didn't want to be seen, not by anybody who knew me. I didn't know why for sure; I just knew I didn't want to be seen. Tension built up in me gradually, rose along my spine and gathered in a knot at the base of my skull....I looked around. At men and women, sitting at tables, drinking, talking. There seemed nothing unusual. But then the scene seemed to shift. It was the same -- yet different. I had looked right at it, it was there in front of my eyes, but it hadn't impressed me until now. Men and women were sitting at tables, true; but at no table was a man sitting with a woman.


Really, Shell? This is your 24th novel, and you've had more adventures than that, and it takes you that long to notice you're in a gay bar? Richard Prather is a far better writer than John B. West, yet on this point I prefer Rocky Steele's hard-boiled contempt for and familiarity with the gay scene to Prather's horror-movie buildup to his awesome realization. The issue isn't whether one is more or less homophobic than the other, but that a hard-boiled guy like Shell really ought to take such things for granted, if not in stride, at this point in his storied career. Maybe more devoted readers can tell me if this is typical of Shell Scott -- this overall feeling I had on reading Joker in the Deck that Prather's hero is kind of a big kid at heart. That point aside, I liked Joker quite a bit. Prather seems to write authoritatively on the legalistic shenanigans involving the transfers of title to the island, and on other subjects he wears his research lightly. In a story like this expertise (or the convincing simulation of it) help hold the reader's interest because he feels he's learning something about Shell Scott's world as well as this particular mystery plot. I may not agree with Shell's politics but I accept them as an artifact of his time -- by which I don't mean that they're obsolete -- and Prather has as much right to incorporate them into his fiction as anyone to his left. I have another Shell Scott on my shelf -- to give things away a bit, it's actually half a Shell story -- and on the strength of Joker I'll probably be getting to that one sooner rather than later.
Posted by Samuel Wilson at 4:22 PM