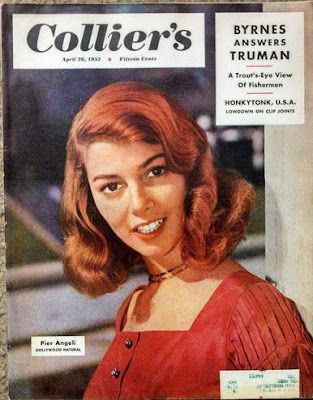 Pier Angeli graces the cover of this issue from the last full year in which Collier's could rightly be called The National Weekly. On the fiction front this issue features a western (or northwestern) by pulp veteran Tom W. Blackburn. He'd toiled in the pulps for more than a decade, scoring only one story in the Saturday Evening Post during that time, before he saw more slick success at the start of the 1950s. "Cragar's Girl," a fairly tough story of the sale of some timberland, was Blackburn's third and last story for Collier's, and practically his last piece of magazine fiction. His future lay in Hollywood, where he would shortly score a double-hit as the writer for Disney's Davy Crockett series and its blockbuster theme song.

Robert W. Krepps broke into Collier's around the same time Blackburn did, in 1950, but after much less dues-paying. Krepps broke into the pulps in 1947 and continued to publish in the quasi-pulp Bluebook until its demise in 1956, not long before the end of Collier's. This issue's "Nomad of the Dusk" is one of those old pop-fiction reliables, the animal story, and probably the most violent tale in the magazine that week. Durgi the dog-otter -- how he has a name is a mystery to me -- struggles to provide for his bitch (in this context, a slick can use that word) and her brand-new litter, running afoul of a vengeful farmer in the process. This story's "bring out the gimp" moment comes when the farmer unleashes "Long Willie," which at first I assumed to be his pet name for a rifle or shotgun. It proves to be an "English hob or ferret," portrayed by Krepps as the servile psychopath of the animal kingdom. It's "a berserker among the beasts, living only for the thrill of slaying....Entirely dependent on man for its sustenance, it is yet more feral and bloodthirsty than any untamed animal; man has bred it so." The climactic fight nearly lives up to this build-up, including the random slaughter of one of the baby dog-otters. "Cragar's Girl" is quite good but for once I have to say an animal story is the highlight of a fiction magazine. Krepps moved on eventually to specialize in novels set in Africa and film adaptations. Check out the whole issue at your leisure at unz.org.

Posted by Samuel Wilson at 1:19 PM