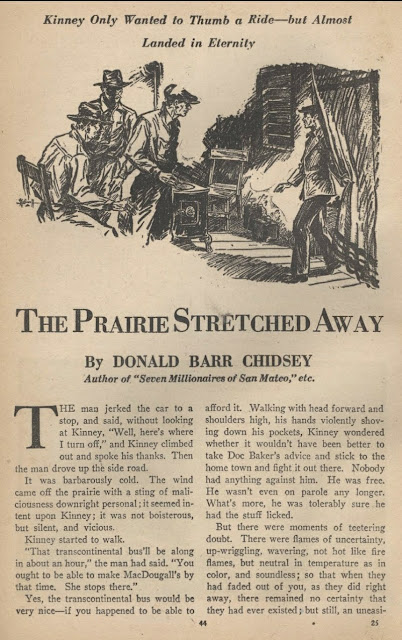 Donald Barr Chidsey worked in a wide variety of pulp genres from historical swashbucklers to contemporary crime stories. In "The Prairie Stretched Away" (Short Stories, July 25, 1940) he tried his hand at drug humor, though the story is probably on funny in retrospect. It intends to be a taut, suspenseful story, and I suspect that Chidsey brought a sense of irony to his sensitive subject matter, since narcotics are, in fact, instrumental to the story's happy resolution. The hero, Kinney, is introduced hitchhiking, hoping to make his way across the country after kicking what seems to have been a bad drug habit. Chidsey portrays a bleak, empty landscape, emphasizing his hero's isolation, until a truck nearly sideswipes Kinney on the shoulder of the road. As the truck goes on its way, Kinney finds that he's stumbled onto a line of wires that lead to the underside of a nearby bridge. Sure enough, he's also stumbled onto a band of gangsters who plan to blow up the bridge when a bus passes over it. The killers are professional and impersonal; they don't know who specifically ordered the atrocity or why it was ordered; it's all just a job of work to them, and though they're not to thrilled about the idea, they realize that they're going to have to kill Kinney as well. They're hiding out and shivering cold in a nearby shed and Kinney proposes to make himself useful by getting some kindling for a fire. You see, before they got to the shed, they passed over a stretch of weed that's actually a stretch of weed.

Kinney, seeing those weeds in the beam of the flashlight, swallowed hard and tried to think about something else. Sure he knew them! For he had not only used the stuff but when he got hard up he'd peddled it and packed it into cigarettes. So naturally he knew those weeds. They'll grow wild about anywhere. There's nothing fastidious about them.


Naive as I was, I thought, when his addiction had been mentioned earlier, that Kinney had been hooked on harder stuff than this. I had forgotten that circa 1940 many folks found it hard to imagine harder stuff than marijuana, the weed with roots in hell! Fearful though he is of falling back into addiction, Kinney calculates that his only way to thwart the bombing and escape alive is to set a heap of the stuff on fire -- Chidsey emphasizes that the weeds are sun-dried and ready for use -- and get both his captors and, inescapably himself, high as a kite. This gives Chidsey an opportunity to experiment, based on what experience I dare not say, in portraying a marijuana high.

He heard an automobile. This was with one mind; the other mind said that there were no automobiles in the world, and what of it anyway. But he heard this. It was far away. He glanced first at the tall man, then at the short one. Had they heard it too? Was it possible they didn't hear? Were they deaf?
After a long while the taller man got to his feet and moved slowly toward the door, which was very far away. He did not seem to walk; he seemed to float along. His lips were moving but Kinney did not hear any words.

*   *   *
Through every thinnest corporeal tissue and every minutest vein he could trace the circulation of his blood along each inch of its progress. He knew where it slowed, and where it churned fitfully ahead. He knew when every valve flapped. His heart had been beating so loudly that he was amazed that the others did not hear it, but now the shack was filled with glory that suffocated, and his heart labored no longer, a mere pump, but had become a fountain; the jet surged upward and struck against the roof of his mouth, and fell noisily back, splashing and scampering through his body, so that he tingled all over. Maybe he was having a hemorrhage? He thought that he would die very soon.


Meanwhile the tall gangster falls into  the telltale giggle of the marijuana addict familiar to all fans of Reefer Madness. He then grows agitated and violent, like the marijuana-smoking Mexican bandits of many another pulp tale. He's convinced that Kinney is trying to run away while Kinney is convinced that he isn't moving at all. He threatens Kinney with a shotgun that Kinney perceives to be "half a mile or more away. He fires, and Kinney hears "a dull, delayed, apologetic 'boom' which tumbled into oblivion, as though ashamed of itself." This failure reduces to gunman to helpless laughter. All the while, the short gangster remains in a stupor. Finally, when neither criminal can function, Kinney staggers out to catch the transcontinental bus, then wakes to learn that he's a hero, offered a big reward by the bus company, but like a proper pulp hero, Kinney would rather have a job. His mentor, the man who saved him from addiction, approves of his choice and tells him, "Give you a job? Why, if that's all they give you I'll go out and dynamite a few of their buses, myself!" That's so pulp, but so's the whole story.
Posted by Samuel Wilson at 6:33 PM