'I regret that one cannot speak freely in France these days unless one carries a bomb.' 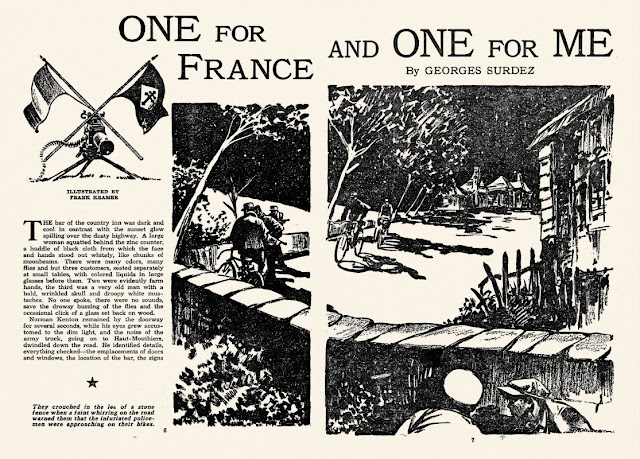 When World War II came, Georges Surdez, who had been the Foreign Legion writer par excellence in pulp, made the new war his subject, whether it was fought by the Legion or by others. With the end of the war came a new shift, or at least the hint of one. "One For France and One For Me" (Adventure, January 1946) sees Surdez moving in an almost noirish direction, with an abrupt cynicism about the French Resistance so soon after the war. Norman, an American point-of-view character returning to a town where he'd been harbored by resistance fighters during the war finds himself caught up in a manhunt that appears mostly to be a settling of scores. His old buddy in the resistance, Frederic, is still a fugitive, only now hunted by a sovereign French regime that sees him as no more than a bandit. The more Norman learns about the war within the more, the darker and murkier the picture grows. Ordinary Frenchmen took advantage of both the Resistance and the Nazis to get rid of personal enemies, and the same situation holds, more or less, now that the war is over.

Suppose you are an employee in some large firm, next in line for a good job. You make your choice between the Gestapo and the Resistance. In the first case, you write, 'So-and-so takes strolls near the railway station often - he notes the troops passing through.' That's enough to get him picked up. To the Resistance you write: 'You wonder who tipped off the Boches about the aviator? Ask so-and-so.' And you get your promotion while the other chap's in jail, or after he's killed. Or say you're a middle-aged man with a pretty wife younger than yourself. She has a cousin of whom she's very fond. There's nothing wrong as yet, but you think there may be soon. A couple of notes and he is arrested as hostage, or deported to Germany. It's the lettre de cachet within the reach of all.


Frederic has many scores to settle. He wants to publish lists of informants that the new government would rather see suppressed. He especially wants revenge on a pathetic informer who turned his own daughter, the resistance fighter's lover, over to the Gestapo, supposedly on the naive assumption that she would quickly confess under pressure. She proved tougher than anyone thought and ended up dying under torture without naming names, and her blood is on her father's hands. Over time, Frederic killed the Germans who'd tortured his love, but his vengeance is incomplete while the old man lives. He's a juror for the trial of Frederic's grandfather, a fascist and collaborator. Tricking Norman into acting as his escort, Frederic invades the courtroom carrying a bomb. He wants the opportunity to denounce several of the jurors as crooks or collaborators, but wants to act as judge, jury and executioner for the old man. Living up to the principle that gave Surdez his title, Frederic kills his grandfather ("One for France"), then delivers the coup de grace to his true enemy after the spectators virtually lynch him ("One for me."). As a bonus, Frederic finally shoots himself. Almost inevitably, Norman learns that Frederic's bomb was a fake. A fellow American laughs cynically, but Norman "had believed in the bomb. And then, when you thought of Emilie and the others ... you did not feel like laughing at all." For one of Surdez's first postwar stories, this is an extraordinary piece of work.
Posted by Samuel Wilson at 6:55 PM